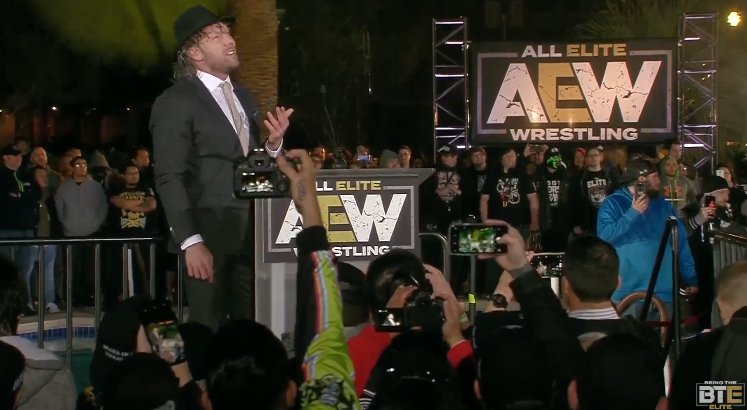 Kenny Omega has officially signed with All Elite Wrestling.

Omega made his first appearance for the promotion at tonight’s AEW Double Or Nothing Ticket Announcement Party at the MGM Grand Hotel & Casino in Las Vegas, Nevada. He said he and his friends will now be able to show wrestling fans what “change the world” means.

Omega noted that he didn’t sign his AEW contract until this morning. He became a free agent on February 2 after his contract with New Japan Pro Wrestling expired. Omega reportedly turned down a significant offer from WWE to join his friends Cody Rhodes and The Young Bucks in AEW.

Omega was billed as an Executive Vice President, the same title that Cody, Matt Jackson and Nick Jackson all share. Omega also said he is a full-time wrestler for AEW.

Omega was confronted by Chris Jericho at tonight’s event and the two tangled for a minute on the stage, setting up their rematch at Double Or Nothing on May 25 in Las Vegas. Then-IWGP United States Champion Omega defeated Jericho in a No DQ match at NJPW’s Wrestle Kingdom 12 event in January 2018.

Below are a few shots from tonight’s arrival:

Kenny Omega is in #AEW! pic.twitter.com/scATIVy9jv

Omega apologizes for making the fans wait so long for this announcement, but actually signed this morning. #AEW

“The platform we have been given by each and every one of you people that wanted something more. That wanted something different. We couldn’t just stop at where we had been we need to push this thing forward and make this bigger and better than ever before.” – Kenny Omega #AEW

They end up brawling on the stage and almost immediately get separated. Cody Rhodes and BJ Whitmer out to help break things up. #AEW

Jericho gets taken to the back, Omega puts Jericho’s hat on and does his sign off. #AEW