Home / Columns / Believe In The Dream / Once Upon A Time…

Once Upon A Time… Believe In The Dream: Once Upon A Time…
By Jessie Kaye

It’s a weird feeling.It’s weird to pack up and just leave. You leave all of your friends, your family, all the places you’re used to seeing, everything and everyone.

It’s scary, exciting and nerve wracking all in one. You don’t know whats awaits you. You don’t know who you’ll meet or what you’ll see or what new challenges and life are on the horizon. You’re on your own. You just know one thing.

It has to be done.

That’s what I felt in February when I was driving into Florida listening to “Be Our Guest,” on my iPod with my mom in the passenger seat. been talking about moving to Florida for years to train at Team 3D especially after I met Dvon 2 years ago at an indy show. I hurt my ankle at a wrestling seminar in September of 2014 and after moving home to Charlotte, NC for a few months with family I knew I had to make my move.

So I did and I’m here now at Team 3D in Kissimmee, FL and I can’t tell you how glad I am to be here. I have so much to share and talk about through this blog. My goals, are to inspire, to motivate and share my journey hopefully all the way to the level of being WWE superstar. But of course I would like to start off with giving some background on me.

Professional wrestling was something I definitely fell into as if by fate. I was flipping through the channels still in elementary school before bed and there it was on the TV. I’m not sure who was on at the time but I would put money that it was Jericho and Triple H on the screen. I was drawn in immediately and after finding out the times and channels from a 7-11 campaign that was going on I from then on out was hooked. I never missed an episode.

But the thing about me and my passion and why it’s different is I had to transform my body for this. Growing up, I was out of shape, overweight, I didn’t have an athletic bone in my body. I played basketball for a rec league when I was younger but once I got to High School I accepted that I wasn’t an athlete and I gave up, I quit. 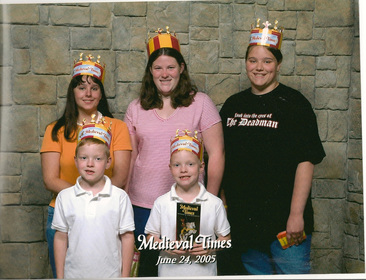 (Celebrating my 14th birthday at Medieval Times with friends and family. I’m in the Undertaker shirt duhh.)There’s no quit in me now, I have evolved incredibly but still my mind goes back to those times and I dwell in those self confidence issues. How I grew up, as overweight and out of shape and insecure with few friends and being bullied affects me on a daily basis.

That’s not an exaggeration. I criticize myself and my body every day and this business of entertainment that I chose really doesn’t help the issue. So I have continual struggle of self confidence and self appreciation but also I’m on a constant road trying to meet this standard of what society deems acceptable and what is a ‘hot’ diva or ‘hot’ knockout or a woman period! (That’s a whole other blog in itself ladies)

But I’m not here to moan and groan trust me! I want to be positive here in this bloggy! Got it? Good. But I will say, I will share my struggles because without struggle there’s no success!

So Junior year of High School, a friend drug me to a local gym. She had lost a lot of weight before me and was trying to get me to be consistent. I lost a bit on my own, but was never dedicated to the gym and didn’t get anywhere. The one light bulb I can specifically remember, is being on an elliptical machine at the lowest resistance possible and not being able to survive five minutes. Mind you, I was 16 or 17 years old and I’m out of breath and my body doesn’t want to work and I ache. The only thing I can think about is how embarrassed I am and one thing clicks in my head. I ask myself:

What is really holding you back from really chasing your dream of DOING this?

You see, I always knew I wanted to be in wrestling in some capacity. Up to that point I thought I wanted to be a creative writer for the WWE so that was my goal that I made. That was the education I was seeking after High School, and I was set with these goals. Then that day at the gym happened.

I asked myself, what is holding you back from chasing your dream to be a diva, to be in the ring, to really chase what you want? Then I answered.

So I became more consistent.

As fate would have it, I went to a CM Punk signing. There, I met one of my closest friends, Sara. She and her friend enlightened me to the world of independent wrestling and MCW, Maryland Championship Wrestling. I attended one of the shows and was blown away by the closeness and proximity of the performers and how great it was.

That night, I saw Pat Brink perform. (Remember the guy I told you about who’s helped me so much?) He was instantly my favorite, he stood out, he had a presence that caught my attention. What’s super funny, is that when I got to MCW that night I took a picture of the setup and ring and if you look closely in that picture you can see Pat talking to someone out of the curtain. That was even BEFORE I knew who he even was and he even performed, so no I wasn’t stalking him. 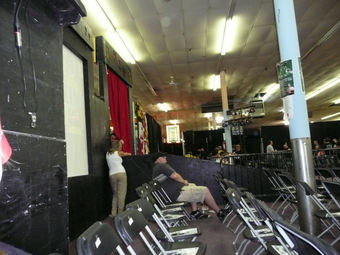 (Too funny right? This is the picture I took just of the setup and the ramp and there he was)
So, I end up friending Mr. Brink on MYSPACE YES…MYSPACE that’s where we’re going back to. He posted regular bulletins about being available for personal training and what not and I considered and finally got the courage to message him. We talked over everything and he worked with me to give me a reasonable deal and after that I met with him 3 times a week all through the summer of 2009. I was just under 200 lbs at the time and I got down to 160 lbs by October.Weight. I’ll go over weight in another blog because I could talk about that FOREVER.

I could talk about Pat too in a whole other blog too because I’m so grateful for everything he has done or has tried to do. But I’ll leave it now, to that after training me in the gym, he was the one that got me in the ring for the first time in December 2009. He got my foot in the door for MCW and MCW got me pointed in the right direction to train at Gillbergs Pro Wrestling Academy.  I was their first student when it opened in July of 2010. (MCW and Promoter Dan McDevitt definitely deserve their own blog on here too, both go hand in hand and without MCW there would be no Jessie Kaye.)

At Gillberg’s I was trained by two independent guys named Earl the Pearl and Ramblin’ Rich. I’m FOREVER grateful for these two men. They got me my foundation to build off in this industry. I always say I was brainwashed by good people and they are great people. I want to do them proud just like I have so many people to make proud back in my MCW family. I will have another blog on Gillberg’s as well and my first experiences training. I have to start writing notes about all my future blogs. :)

I trained at Gillbergs until they closed down I think in 2013 I believe the year was. I did independent shows, traveled a little bit with ROH ring crew, did seminars and camps from Summer of 2011 to Fall of 2015 where I hurt my ankle at a Les Thatcher Seminar at the Monster Factory in New Jersey. That caused a domino effect that got me to Florida.

Although the struggle at the time of the domino effect was difficult, I’m incredibly grateful it happened.

That is my journey so far IN A NUTSHELL. There’s so much more to share and talk about, so many details and people and places I have seen a long the way and it’s just getting better.

But I don’t want this to be JUST wrestling, I want to cover everything, health, fitness, self esteem or diet related. ANYTHING.

Signing off
For Now
XOXO