Believe In The Dream: Training with 24x Tag Team Champions
By Jessie Kaye

Reminder. I am no one in this industry or business. I hope to be one day, but as of now, I’m still just a girl with a dream and trying to chase it. I’m writing this blog to try and increase my following, share my story, and hopefully inspire some folks along the way.

I’m all about setting goals and reaching them nowadays and one that I’ve already completed like I’ve mentioned is getting to Team 3D Academy here in Kissimmee, FL. It’s here I’m training with 24 time Tag Team Champions the Dudley Boys.

But why was that a goal in the first place? Why not another school?

While there are a lot of prestigious schools out there with top quality trainers, my sights were on Team 3D for a number of reasons.

Firstly, as you might have guessed, Pat Brink was a huge influence of mine to get here.  When I was first training with him to lose my weight in the summer of 2009 it was him that first mentioned the school to me, but that was before he went down here himself.

Even when I got in the ring of for the first time with him, before Gillberg’s open, he always made it clear that he might have been starting me but he wanted me to wait to officially start training to get to Team 3D. I always talked to him about a first match or when I could put matches together and he always said, hopefully you won’t until you get to 3D.

I was persistent, impatient and I wanted to get started. I was only 18 and there was no way I could get out of state before finishing my education.

Bottom line, to anyone reading this who is young, looking to wrestle:

Wrestling will always be there, but YOU NEED to have a back up plan. What happens when you hurt yourself? When your body runs out? So many guys on the indies skipped an education, or skipped getting any type of skillset and then they end up not making it and HAVE NOTHING. They have nothing to support themselves, nothing to feed their families, or have no plan or future. DON’T BE THAT PERSON. GET AN EDUCATION. LIVE PARALLEL AND DUAL LIVES.

Don’t get me wrong. Wrestling requires sacrifice. But you have to be smart about it and make sure you are setting yourself up for the future whether wrestling is involved in it or not.

But I understand now why Pat wanted me to wait. Although I had incredible experiences on the way, in which I would never trade for the entire world, when you’re trained you want to be trained in ways that you don’t pick up bad habits, and bottom line you do want to be trained by the best possible. Sometimes that means moving like I did.

After Pat officially went to Florida, I saw his transformation into a super athlete through pictures and ultimately after less than a year with Team 3D, Pat got signed with FCW, WWE’s developmental at the time. In the end, Pat never made it to television due to personal decisions that he’s happy with but trained and came up with guys like Roman Reigns, Seth Rollins, Big E and more.

So he was the one that first put it in my head to get to Team 3D, so I always kinda said that it was the goal; that it was something I wanted to do. But truly I never imagined I would get there.

What really sparked the desire was when I met Dvon Dudley for the first time at an Indy show in Pittsburgh for a promotion called VOW Vicious Outcast Wrestling (CHECK THEM OUT) I’m so grateful that they ran the seminar with him beforehand and had him on the show. After learning from him at the seminar, I sat at his hip the whole night in the locker room just asking questions and trying to take in in as much as possible. 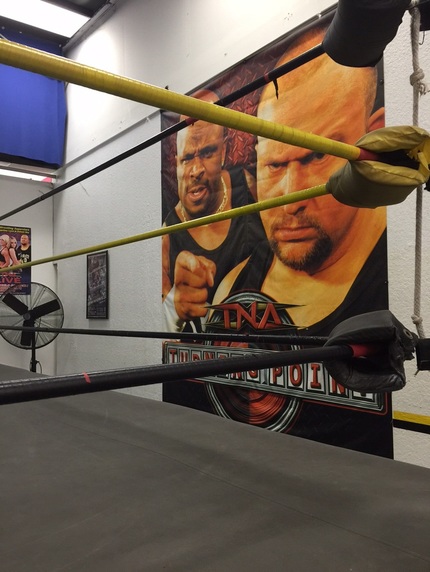 (Home sweet home at Team 3D)
The thing about Dvon, (and Bubba) they are more than willing to help and teach if you are willing to learn! These two minds have been everywhere, they have done everything, they have stolen the show at Wrestlemania in their TLC matches and there they are with all of this knowledge and are accessible at all times. That’s mind boggling to me.

But Dvon and I hit it off really well at the seminar and show and he doesn’t remember most likely but he told me, “I want you at my hip in Florida.” And that meant a lot. I’m the kind of the person that wants to be invested in. I credit that to my lack of self-esteem or self confidence but I want to be accepted by people and have them see something in me and I want them to know I have potential. Especially someone like Dvon and so I took it to heart.

It took me two years after that show, but I got to Florida.

So with 3D, you have two incredible minds for your dissection any time you need. On top of that, and another KEY issue for me, is the conditioning.

As a wrestler, you are not just a wrestler. You are ultimately an ATHLETE and a lot of wrestling schools out there don’t emphasis the athletics outside of the ring, which are HUGELY important especially if your goal is to get to the WWE. The WWE tryouts I have heard are vicious, unforgiving and merciless and I want to be able to walk into one of those one day and blow everyone out of the water. 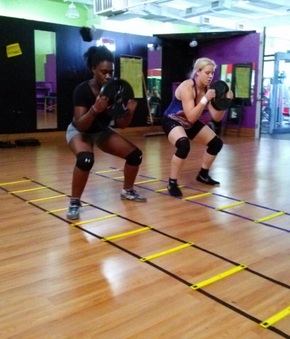 (Me and another female student, Trish, killing it on the ladder drill with 25 lb plates)
Mr. Dan Carr is our strength and conditioning coach. He was the creator of the original American Gladiator television show and was an incredible athlete to his own credit. He keeps on our asses about form, timing, teamwork, respect, not yawning, sneezing or most importantly ever saying, “what happened?” He takes each person’s strengths and weaknesses into consideration and pushes them past their limits outside of the ring so by the time you do get in between those ropes you best have you’re “A game” on mentally and physically or you won’t survive the in ring conditioning.

So what’s a day in the life of Team 3D Academy?

While there are only fans circulating the dojo in the summer of Kissimmee, FL right now it’s nice and toasty which I enjoy. I figure if I can get my wind and strength in during these conditions, while I’m in the AC I will be that much stronger. We start at 12:30pm and have roughly 1 hour and ½ of warm ups, core, and muscular endurance exercises.

From 2:00-4:30 we have our in ring work with either Dvon or Bubba. Here is the initial learning and execution of moves and linking them together.

This ends the beginner’s class. At 5:30 the advanced class starts where students are pitted together, matches are formed and finally critiqued by Bubba or Dvon. So yes I’m there from 12:00pm to about 10:00pm every Monday-Wednesday and it’s my paradise. I wouldn’t have it any other way.

We have promo classes, character development and it all changes up on the regular. You don’t know what to expect going in, which if you make it, is how it’s going to be anyway!

I definitely compare Team 3D with the life of going to college. I have no regrets on coming here and am so glad that I did.

But with saying that I wouldn’t have gotten here without the help, support and experiences I have gathered at other wrestling schools which are also professional and top notch places to attend. Such as:

The Monster Factory in NJ

Ring of Honor Dojo in Philadelphia

By personal experience, all have great trainers, and without them, I wouldn’t have been able to progress at all.

I hope I gave a small sneak peak into the Team 3D Academy. If you are interested in the school, you can always schedule a time to come visit and check it out by calling: 407-390-9005. You’ll be glad you did.