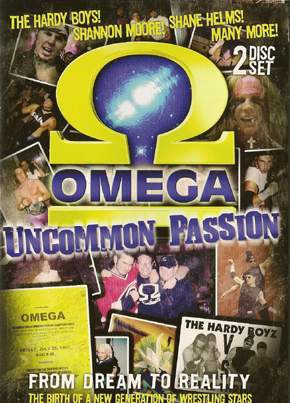 I’ll be honest with you, I actually thought the infamous OMEGA promotion was a glorified backyard wrestling club which featured a bunch of skinny geeks pretending to be wrestlers in a ring set up in the backwoods of North Carolina. Moments after putting this DVD into my player, I realized that I was sadly mistaken. OMEGA was a legitimate wrestling promotion featuring a cast of young passionate wrestlers, many of whom grew up to be big stars the top wrestling federations.

I didn’t make a note of the actual number, but about twelve OMEGA wrestlers would go on to receive contracts with the top three promotions in North America; including Matt Hardy (WWF), Jeff Hardy (WWF), Jason Arhndt (WWF, as Joey Abs), Shannon Moore (WCW/WWE), Shane ‘Gregory’ Helms (WCW/WWE), Christian York (ECW), Joey Matthews (ECW), and Steve Corino (ECW). A couple others had developmental contracts but failed to break through to the big leagues. Throw in a couple of familiar faces like Marty Garner and Lexie Fyfe and you’ve got a pretty impressive roster.

By the way, OMEGA stands for Organization of Modern Extreme Grappling Arts. The name itself is as unique as the style in which it embraces. The promotion is the brainchild of Matt Hardy, and was a forerunner to the TNA X-Division. The high flying, impact-driven style was many years ahead of its time. They also threw in some occasional crazy stunts, like Shane Helms jumping off of a transfer trailer into the ring – with near catastrophic results!

In a world where WWE usually owns the video footage to everything, it was nice to see a documentary where they were able to use actual footage spliced into the interviews to visually demonstrate the stories they were relaying to the viewer. I have to give a major thumbs up to whomever produced the program because it was very well edited and pieced together with perfection.

Matt was the brains behind the operation, but there was a co-promoter by the name of Thomas Simpson, whose insight is also featured prominently on this DVD. Simpson may have been more passionate about OMEGA than most of the wrestlers. This was evident by the tears he shed when talking about the Hardyz scoring their first WWF contracts. I could tell Thomas Simpson was a genuinely great guy, a rare quality for someone of his position in a wrestling company.

The documentary portion of this two disc set includes interviews with all the major players, like Simpson, both Matt and Jeff of the Hardy boys, Garner, Arhndt, Moore, York, Matthews, Corino, and others. The only noticeable absentee was Gregory Helms – who was contracted by the WWE at the time. The interviews were shot over the span of a couple of years, whenever each subject was free and clear of contractual obligations. There was only a small window of opportunity to sit down with Matt Hardy during the summer of 2005 when he was temporarily “released” from the WWE. Matt’s input into the documentary was vital to its development.

The OMEGA promotion had some super impressive gimmicks, and very innovative storylines – all birthed from the mind of future legend, Matt Hardy, who took the reigns and guided his band of misfits into becoming a cult phenomenon. At the time, the OMEGA promotion was wrestling’s best kept secret, as the team did not want to jeopardize the Hardy’s employment with the WWF. As long as they kept it low key, the WWF would allow the Hardyz to do both gigs. When Matt Hardy’s days with the WWE come to an eventual end, I would hope that he puts some of his energy and money into restarting the OMEGA promotion and grooming even more future stars.

The second disc of this set holds a series of matches from OMEGA, including; Venom & Surge (Matt Hardy) vs. Otto Schwanz & Cham Pain, The Hardy Boys vs. The Serial Thrillas (including Shane Helms), Surge (Matt Hardy) vs. Will O’ The Wisp (Jeff Hardy), The Hardy Boyz vs. Serial Thrillas, and Shane Helms & Shannon Moore vs. Christian York & Joey Matthews. There is also a section for memorable promos, including Cham Pain (first name Cham, last name Pain!), The Serial Thrillas (including Shane Helms), and Will O’ The Wisp (if you think Jeff Hardy’s current promos are bizarre you need to check out the Wisp). You could probably file this DVD under “Before they were Stars” but it was obviously so much more than that. You can check out this DVD and others like it at www.bvdvd.com

Are you a fan of WWE superstars Matt & Jeff Hardy? That means you know they have been friends with Gregory “Hurricane” Helms, Mike Howe, Shannon Moore, Joey Matthews (formerly Mercury), Christian York, Cham Pain (Marty Gardner) & Jason Ahrndt for years. What’s that, did you ask who the heck are Mike Howe, Christian York, Cham Pain and Jason Ahrndt? That means you probably didn’t know Matt Hardy created and booked a Carolina’s based promotion called OMEGA. Surprised to read that fact? Then you need to get a copy of the very entertaining OMEGA: Uncommon Passion released by Highspots.com and Big Vision Home Entertainment hosted by OMEGA ring announcer Ted Hobgood.

Matt and Jeff Hardy have been wrestling since their teens like the other men listed above. In 1997 Matt & Jeff got tired of running their own trampoline based wrestling shows and the East Coast Wrestling Federation was born followed by the New Frontier Wrestling Alliance. Matt hooked up with promoter Thomas Simpson eventually creating OMEGA or Organization of Modern Extreme Grappling Arts which was a mix of American, Mexican and Japan. The Hardy’s wrestled as themselves but also characters like High Voltage & Will O’ the Wisp. They grabbed up the best workers along with their friends and began running shows at fairs and local venues. If you attended an event you saw a very young “King of Old School” Steve Corino and the men listed above who would go onto work for WWE, WCW and ECW. Each wrestler listed has a chance to tell their story of OMEGA and where it ended up taking them. The story goes from the birth to the death and the reunion show the fans of OMEGA asked for.

If you have seen the WWE’s Twist of Fate DVD on the Hardy’s career or the BVDVD Ultimate Insiders on the Hardy’s some of this is repeat stuff. But this DVD goes in depth on certain stories you only have read about online. Like the issues between Matt & Ahrndt who became Joey Abs of the Mean Street Posse, how Jeff and Shannon were wrestling before they were old enough to drive themselves to events, how the Hardy’s began working for the WWE plus the successes and failures met on the way to the top. Along with some bonus stories you get a second disc filled with the following matches: Otto Schwanz & Cham Pain vs. Venom & Surge (Ahrndt & Matt Hardy), two matches of the Hardy Boys vs. Serial Thrillaz (Helms & Howe), Surge vs. Will O’ the Wisp and Shane Helms/Shannon Moore (WCW’s Three Count) vs. Christian York/Joey Matthews. Also on the second disc are promos from Cham Pain, the Serial Thrillaz and Will O’ the Wisp.

You can buy this disc in stores or online through www.bvdvd.com or www.highspots.com