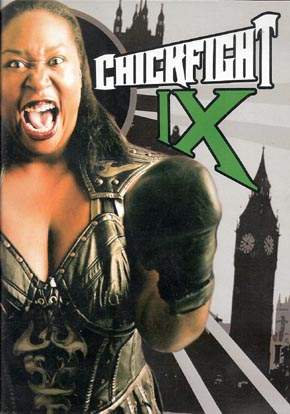 If you’ve been living under a rock, you can check out the first eight ChickFight Tournament DVD’s by clicking here.

10-BELL SALUTE: The night began with the announcement of tragic death of Sensational Sherri Martel, followed by a special 10-bell salute and moment of silence for one of the greatest ladies wrestlers of all-time.

CHICKFIGHT 9 – FIRST ROUND
Jetta vs. Blue Nikita: I believe this would be my first exposure to Germany’s Blue Nikita, and I’ll admit that I expected a more intimating force. Once again I made the mistake of judging a book by its cover, as the petite Nikita proved to be quite the talented little firecracker. I caught a glimpse of the ChickFight 9 DVD cover on my desk and imagined the winner of this match getting eaten alive by Amazing Kong. Was it a prophecy? Nikita became the lucky winner of match number one after an impactful Senton-bomb from the top rope!

CHICKFIGHT 9 – FIRST ROUND
Vicky Skye vs. Bubbles Cartwright: Let’s get ready to rumble; a couple of underdogs ready to bite and claw their way towards a chance at instant stardom. A few moments into the match, the lights went out in the building, but it didn’t effect what was going on in the ring. A few minutes later when the lights came back on, the fans cheered with joy. Bubbles hit a series of Clothelines and followed up with a Running Bulldog, but could not get the pin. Skye showed her aggressive side, with a ferocious assault on the knee of Bubbles. Skye would not let up the pressure, and Bubbles would not give up. Bubbles mounted a comeback but the match as derailed when Cheerleader Melissa hit the ring and destroyed both girls! A couple of guys made the worst mistake of their lives by trying to stop the attack, but the Female Terminator (Melissa) kicked their asses too! Another guy jumped in to talk some sense into Melissa, but he became the victim of a bone-crunching Kudo-driver!

CHICKFIGHT 9 – FIRST ROUND
“Jezebel” Eden Black vs. Jade: Eden Black is a ball of fire, and looks like one with her fiery red hair. She is so small but she makes up for it with an aggressive ring style and supreme intensity. The fans love Jez just as much as I do, and Jade was booed by the dogmatic audience. There was an obvious increased level of existing heat between Jezebel and Jade, as their wrestling match became very hostile at times. Jezebel found a way to pin Jade’s shoulders to the mat and secure a spot in the finals of ChickFight 9 (receiving a bye due to Bubbles vs. Skye ending in a No Contest).

CHICKFIGHT 9 – SECOND ROUND
Amazing Kong vs. Blue Nikita: They didn’t bother to explain WHY Awesome Kong received an automatic buy into the second round but that was the case for ChickFight 9. My prophecy came true, as cute little Blue Nikita was forced into a match where she was to be eaten alive by the monstrous Amazing Kong. Kong took her time, and Nikita managed get some strong offense in. Nikita did a flip dive off the top rope onto Kong on the floor, then followed up with a leap of faith off lighting structure. Wow, this girl is awesome! Nikita cleared the front row, but was knocked out by a vicious back-fist from Kong! Kong pushed Nikita back into the ring and set out to put her out of her misery. Nikita squirmed out of a Power-bomb attempt, and did a back-flip off the top rope. Kong caught the Greek cutie and planted her with a Power-bomb to win the match and advance to the finals of ChickFight 9!

CHICKFIGHT 9 – FINALS
Amazing Kong vs. “Jezebel” Eden Black: It worked out to be somewhat of a level playing field, since both Kong and Black had only wrestled one match each due to receiving byes. When you see these two standing next to each other, you can’t help but think there is no such thing as an even playing field. Jezebel proved her greatness by going head-to-head with Awesome Kong in a convincing slug fest. I expected the match to go on much longer, and highlight Jezebel’s determination to survive. Kong made pancakes out of Jez with a colossal splash off the second rope! Amazing Kong is your ChickFight 9 Champion!

BONUS MATCH (FOR THE RQW WOMEN’S TITLE)
Cheerleader Melissa vs. Wesna Busic: The big time main event of the night featured ChickFight ambassador Cheerleader Melissa continuing her grudge feud with “The Croatian Panther” Wesna Busic. Wesna won ChickFight 8, and was challenged by Cheerleader Melissa immediately following her triumphant victory. Melissa went on to defeat Wesna to steal all of her thunder. ChickFight 9 featured their much anticipated rematch. These two female fighters share so much chemistry that they could wrestle a hundred times and have a different match for each outing. This particular match was fought with Falls Count Anywhere stipulation. Melissa showed the world why she has been dubbed the Female Terminator when she flung Wesna into the first four rows and started throwing chairs, missing an elderly woman by a matter of inches. The carnage continued as Wesna suplexed Wesna off of a couple chairs onto a couple more chairs – inciting a “this is awesome!” chant from the fans. A few minutes later, Melissa set up a table near the ring. Melissa confiscated a video camera and began taking close-ups of her foot pressed firmly against Wesna’s throat! Melissa dragged Wesna to ringside and both women fought over who was taking the table bump. Wesna tried to squeeze Melissa into an equipment box but she wouldn’t quite fit. Fatigue started to set in, as both girls slowed down to recharge their battery. The fight spilled out the emergency exit and the girls brawled on the streets for a few seconds before returning inside the building. Melissa opened a can of Coca-cola and spit it in Wesna’s face. That is just shocking! I pegged Melissa for a Pepsi girl. A few rough minutes later, the table finally came into play, as Melissa “tried” to slam Wesna off the ring apron through it. However, Melissa miscalculated and Wesna’s upper body hit the ring, and her legs bounced off the table (which didn’t break). Ouch! And the match continued for another ten minutes until Melissa tried to pop Wesna’s head off with a Kudo-driver from hell! Seriously, that move never looks good, but this was BAD! Wesna still managed to kick out, but quickly found herself in the grasp of a painful submission hold at the hands of Melissa. Suddenly the bell rang, and the ring announcer declared the match a draw after the 45 minute time limit expired. Wesna retains her RXW Women’s championship……… barely!