History of the Scaffold Match 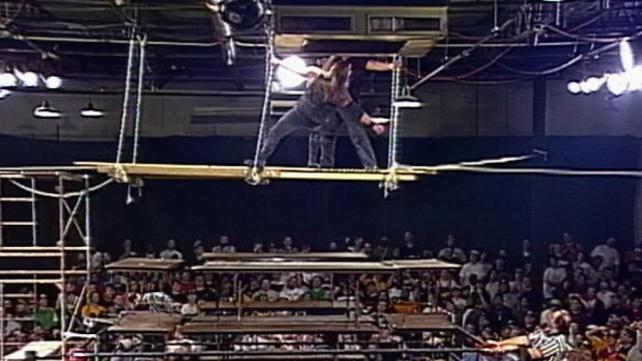 When Mick Foley was infamously thrown off of the top of Hell in a Cell at King of the Ring 1998 by The Undertaker, it wasn’t a stipulation of the match — it was a risk. It takes a special kind of crazy or a very bitter grudge to engage in a contest with the potential to be thrown off a scaffold. WWE Classics examines five of the most memorable — and wildest — Scaffold Matches in sports-entertainment history. (Courtesy of WWE.com)

The Clockwork Orange House of Fun match, known as Raven’s House of Fun, was created by professional wrestler Raven (legitimately, as Raven pitched the idea himself to TNA’s creative team). It is a singles match for which a chain link wall is erected on one side of the ring with chains wrapped from it to various points on the ring itself with weapons hanging from them.  In the first match the only way to win was to put an opponent through two tables after throwing them off “Raven’s perch” (a small scaffold),but afterwards it was changed to falls-count-anywhere rules. [Courtesy of wikipedia.com]

The Crazy 8 match, used mostly in the defunct Pro Wrestling Unplugged promotion, involves placing a championship belt at the top of a scaffold with the first wrestler to retrieve it being declared the winner. Placed in and around the ring for the wrestlers to utilize during the match are one side of a steel cage, two trampolines, and four rope swings. [Courtesy of wikipedia.com]