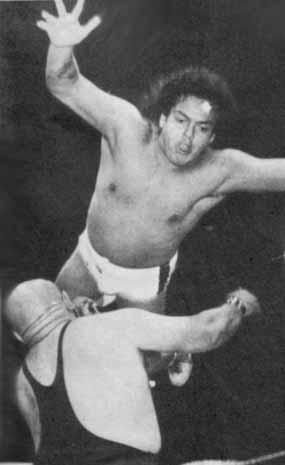 Armando Nunez wrote: Before Hugo Savinovitch became an announcer on W.W.E. , Hugo made his mark in Puerto Rico. He was trained by Johnny Rivera and had a run In the Dominican Republic & in independent promotions in Puerto Rico. He had excellent mike skills and in 1978, started as a heel manager. His first proteges were Kendo Kimura & Hiro Sasaki, and started managing Abdullah the Butcher. He was also known as El Munecaso (the doll), due to his mannerrisms. His masculinity was in question not only for being a coward, but a slight sexual preference( he was called pato, a slang for gay). One time he had hair extensions ( like Bo Derek). During his career, Hugo feuded with Carlos Colon who sometimes Gave Hugo “severe beatings” that left him “broken” legs, arms and neck. Every time he brought Abby to avenge him, causing most of the bloodiest matches during Colon’s career. His protegees won a lot of championships like; the North American single & tag titles,the Caribbean & Puerto Rican belts, & W.W.C. singles & tag team belts . On the mid 80’s after being “injured” by Carlos Colon, he put Barrabas in charge of his wrestlers. Barrabas was a veteran manager (he started managing when the company began) who was relegated to manage mid- card heels, took all Savinovitch’s wrestlers with him in a mayor coup. When Hugo came back from his hiatus, he found out that all his wrestlers (including Abby) left him for Barrabas & began a feud that catapulted Hugo from heel to baby face. Later on, Hugo became the host of Super Estrellas de la Lucha Libre program( after the production company runned by the previous host, Rickin Sanchez, parted ways) & was a good one. During that period Hugo had feuds with Eric Embry & El Profe(the Profresor , a masked Angel Rivera better known as a part of the Peron brothers,with Chicky Starr). Hugo & el Profe had a series of unique matches. Hugo won a match in which the loser gets painted with yellow paint. But Hugo lost a hair vs mask match. The feud of Eric Embry had a special lumberjack match in which fans with whips were surrounding the ring After a long period, Hugo left W.W.C. to work at the A.W.F. as a host until the promotion folded. Hugo coined some phrases that integrated not only in wrestling, but in puertorrican jargon. He Called Abdullah the Butcher “El monstruo, la maquina”(The monster, the machine), “Acangana”, Etc. He found religion and became a christian.This is a list of wrestlers that Savinovitch managed: Kendo Kimura , Hiro Sasaki, Abdullah the butcher, The super Medics(Jose Estrada , Johnny Rodz & Don Kent), The Fabulouis Kangaroos, Mr. Fuji, Toru Tanaka, Mr. Pogo, Mitsu Ishikawa, Haru Sonoda, Tamba, King Tonga,Gorilla Monsoon,Buddy Landell,The Mongolian Stomper , Ox Baker, Bob Sweetan, Dory Funk’Kendo Nagasaki , Terry Funk , The Sheik, Invader #2(not shure) & los Pastores(The Sheepherders: Luke Williams, Butch Miller & Jonnathan Boyd who was billed asa Jonny Miller). If anyone of my paisanos read this & information that I forgot to add ,Please post it on Hugo Savinovitch profile. I’ll really appreciated it.