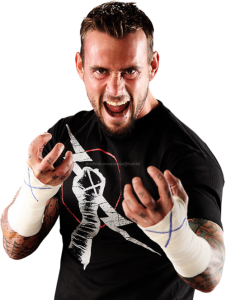 David Dexter reports that CM Punk recently spoke with USA Today about writing the intro to the upcoming hardcover for the Marvel Avengers vs. X-Men crossover event, which will be released on November 9th, plus more….

On relating to Doctor Doom: “He’s a bad guy but he’s justified in his actions. He’s one of those characters that to me can be misunderstood a lot. There’s a lot of parallels between myself and Doctor Doom.”

On getting the opportunity to write the intro: “I worked really hard to get to where I’m at and it’s cool to be afforded opportunities like this. To me, it’s hard work paying off and I’m having a lot of fun right now. There’s good and there’s bad, but if you don’t stop to smell the roses, so to speak, it’s all for naught…If I had to describe my writing style, it’s very sarcastic and self-deprecating. You’ll be able to tell it in the foreword.”

On his love of Marvel’s original G.I. Joe comic book: “There was a huge difference between the cartoon and the comic book. A lot of people don’t know that — they think of G.I. Joe, they think of corny, “Yo Joe!” America stuff. But the comic book was so well written, it blew me away.”

On comic book quotes influencing his promos: “I’m sure there’s been some dialogue in a comic book, something Batman said or something pretty heavy like maybe Doctor Doom said that I’ve used.”

On using Thing’s ‘It’s clobberin’ time!’ catchphrase: “I’ve got to explain it a lot, but the ones who know know.”

On his love for Garth Ennis’ Preacher series: “It completely redefined what comic books were. It was smart, it was funny, it was engaging, the art was amazing. It’s one of those unfortunate instances where I think people look down on comic books almost the same way they look down on pro wrestling — maybe it’s this lesser art form or it’s just for kids and it’s goofy. But I defy anybody to read Preacher and tell me they feel the same way after that. That opened my eyes to a whole different world.”

On Ed Brubaker’s run on Captain America: “I used to loathe the Captain America character, and seven years ago, (Brubaker) completely revitalized that character and he made me fall in love with it.”

On digital comics: “I hear it’s great, but I’m pretty stubborn. I’m the last guy to jump on things like that. I need to feel the comic book, I need to read it, I need to hold it in my hands.”

On considering writing his own comic book: “We’ve kicked around a couple of ideas. You might see something like that in the future. It was nothing I ever really thought about until they approached me. It was very matter-of-factly like, ‘Hey, you should write a comic book.’ It was pretty cool.”

Marvel editor-in-chief Axel Alonso on Punk writing the intro: “Who understands the theatrical nuances of a good smack down more than WWE champ CM Punk, who brings the same muscle and heart he beings to the ring to his brilliant intro for Avengers vs. X-Men.”