By OWW Contributor on February 4, 2015@owwcom 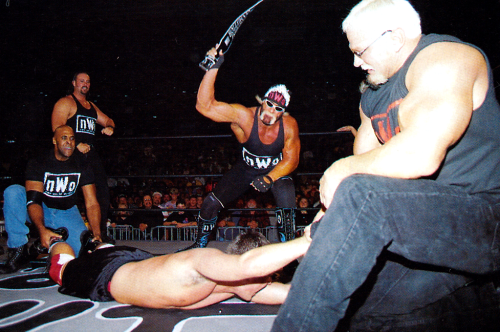 Souled Out 1999 took place on January 17, 1999 from the Charleston Civic Center in Charleston, West Virginia.  In this excerpt from Ric Flair‘s 2004 autobiography, To Be The Man, Flair discusses Hulk Hogan‘s mistreatment of his son, David Flair.  That night Ric Flair and David Flair (with Arn Anderson) defeated Barry Windham and Curt Hennig.  David pinned Hennig after Anderson hit Hennig with a tire iron, but it was Hogan’s behavior after the match that got him all fired up…

Ric Flair on this particular match:

“David and I teamed up against Curt Hennig and Barry Windham. David, obviously, had no idea about how to wrestle, but Barry and Curt — being great guys and great workers, with no agenda other than having a good match — really made David look like a million dollars. Every spot they’d practiced came off like clockwork. We were doing everything we worked out beforehand. Arn Anderson ran in with a tire iron and took it to Hennig, and David shocked the fans by getting the pin.

That’s when Hogan and the nWo hit the ring.

>>>David Flair: It was Hogan, Hennig, and Windham with Buff Bagwell and Scott Norton. They grabbed my dad and handcuffed him to the ropes. Then they held my arms and legs while Hogan whipped me with a belt. He told me he was going to hit me three or four times, and I was like, “Okay.” But he must have hit me fifteen, maybe twenty times. He just whipped the shit out of me. The belt would go around my back and slash me in the stomach. I was black and white.

I’ll never forget how Scott Norton, this big strong guy who used to be an arm-wrestling champion, kind of squeezed my hand as he held my arm down and asked, “Are you okay, kid?” I never expected that from him. but then, I also never expected to get whipped like that. That shit hurts.<<<

I’m not surprised about Norton. He was the toughest one there and had nothing to prove. What no one had told me was that Hogan would try to be cute and whip David over and over again. It wasn’t fair to make my son go through that — he wasn’t even really a wrestler yet — but there was nothing that I could do. I was handcuffed to the ropes. I couldn’t jump up and say, “Hey, don’t do this to my kid.” I wanted to, though. I felt like running over and holding David in my arms, and just stopped that stupid angle right there. He wasn’t ready.

David didn’t say a word. he took it like a man. You had Curt Hennig and Barry Windham, two of the best performers during their primes, and they bounced around for every one of David’s moves. My son couldn’t do anything, and they made him look like a star. And then there was Hogan — with all his experience, and all his celebrity — trying to be cute. He whipped David like a dog. It was sickening, and I’ll never forgive him for it.”