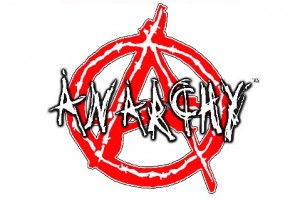 Anarchy Wrestling presented Fright Night 2012 on 10/27/12 at the newly dubbed Anarchy Arena in Cornelia, GA before 175 ravenous fans, who never seemed to tire of the action. They were hot for everything.

This event was important for Anarchy in that it was the first quarterly “Big Show” since they parted ways with their former sanctioning body and the Anarchy crew proved beyond a shadow of a doubt that they didn’t need any help from outside forces, and had all they needed to make an impact right there at home. Fright Night also represented the beginning of a new era in that all 4 major Anarchy championships changed hands.

This opener was anchored by two established Anarchy stars in Henry and Pendleton, but was also important in featuring guys who were climbing the ladder. Najassism & Vandal continue to have good showings as a team with a unique look & style. Joey Rhymer has fan support, Brandon Parker has started to come into his own teaming with AP3,and Gibson & Penerelli are getting plenty of negative reaction from the crowd (cat-calls of Pizzarelli, Hemmoroids, & jobbers showered them),. The combination made for a very entertaining opener with the established hero Anthony Henry taking home an important victory.

2) Billy Buck pinned Bo Newsom to become the new Anarchy TV Championship. The 10 minute time limited expired with match a draw, but Franklin Dove ordered 5 more minutes; This was a fantastic back and forth match and one of many that the fans were emotionally invested in. Billy Buck has been a go to guy for Anarchy. He’s a home grown star, trained right there in the Anarchy arena. He’s beaten all the key players in the past, but just at the wrong time. He’s been in that dangerous scenario where one more chase without winning the big one, and his fans may have just lost faith in him….but this night was not that night. Bo Newsom has had a strong grip on the TV title for quite a while. He’s elevated himself to new heights as the protege of Shaun Tempers. He’s gone from an up and comer to a major player. But at Fright Night 2012, however, Buck wouldn’t be denied…and after getting the 5 additional minutes. Billy only needed about one minute to hit the Superkick and pin Bo for the 1, 2, 3.

3)Seth Delay pinned Bobby Moore so Moore had to wear the Barney outfit while “I Love You” played. Delay knocked Moore/Barney out with nucks postmatch; This was a fantastic match that had a whole lotta pride on the line. If Moore won, Delay had to kiss his feet. If Delay won, Moore had to adorn the Barney suit. Delay snagged the victory and Moore was having none of it. Officials came out and made him put the suit on, where we were treated to a hilarious display of buffoonery as Moore tried to get the suit off, while chasing his tail and tripping over himself in the process.

4)Stryknyn (with Rev. Dan Wilson) submitted Adrian Hawkins to become the new Anarchy Young Lion’s Champion with Todd Sexton as the special referee. Adrian Hawkins, with the new addition of his entourage Tommy Penerelli and CB Suave has become a heatseeker as Anarchy Young Lions Champion. He’s proven that he may be the best submission wrestler in Anarchy and all title defenses have been held under submission rules. “The Lethal Dose” Stryknyn has no problem taking or breaking the rules he needs to suit his favor. Stryk unveiled his new finisher “The Tourniquet” a few weeks ago (his own version of the Anaconda Vice), showing that he’d worked with The Rev to craft an effective weapon against Hawkins. Hawkins gave Stryk his best, and he even tried to have his co-horts get involved, but between Todd Sexton as special ref and The Rev in Stryk’s corner, they’re involvement was limited. It was a great back and forth battle, but once Hawkins found himself locked in the Tourniquet, it was time to tap out, or risk serious injury. The fastest rising, and arguably most popular up and comer in Anarchy, The Lethal Dose Stryknyn has now placed his first flag in the ground towards his conquest of Anarchy Wrestling and is the new Young Lions Champion.

5) Mikael Judas defeated Jacoby Boykins by pinfall, Se7en by DQ and Jeff Bailey’s Surprise Brian Casanova by pinfall to win the Gauntlet From Hell and a match with Jerry Palmer on 11-10-12;

MIkael Judas had faced all these opponents before, but never all at once. It was a clear stratgey designed by The Elite to take out Judas. Unfortunately for them, it was ineffective, at least in the short term. Judas and Boykins battled it out in and even keel, but Judas was able to beat him. Se7en was clearly sent to soften Judas up for the big suprise. Se7en immediately went to work on Judas with a chair and got DQ’d, but clearly injured his knee. The big suprise arrived in the form of the retruning Bryan Casanova, and he continued to do a number on the knee of Judas, but on this night, “The Priest Of Punishment” couldn’t be put down. He withstanded yet a 3rd assault and also beat Casanova to earn his match vs Jerry Palmer.

6)Brodie Chase defeated Shaun Tempers to become the new Anarchy Heavyweight Champion; This moment got a standing ovation from the fans and the locker-room. The match was ordered restarted after a referee dispute. (Chase had Tempers pinned but his foot was on the rope. Referees Brent Wiley & Dee Byers got into a heated confrontation over the decision, which led to Byers shoving Wiley down). The match was restarted and Chase hit his double arm DDT finisher and got a clean pin on Tempers to win the belt. Chase himself looked on in disbelief. The “Mickey Rourke” of Anarchy had finally one the big one. This was truly a heartwarming moment.

7)Urban Assault Squad (Shadow Jackson & Nemesis with Jerry Palmer) defeated Slim J & Azrael (with Dan Wilson) in a Barbed Wire Massacre – Tag Team Title match when Nemesis pinned Slim J after a senton onto J who was on a barb wire covered table to become the new Anarchy Tag Team Champions. This was as brutal and bloody as everyone expected. Things got out of hand in a hurry. The ropes were wrapped with barbed wire. There were weapons wrapped in barbed wire (that included a basketball, a baseball bat, a 2×4, a trash-can, a halloween ghost, and a keyboard). The deathblow came when Shadow and Azrael took a tumble into a barbed wire steel casket from the apron the the floor, leaving Slim J all alone in the ring with Nemesis. Afterwards, Wilson threw himself over the carcass of Azrael to prevent any further attacks. Jerry Palmer taunted him further and Wilson attacked Palmer. Azrael & Slim J’s manager was then the victim of a heinous 3 on 1 attack was hanged by UAS postmatch. The UAS created a barbed wire crown of thorns and noose and were preparing to finish The Rev off for good when Judas and Chase came out for the save. Judas announced that the 11-10 match with Palmer would be in a steel cage. The arena erupted.