Big star to be inducted into the WWE Hall Of Fame 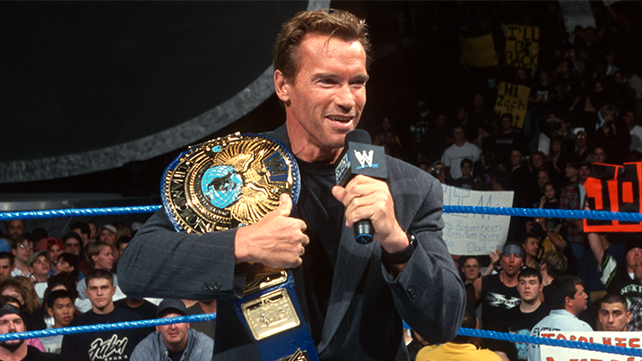 Few individuals in film, politics or athletics are as recognizable across the globe as the one and only Arnold Schwarzenegger, and he mastered all three. And now, as first reported by TMZ, he will be recognized for his contributions to the world of sports-entertainment as the Celebrity Inductee in the WWE Hall of Fame Class of 2015.

The Austrian-born Schwarzenegger became interested in bodybuilding in the early ’60s, and in 1967, at just 20 years old, he became the youngest ever Mr. Universe. The following year, he moved to the United States and soon after that, he became close friends with future WWE Champion “Superstar” Billy Graham. In 1970, the “Austrian Oak” won his first of seven Mr. Olympia titles. After WWE icon Bruno Sammartino judged one competition, the two formed a 40-year-plus friendship that culminated in Arnold inducting Bruno into the WWE Hall of Fame two years ago, inside New York City’s Madison Square Garden.

In the 1980s, Schwarzenegger befriended another future WWE Hall of Famer, Jesse “The Body” Ventura, when the two starred together in both “Predator” and “The Running Man.” Their careers continued to run in parallel as each became United States Governors, Ventura of Minnesota and Schwarzenegger of WrestleMania 31’s home, California.

Arnold’s relationship with WWE continued through the Attitude Era when he appeared on the November 11, 1999 edition of SmackDown. In the ring, WWE Chairman Mr. McMahon presented the action movie icon with a replica WWE Title and named him the “World Box Office Champion.” Later that evening, he helped The Rock, Shane McMahon, Kane & Test defeat the villainous D-Generation X when he slid a steel chair to special enforcer “Stone Cold” Steve Austin, who connected with Triple H. Following the bout, Triple H took a swing at Schwarzenegger, who ducked and terminated The Game with a series of vicious fists.

In 2014, Arnold appeared on Raw for the first time to promote his new film “Sabotage,” alongside co-star Joe Manganiello. While they discussed Andre the Giant with Hulk Hogan, The Miz interrupted the festivities, but was slugged across his Moneymaker by Schwarzenegger and sent flying out of the ring by The Hulkster.

A quintessential immigrant success story, Arnold Schwarzenegger has already achieved the American Dream. And now, “The Governator” will be enshrined into the WWE Hall of Fame the night before WrestleMania 31, in the state that he once so proudly led.