Home / WWE / BleacherReport.com presents: “Why Nothing Beats the Live Experience at a WWE Event” by Chris Mueller

BleacherReport.com presents: “Why Nothing Beats the Live Experience at a WWE Event” by Chris Mueller 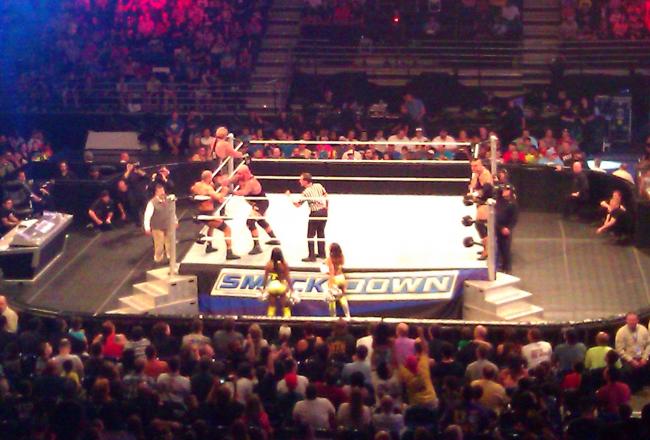 Editor’s note: This article originally appeared on bleacherreport.com and was written by Chris Mueller.

WWE puts on a great product three nights a week on television, but nothing beats seeing the show in person.

I was able to attend the tapings for Main Event and SmackDown this past week, and seeing the show live was far and away a better experience than watching it at home.

Watching the show at home has commentary, slick editing and maybe even a backstage segment or two that are not shown to the live audience, but watching the show with thousands of other screaming fans makes it worth the price of the ticket.

Whether you go to a house show, TV taping or a pay-per-view event, the atmosphere is always very energetic. You can really tell that the people around you truly want to be there.

Every show I have ever gone to, I have found myself having conversations with complete strangers in the stands near me or around the arena.

The people who were seated next to my friend and I had won tickets from a radio station. They won four tickets, but their other two friends bailed on them at the last minute. They were cool with me and my friend moving one seat over so we had an empty seat on either side of us to set our drinks on.

They did not seem like very regular viewers of the product, but by the third match they had really gotten into the show. Seeing a person become a fan of someone like Randy Orton within the span of a few minutes is a really cool experience.

The family in front of me was a Grandfather, a father and two young boys no older than seven and five. The grandpa seemed like he was having a great time, while the boys wanted nothing more than to start their own chant with the crowd.

The people behind me were the kind of fans WWE loves.

They were cheering for all the babyfaces and booing all the heels. It was clearly a family of five who were all there as fans together. The youngest daughter screamed at such a high pitch during Randy Orton’s entrance that I thought my ears would ring for a week.

I saw at least five different girls who had on AJ costumes that were very accurate, dozens of people with replica title belts and hundreds of different wrestling shirts from decades ago to today. I even saw a kid wearing a Big Bossman shirt. You don’t see many of those anymore.

WWE events are not like going to a game where two teams are playing and you are either for or against the home team. Everyone has their different favorites at a WWE event, and you can see someone’s emotions change throughout the night as their favorites win or lose.

Someone who is a big RVD fan could have been let down by his loss to Randy Orton, but Christian’s win over Alberto Del Rio could have brought them right back up.

You get to see little kids attending their first show, hardcore fans with the signs they worked so hard to make and longtime fans who are there just because they are always there. And you get to share this experience with everyone.

The lines for merchandise at one area turned into a huge cluster of people, but nobody pushed each other and everyone seemed to recognize the order people were supposed to go in. It was really impressive how the salespeople handled the crowd.

Before any of the matches took place, Tony Chimel was in the ring with a ref and a small group at ringside started chanting “Tony! Tony!” It put a smile on the ring announcer’s face, and he even talked with a few of the guys before he had to announce the first match.

Speaking of announcers, the pop Lilian Garcia got was huge. The fans really love her, and she was really having a good time with everyone at ringside. People like interacting with these characters, even if it is just for a few seconds.

The commentators get their own entrances before the taping begins, and JBL did a little jig as he came down the ramp to a huge ovation.

The Shield came out through the crowd about 10 feet from where I was sitting, and everyone near me was standing up trying to get a look at the trio during their entrance.

WWE TV does not do the shows justice in terms of the amount of chants that occur. Sometimes it is only a third of the crowd chanting, but there are very few long periods without anyone starting something.

After the show was over, we could hear people throughout our parking garage screaming “Yes!” and singing Fandango’s theme song. The party just kept going, and it was a Tuesday night.

On the way out of the parking garage we saw Ranjin Singh just standing there with someone else from the WWE crew. My friend yelled “Great Khali!” out my open window and Singh yelled “Hell yeah!” back to us.

This was the first time I had ever had the chance to see RVD, Christian or The Shield wrestle live, and none of them failed to deliver exciting performances.

One thing nobody saw on TV was the dark match between The Real Americans and Tons of Funk. Antonio Cesaro really wowed the crowd by holding Sweet T up for a solid five seconds before hitting the gutwrench suplex. It was truly an impressive feat of strength.

The show I attended did not feature any appearances by John Cena or CM Punk, and Dolph Ziggler only appeared in a short segment, but it was still a great 10-match show.

It might sound cheesy, but WWE events give you lots of those little moments to remember. Even the blast of heat from Kane‘s pyro from 30 rows away is something that sticks with you for a long time.

Have you ever been to a WWE event? If so, Did you love it or hate it? Share your experience in the comments section.