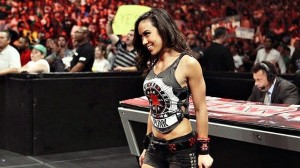 Just as they did with Zach Gowen who was almost too young to be given all that on-screen time and the pressures that come with it(then it all blew up for him/and not in a good way, and they dropped him after similarly milking his character and person to death on each WWE show until fans “Spirit Squad” got bored with it all)… they’re doing not just that but the old Russo-Rip-off yet again.

Anyone who’s aware of admittedly tortured singer Fiona Apple who’s got a new album out after many years(and admitted to lots of psych counseling in the meantime) will remember one of her 1996 music videos where she sang about always being messed up, too emotional, “trouble with a capital T,” and that she’d had it with “fretting over too many boys she went after but who didn’t give her the time of day back.”  In the video, “the bad Apple” ends up pushing one ex who’s atop a ladder(in the vid’s dream sequence) onto several other beaus she’d earlier pined for, and who then all stumble and fall over onto the ground.

Just like this week on RAW is Bore. Apple’s been labeled “the crazy rock chick,” etc. since she got famous.  And back then even sported the 70’s Farrah Fawcett heat-wanded long hair look that AJ now wears.  Hmmm.

Can we not come up with fresh ideas that aren’t rehashed mashups of stuff from real life entertainment, or already crafted TV or movie characters.  Glad Charlie Sheen’s 19th 2nd chance TV show (Anger Management – a rip from the Nicholson/Sandler movie of the same name) got trashed by critics who say he’s “washed up and jumped the shark a long time ago.”(Hollywood Reporter, Variety).  He’ll be just about right to be the lead “celeb” for the 1000th RAW is Cooked.

In another of Apple’s videos, some of the depicted boyfriends “in her dreams” actually spin their fingers around their head(the int’l sign for ‘she’s cuckoo’) just as CM Punk has done once she “leaves the room.”  And in one of her “He Done Me Wrong” songs, Apple also lambasted a guy for not paying as much attention to her as she did to him and guessed he didn’t feel the same way toward her.

This on many levels feels like some of the lazy booking and “creative” we’ve seen in the past with guys like Vinny R.  The milking of SNL’s Mango character as Kiwi and then renamed by legal to Kwee-Wi.  The incorporation of ready-made Howard Stern characters like Beetlejuice used in the Scott Steiner angle in 2000.  And so on.

I don’t think, even with the theft of an established and possibly legit “crazy chick” act like that of the very talented Fiona Apple; it’s ever been done in wrestling, so on other areas, it feels “fresh.”  One can’t fault the Whiff for trying to create their own characters out of developmental, NXT or Tough Enough (none of them went anywhere-although I still say established West Coast talent AJ Kirsch would’ve been ready to go for WWE ala Lo-Ki or Brian Danielson Brian.  It’s a shame some of the actual, long-time real women wrestlers like Nattie or Beth Phoenix aren’t getting that kind of lengthy, weekly air time they really deserve.  Nattie got the few weeks of IBS/fart angle crap and young AJ gets this.  That said, AJ is terrific in the role.