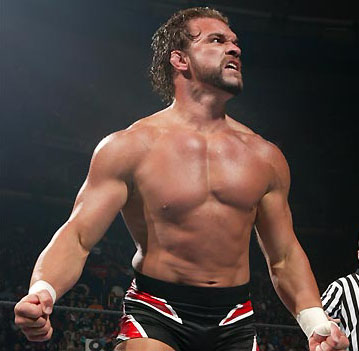 The latest edition of Wrestle Talk Radio — exclusively on www.WildTalkRadio.com — opened up with some light chatter between the show’s hosts, which included a rundown of what was to be expected on the night’s program including an interview with the soon-to-debut Charlie Haas. You can hear the show in it’s entirety at http://www.wildtalkradio.com.

After the first break, owner and founder of WTR, host Tim Stein brought on former 3 time WWE tag champ, and one half of the World’s Greatest Tag Team, charlie Haas. the interview opened with talk about Charlie and wife Jackie Gayda becoming parents for the third time with Jackie delivering a boy — their first son — back in June. It was evident in Charlie’s voice that he was very ecstatic to have welcomed a third member to their family.

At this point, the show’s co-hosts were introduced, first The Spug guy, then Mase, who kicked off the interview asking Charlie about his try-out match with WWF/E in 2000 with his brother Russ. He spoke about being excited and scared, debuting in New York city’s Madison Square Garden and subsequent contract offer the next night in New Jersey at the company’s Smackdown! tapings.

Spug asked the next question involving another former WWE star Rico. Spug asked about how Rico had convinced Charlie to “work” with him in a Smackdown match. Charlie spoke about putting over your opponent or not, which in turn gets yourself over or not. He talked about ring psychology and that match’s importance as Charlie’s first on after the death of his brother. From there they talked about Charlie’s personal experiences in learning ring psychology as opposed to just working in the ring for “pops”. At this point he put over Jim Cornette, Jerry Lawler, Jack Brisco and Arn Anderson, with some interesting insight into a conversation he had with Randy Orton in getting the entire match over with limited moves, but facial expressions and body language. You can her the show in it’s entirety at http://www.wildtalkradio.com.

First tagging with Shelton Benjamin was the next topic of discussion where Charlie talked about how much practice he and Shelton would engage in regularly and how much hard work they put into working together. This branched into working with Kurt Angle and taking advice from him in relation from transitioning from amateur wrestling to pro wrestling.

From there WTR’s “standard questions popped, first with Charlie’s memories of the best ribs he ever saw or was involved with. Charlie brought up when he was working in Memphis Wrestling, and a fellow wrestler while highly intoxicated peed on some towels. For payback he was given some icy-hot and told it was deodorant, and couldn’t understand why his armpits were burning up.

Charlie’s imitation angle was then brought up. charlie informed the listeners that wrestlers were coming up to him asking him to imitate them, most notably Shawn Michaels, who even offered to lend Charlie some of his outfits. Charlie then mentioned that this angle ended due to politics, and promised to into further detail on an upcoming Wrestle Talk Radio program. The next standardized qwuestion dealt with getting into the business or improving in the business, and Charlie’s response may surprise listeners.

His business ventures were then touched on: Custom Muscle, operated in conjunction with JBL along with his brick-and-mortar store, talking about how it’s not about him, its about supporting his family and providing for them.

From there talked turned to his upcoming debut in ROH, teaming once again with his partner Shelton Benjamin — a talk that was briefly interrupted by his daughters — and you could hear in his voice his level of excitement at the upcoming September 11th show (which can be seen at gofightlive.tv.).

The interview wrapped up with Charlie promising to return to the show in the near future to spend as much time on the program as he can and going in depth on many other topics. You can her the show in it’s entirety at http://www.wildtalkradio.com.

The program closed off as it always does with “Quick Hits”. You can hear the show in it’s entirety at http://www.wildtalkradio.com. Wild Talk Radio is the home to not only Wrestle Talk Radio, but also Online World of Wrestling’s OWW Radio with Alan Wojcik and includes shows Otaku Talk Live, CB Radio and Anything Goes among others.