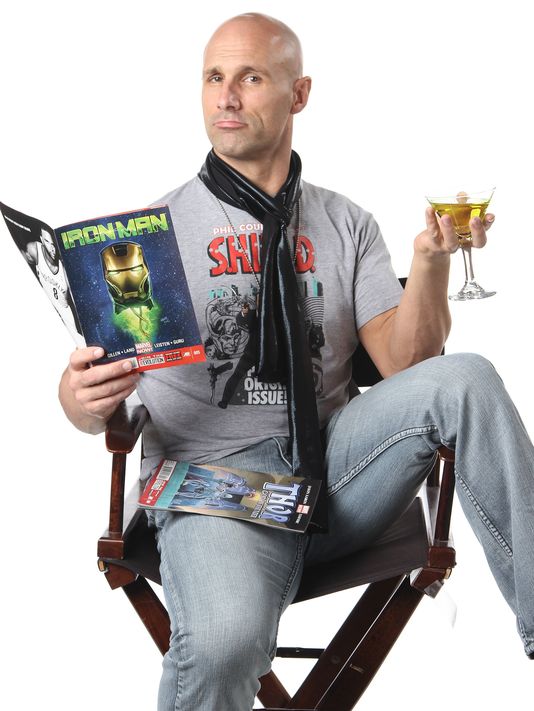 The ‘TNA Impact Wrestling’ star is a supervillain of the squared circle.

To be the best supervillain he can be in the wrestling ring, Christopher Daniels doesn’t have to go much farther than his own comic-book collection for his “bad” influences.

A fixture on Spike TV’s TNA Impact Wrestling every Thursday nights (8 ET/PT), Daniels is one-half of the brash tag team Bad Influence with Frankie Kazarian but also a devoted Marvel Comics fanboy who’s not opposed to wearing a Fantastic Four shirt in the ring every so often.

It’s clobberin’ time for Daniels this Sunday night (8 ET/5 PT) at the Lockdown pay-per-view event in San Antonio when he and Kazarian try to regain the world tag-team championship in a three-way match against title holders Bobby Roode and Austin Aries and the duo of Chavo Guerrero and Hernandez.

“It’s a big deal, man,” Daniels says. “They’re two of the best teams in the world and we’ve got our work cut out for us.”

It’s been an exciting time for Daniels professionally in recent weeks. After nearly a decade of taping shows at Universal Studios in Orlando, Impact is heading on the road beginning this coming week in Chicago and doing TV events all around the country.

Plus, he’s having fun with his current character while teaming with his longtime friend of 15 years, Kazarian, and while getting booed mercilessly by crowds, they’ve also become one of the most entertaining parts of the Impact show just by being themselves, according to Daniels.

“The things we’re doing on television now, that’s the way Frankie and I are backstage — we’re very snarky guys. Our sense of humor is a little bit cutting – it’ll get you at the kneecaps,” Daniels explains about their status as “heels” (wrestling parlance for the bad guys).

“We took that ball and ran with it. And they’ve been very happy and supportive in terms of getting us out there and letting us have opportunities on the microphone and doing the silly stuff that has sort of become our trademark — that satire has become our staple. They’re basically throwing underhand pitches to us at this point.”

To wit, the Impact creative team set aside interview time for them while filming in England to come out wearing kilts and Braveheart-esque war paint on their faces, “which wasn’t greeted too fondly, as you can imagine,” Daniels says.

“A lot of our stuff comes out of, ‘Wouldn’t it be funny if…?’ or ‘Do we have the guts to do this on television?’ — just him and I brainstorming and trying to think of ways we can get under the fans’ skin and ways we can get people to talk about this the next day around the water cooler.”

Growing up in North Carolina, Daniels, 42, was a fan of wrestlers like Ric Flair, Dusty Rhodes, the Road Warriors and others in Mid-Atlantic Championship Wrestling (which later became NWA and then WCW), but after college he moved to Chicago to become an actor. He had some children’s theater gigs but found it was hard to break into the scene, and Daniels would joke to his wife, “If this acting thing doesn’t work out, I’ll be a pro wrestler” — “not knowing the scope of that statement,” he says now.

His wife found a wrestling school 30 minutes from them, and Daniels was working matches within three months. But instead of being like the muscular icons he watched as a kid, he found role models in smaller, athletic guys like WWE star Shawn Michaels, who was one of the kings of the ring in the 1990s.

“I was never going to become Road Warrior Animal,” Daniels says of the massive, mohawked tag-team performer of old. “With imitation being the sincerest form of flattery, I went out there and wanted to be Shawn Michaels 2.

Yet before his interest in acting and wrestling, Daniels originally wanted to be a professional comic-book artist, and while his employment goals changed, the love for the medium never stopped.

He also discovered a correlation between comics and wrestling: Daniel and his colleagues have individual powers, be it brute strength, amazing agility or high-flying acrobatics, and both mediums tell stories of good and evil — one in the ring, the other on the page — “with colorful costumes and witty banter back and forth,” he says. “That’s basically comic books on the live stage.”

In the last couple of years, one thing Daniels has taken from comics and used in his job is the idea of the villain as someone who in their heart believes they’re doing the right thing — such as the X-Men baddie Magneto — and it’s the good guys who have it all wrong.

“It was so much better to be evil for a reason rather than just for the sake of being a bad guy — that Snidely Whiplash, twirling-the-mustache (character), that’s very one-dimensional to me,” Daniels explains. “I want to justify what I’m doing and believe it, and to me that’s way more interesting than just, ‘Ha ha! I’m just going to mess with the good guy because he’s the good guy and I wear a black hat.’ That doesn’t have a whole lot of leg.

He adds that the characters Daniels and Kazarian have now are “the ones who think the television show should revolve around us, we should be the main eventers, we should be champions, we should have our faces on the posters and T shirts, they should change the show to CD and Kaz — that’s our mentality, so that has carried the day for us the last year and a half.”

There are a lot of video-game geeks in the Impact locker room, Daniels says, but he’s the biggest comic nerd of them all. “If you asked around, they would all point to me.”

He does often suggest titles for other guys to read and gives them code for digital copies, but many wrestlers such as Daniels, Impact’s Samoa Joe and WWE’s CM Punk are already big fans and are very vocal about their comic adoration.

A lot of that is generational — in the past 20 to 30 years, many comic books have a more literary feel and are for more intelligent readership than past decades where they were mainly for kids, according to Daniels.

“Depending on who you read, these guys are way ahead of the curve in terms of the depth that they put into the stories they tell,” says Daniels, who lists Brian Michael Bendis, Jonathan Hickman and Jason Aaron as some of his favorite writers.

“It’s not something you can read and put away. It’s not popcorn, it’s not low-calorie bubble-gum stuff – this stuff is dense, man. It’s heavy lifting. But it’s great. If you can get into it and take that time to absorb everything you’re reading, that stuff to me is entertaining.”

Daniels does appreciate DC Comics characters now and then, but he’s most been impressed lately with Marvel’s “Marvel NOW!” initiative and especially Bendis’ All-New X-Men, which brought back the original X-Men through time-travel means, and Dan Slott’s Superior Spider-Man, featuring a Peter Parker with the mind of arch-enemy Doctor Octopus.

“These concepts have taken these characters that we’ve known for 50 years and turned them 180 degrees on their side and gone a completely different direction. They’re such game-changers,” says Daniels, who is doing a signing at Chicago’s Challengers Comics shop with Kazarian on Wednesday.

Similarly, it’s in his best interest to freshen up Christopher Daniels every so often — he’s wrestled under a mask as Curry Man and Suicide, and often utilizes a popular “Fallen Angel” persona.

“So much of our business is ‘What have you done lately?’ There is no resting on the laurels,” Daniels says. “There are times when you’ll be up in the spotlight at the very top of the show, and you get put back down in the mix because the company is trying to keep everybody fresh and interested, and one guy can’t be stuck at the top of the card forever.

“There’s a constant struggle to make yourself stand out form the crowd, and Frankie and I have done a really good job with that just being who we are.”

While some supervillains strive to rule the globe, Daniels just wants to rule his own universe — as a world champion.

It’s the one thing that’s eluded him in his career, he says.

“I’ve been doing this for 20 years now and I feel like I’m closer now to being a world champion for our company then ever. It’s just a matter of opportunity now, and being ready when that opportunity comes around.”