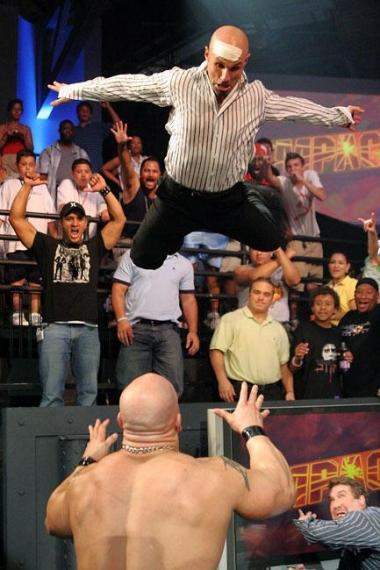 “The Fallen Angel” Christopher Daniels Discusses His TNA Departure (And How He Feels The Company Could Have Potentially Utilized his Character More Effectively/Done With Him Differently), Ring Of Honor’s Forthcoming Death Before Dishonor VIII iPPV (And His “Pick 6” Contenders Series Match Against Kenny Omega), The Differences Between The ROH & TNA Products, Low Ki’s WWE Debut As Kaval In Season II Of NXT, & CM Punk Taking The Opportunities Given To Him By The WWE (And His Recent Run Leading The Straight Edge Society On SmackDown)

“The Fallen Angel” joined The Big Mosh, Jimmy Noonan, & “The Chairman of the Board” Todd Vincent for his first interview since leaving TNA/his return to “Your Home of Wrestling Radio” (to preview Ring of Honor’s forthcoming “Death Before Dishonor VIII” iPPV in Toronto, Ontario, Canada), which is now available in Windows Streaming Media or via Monday Night Mayhem’s official Podcast on iTunes:

The transition from TNA to Ring of Honor over the past several months & if he ever felt he would see himself in ROH full-time once again: “I always thought Ring of Honor was a great place to wrestle, especially if you enjoy wrestling like I do. It’s usually the place where the top talent in the world goes to wrestle, so I’m thrilled to be back there again with guys like Jim Cornette & Adam Pearce heading the ship. You look at the roster they have, and just to be included in that roster, it’s really for a lack of better term an honor. The guys that are going to be on this Pay-Per-View (Death Before Dishonor VIII) are some of the best wrestlers in the world. I always hoped that I would be wrestling and holding my own with the best in the world, so yeah I’m happy to be there.”
The lowdown behind his TNA departure & if he anything publicly to say to those within the TNA organization: “I don’t really want to discuss what happened between me & TNA; that’s in the past, and I’m just gonna go wrestle where I can wrestle. I’m happy to work for a company that appreciates me being there, and right now that’s Ring of Honor, Triple A, & other companies around the world. I’m just concentrating on staying busy and trying to stay at that competitive level.”

What he feels TNA could have done differently with him creatively & how the company could have utilized his persona & character more effectively: It’s easy to look back in hindsight and say ‘They should have done this,’ or ‘I wish they could’ve done that.’ Every wrestler in the world has probably looked at whatever company they’ve been in and said ‘I could’ve been pushed better,’ but the truth of the matter is, creative teams, whether TNA, ROH, or even WWE, there’s a bigger picture that they deal with. The decisions that are made, while they may not be as beneficial to me as a single, in the end they are trying to make the whole roster move forward and be better. What could they have done different? They could have put the World Title on me, but they didn’t. They decided to do what they did, and that’s something we all have to deal with.”

What the fans can expect in his “Pick 6” Contenders Series Match vs. Kenny Omega at Death Before Dishonor VIII in Toronto: I lot of people are happy that I’m back in Ring of Honor in the sense that get a chance to see me live. Coming back after three years of being in Ring of Honor, I get the opportunity to have matches that I haven’t had before, and one for example is Kenny Omega. Kenny has done a lot of good stuff on the independents, both in Ring of Honor & PWG, as well as going overseas. There is a lot of buzz around Kenny Omega, and so, there’s a lot of anticipation for the first time ever that he & I will ever wrestle each other.

How different the ROH product is from TNA right now: “The similarities are of course that the rosters are made up with guys that are hungry for bigger & better opportunities. Being with ROH from the beginning, along with mostly being TNA from the beginning and watching both companies grow from where they were in 2002 to now. Both companies have always been that ‘little engine that could,’ and the differences are in the opportunities that come to both companies. TNA has had better opportunities & breaks in terms of their television situation, but at the same, ROH has had a little more freedom internationally and dealing with talents around the world & with other companies. TNA has tried to be its own entity. It all goes back to the talent and the talent that is hungry for trying to become bigger & better and try to make whatever company we’re talking about more successful.”

More is contained in this worldwide exclusive with “The Fallen Angel”, including his candid thoughts on who he looks forward to competing with in his return to the Ring of Honor roster, how he’s still learning (both in & out of the ring) after many years in the business, how he prides himself in being in the best shape of his life right now, his current relationship with Low Ki/his comments on the highly anticipated debut of “Kaval” in Season II of WWE NXT, plus Daniels’ thoughts on CM Punk taking the opportunities given to him by the WWE (along with his most recent run with The Straight Edge Society). Say your prayers Mayhem Nation, as Christopher Daniels breaks his silence in his first post-TNA interview…found only on “Your Home of Wrestling Radio.” Log on to http://www.ROHWrestling.com & http://www.Tickets.com to purchase your tickets to Ring of Honor’s return to the Buffalo, NY area (at the Erie County Fairgrounds Agri-Center) next Friday night, June 18th, along with ROH’s “Death Before Dishonor VIII” iPPV in Toronto, Ontario, Canada (at The Ted Reeve Arena) next Saturday evening, June 19th. Unable to be a part of DBD VIII in person? Purchase the event right now on http://www.GoFightLive.tv for only $14.95!

Check out the official Monday Night Mayhem Audio Vault, along with the official MNM Podcast on iTunes, and listen to select programming & audio content from the past five+ years of The Mayhem. You can re-live interviews with some of the finest warriors from Ring of Honor (ROH World Champion Tyler Black, “The Fallen Angel” Christopher Daniels, Davey Richards, ROH World Tag Team Champions Chris Hero/Claudio Castangoli, Jerry Lynn, Austin Aries, & Kenny King), plus some of the biggest names in the worlds of sports, entertainment, & Hollywood (Ice-T & Coco, Dennis Rodman, Jim Kelly, Curtis Granderson, Theo Fleury, Nancy O’Dell, Michael Buffer, & the stars of Vh-1’s “Basketball Wives”). Hear these interviews & many more right now by logging onto http://www.MondayNightMayhem.com, and don’t miss all-new episodes of “Your Home of Wrestling Radio” every Monday evening live at 7PM ET/6PM CT along the airwaves of the Monday Night Mayhem Radio Network!