Contribute to “The Rich History of World Championship Wrestling” documentary 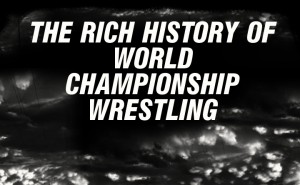 THE RICH HISTORY OF WCW DOCUMENTARY

Hello to all the wrestling fans around the world. It is with great pleasure that I tell you about a documentary I wish to produce. “The Rich History of World Championship Wrestling”

Let me start by saying that out of all the great wrestling promotions over the years, my personal favorite has always been WCW. I always felt WCW was geared to more sport then entertainment. 1989 was the perfect example of that, as some of the greatest matches in wrestling history took place that year, most notably was the Ric Flair vs Ricky Steamboat classic battles, along with the intense Ric Flair vs Terry Funk classic matches.

The documentary will feature a brief history of Jim Crockett Promotions, and lead to the eventual sale to Ted Turner in 1988. The year 1988-2001 will be the focal point, and trust me, there is an enormous amount of ground to cover. From Turner’s acquisition, the nWo, the politics, the triumphs, the eventual demise of WCW and everything in between, I will put together a fascinating timeline of events for the talent to discuss.

As producer of this documentary, I take great pride in putting out a product I know fans would want to see. I would not attach my name to something if I didn’t feel I can do it properly. I strive for perfection when I put my mind into something creative, and I have great confidence that this documentary will be the greatest retrospective look at WCW ever produced. Since this is a independent production, the talent interviewed for this are free to speak their mind and be as detailed as they want, without fear or censorship.

I have been a fan of pro wrestling since 1984, and consider myself to be a very knowledgeable student of the game, especially as it pertains to WCW, so rest assured as producer of this documentary I will put everything I have into making it as great as I can.

I have always been a fan of documentary film making, and have produced and edited projects for friends and family, so to say I am excited about putting together a doc on my favorite promotion, and sharing it with the world, is quite an understatement.

To contribute to the documentary, visit this site:

*PLEASE NOTE- NO WWE OWNED VIDEO, IMAGES, LOGOS, OR ANYTHING ELSE OWNED OR COPYRIGHTED BY WORLD WRESTLING ENTERTAINMENT WILL BE USED TO MAKE THIS DOCUMENTARY.

THIS IS AN INDEPENDENTLY PRODUCED DOCUMENTARTY THAT WILL BE TOLD THROUGH VERY DETAILED INTERVIEWS WITH FORMER WCW TALENT AND JOURNALISTS WITH GREAT KNOWLEDGE OF THE COMPANY AND HAS NO AFFILIATION WITH WWE.

IF IMAGES ARE USED IN THIS DOCUMENTARY, THEY WILL COME BY SOURCES NOT OWNED BY WORLD WRESTLING ENTERTAINMENT*