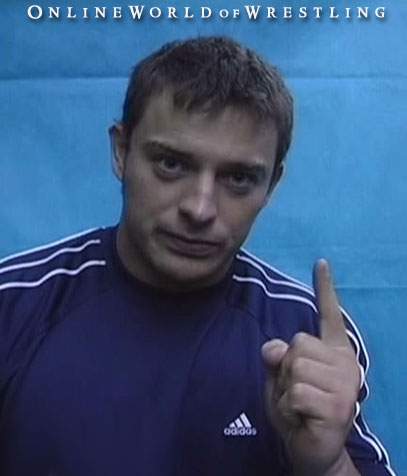 Davey Richards Previews ROH’s Returns To Detroit/Toronto And Discusses His Situation On Parting Ways With Evolve/Re-signing With Ring Of Honor, The Transformation Of “The American Dragon” Bryan Danielson Into Daniel Bryan (And His Work On WWE NXT), & The Rumors Of Charlie Haas Heading To ROH

Former two-time Ring Of Honor Champion, Davey Richards, was one of the special guests on this week’s live edition (03/15/09) of Monday Night Mayhem (presented by ReelWrestling.com), hosted by The Big Mosh & “The Chairman Of The Board” Todd Vincent. You can feel The Mayhem live & in streaming audio every Monday night (at 7PM ET/6PM CT), exclusively on The Monday Night Mayhem Radio Network (www.MondayNightMayhem.com).

The current PWG World Champion joined The Big Mosh & “The Chairman Of The Board” Todd Vincent for an exclusive interview (to preview Ring Of Honor’s return to the Detroit & Toronto areas, along with ROH’s debut in the Phoenix market for WrestleMania weekend), which is now available in Windows Streaming Media or via Monday Night Mayhem’s official Podcast on ITunes:

Interview highlights courtesy of The Mayhem’s official correspondent, Paterson From New Jersey:
What it is like for him to be part of Ring Of Honor with so much going on in the company: “It’s home, and that’s the best way I could put it. Ring Of Honor is the perfect fit for me & my style, and I’m part of the best tag team, and I get to work with what I think is the best locker room full of guys. Going to Charlotte (for “The Big Bang” Pay-Per-View)…I actually lived in Charlotte for a little while, so that’ll be great to return there. WrestleMania weekend is always a big weekend for us. I had a match being part of last WrestleMania weekend, so I’m hoping to continue that streak. I’m just looking forward to everything, and it’s going to be an honor to be there.”

His goals in the company going forward into the spring/summer: “As far as my immediate goals, just putting on the best matches I can & staying healthy. One of my biggest goals of The American Wolves was really not for me at all. It was to help someone who I thought was underrated (Eddie Edwards) and give him some spotlight. I think people are just realizing now how good he is, so that was one of the top goals of forming The American Wolves, and I feel like we’ve done that. At this point I’m part of a machine, and the machine is Ring of Honor, and I just wanna have the best matches I can and show people that hard work pays off.”

His thoughts on the company’s flagship television program, Ring Of Honor On HDNet, and what advice would he give to a new fan of the promotion: “The best I can answer this is I’ve always considered Ring Of Honor as a place that doesn’t have to hype itself & explain itself, because it really is what you see is what you get. No one can touch our in-ring wrestling, and if people just give us the opportunity to sit back & watch, we’re not gonna try to throw 500 characters & 500 punch lines at them. We are the best wrestling company, and we just want people to sit & enjoy what they came to see which is just professional wrestling. So the best way I can answer that is at Ring Of Honor, the wrestling speaks for itself.”

The rumors of Charlie Haas potentially signing with Ring Of Honor: “I’m always down to work new talent and test myself. I think Charlie would be accepted. Ring Of Honor is a place where there isn’t a negative connotation coming in. If you can hang & you could go, then that’s the bottom line. Charlie was an amateur wrestler, Charlie’s an athlete; he’s not a bodybuilder, Charlie’s a wrestler, so I think Ring Of Honor would be a great place for him. I would love to see him in there, and I think he could swim, but the final decision is up to him: whether he’s gonna put in the time to shift into fifth gear & go the extra mile — that’s what it takes to be in Ring Of Honor, but I definitely thinks he has it in him.”

The transformation of former ROH World Champion, “The American Dragon” Bryan Danielson into Daniel Bryan & his work so far on WWE NXT: “I actually have never seen the program. I haven’t watched wrestling on television is quite sometime, so I haven’t really seen it. But I don’t have to see the program; we’re talking about Bryan Danielson. He was the one who wanted me to start calling myself ‘the best in the world,’ but I know my place, and I know I’m nowhere as good Bryan. And if anyone in the world can get themselves over & get to that next level, it’s Bryan. That’s really a no-brainer. He could be king of the wrestling world tomorrow and it would not surprise me one bit, so I think he will be fine.”
More is contained in this exclusive interview with Davey Richards, including the reasons why he chose to part ways with EVOLVE & re-sign with Ring Of Honor, if a rematch could be in the plans with his American Wolves partner (Eddie Edwards) for the ROH World Television Championship, his thoughts on the pool of talented performers & future stars within ROH, how it feels to be going back to Canada this weekend for the promotion’s return north of the border in Mississauga, & why he foresees 2010 as being his final year in the business. For more details on Ring Of Honor’s forthcoming events in the Detroit & Toronto areas, what’s ROH has in store for the wrestling world as part of WrestleMania weekend, & the complete lowdown on “The Big Bang” IPPV in Charlotte (including ticket information on all events), log onto http://www.ROHWrestling.com. Check out Davey’s official website & MySpace page (located respectively at http://www.D-Richards.net & http://www.MySpace.com/Davey015).

“Your Home Of Wrestling Radio” is officially presented by ReelWrestling.com (http://www.ReelWrestling.com), where your favorite Superstars & Divas are just one click away! The award-winning Monday Night Mayhem (voted on by you, the fans as the “Show Of The Year” in the 2009 & 2010 Wrestling Radio Awards) is also sponsored by: Sizzlin’ Sauces (the official hot sauce of The Mayhem: http://www.SizzlinSauces.com), & TicketRelief.com (the official online traffic school of The Mayhem: http://www.TicketRelief.com), & B. Brown Video (where you can relive the moments & memories of professional wrestling’s rare & vintage moments: http://www.BBrownVideo.com)

All new & old members of The Mayhem Nation can check out the official Monday Night Mayhem Audio Vault, which contains the finest programming/audio content from over five+ years of Mayhem goodness. You can re-live interviews with some of your favorite Ring Of Honor wrestlers (ROH World Champion Tyler Black, Austin Aries, Jerry Lynn, & Claudio Castangoli), plus some of the biggest names in the worlds of sports, entertainment, & Hollywood (Ice-T, Nancy O’Dell, Michael Buffer, Brooke Hogan, Bob Zmuda, Dennis Rodman, Jim Kelly, Marv Levy, Curtis Granderson, Theo Fleury, & many more). All this is now available World Wide & 365 at http://www.MondayNightMayhem.com.