Divas in trouble with management? 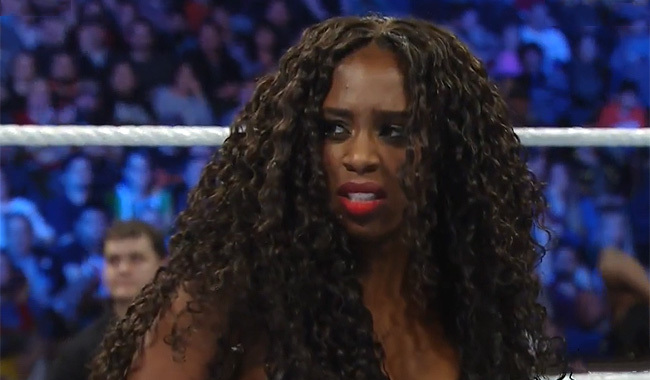 WWE’s Divas Revolution may have hit its first major speed bump. This week’s Smackdown devoted a large chunk of its running time to women’s wrestling, starting with a Charlotte vs. Naomi singles match that got Teddy Longed into a Charlotte and Becky Lynch vs. Naomi and Sasha Banks tag match. Altogether, the ladies were given more than 20 straight minutes of TV time (nearly half an hour if you count commercials) and word is they would have got even more time if it weren’t for an unfortunate, unplanned finish.

After a long, mostly good match, Charlotte and Naomi went into a strange-looking, sloppy sequence of roll-ups, which, surprisingly, ended in Naomi pinning the heavily-pushed Charlotte. After the pin, Charlotte looked shocked, and the winner Naomi, who should have been happy, looked bewildered and upset. Well, according to Dave Meltzer on a recent episode of Wrestling Observer Radio, the match was supposed to go an entire extra segment. It’s unknown at the time who was supposed to win the match, but Naomi rolling up Charlotte out of nowhere definitely wasn’t the planned finish.

It’s difficult to say where exactly things went wrong. There’s speculation somebody, possibly Becky Lynch, was supposed to run in to break up the pin, but never did. Personally, I think the roll-up sequence was just so wonky Naomi may have legit pinned Charlotte down. Check out the finish below, and judge for yourselves…

Whatever the issue was, there’s said to be a lot of heat on the participants in the mach due to the botched finish. Tellingly, WWE didn’t do what they would usually do with a messed-up Smackdown match, and re-tape the finish. Instead, they put the embarrassing scenario on TV.

Let’s cross our fingers and hope this situation isn’t used as justification to cut short WWE’s new focus on women’s wrestling. Everybody has bad matches, and honestly, this match wasn’t even bad. Up until the weird finish, I thought the women did a good job of carrying their 20-minutes of TV time. Hopefully this won’t be the last time they get that opportunity.