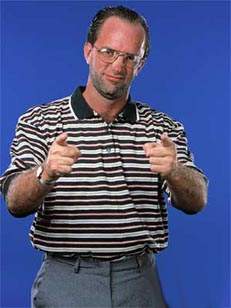 This week, ClubWWI.com is heading Downtown for a shoot interview unlike any other. As a current member of World Wrestling Entertainment, nearly 20 of his 30 years has been spent with WWE. Now, Downtown Bruno Lauer a.k.a. Harvey Wippleman speaks about it all.

His career has seen more moments and unique characters than most. From Well Dunn to Kwang to The Gilberts, Harvey has managed them all. It doesn’t end there, though. Bruno talks about all those and more in his 46 minute ClubWWI.com shoot including: Personal Disdain For Rhonda “Bertha Faye” Singh, Why “Big Bully” Busick Didn’t Work Out, Feuding With Vince McMahon During The McMemphis Angle, When He Knew Giant Gonzalez Was Doomed, When Gonzalez Knocked Him Out, The Rib Vince Pulled on Howard Finkle At MSG, His Book “Wrestling With The Truth,” The Only Time He Ever Said “No” To Vince, Why He Thinks He Won The Women’s Title From Stacy Carter, The Gilberts, Well Dunn, Adam Bomb, Scott Bowden, How Vince is a Victim of his Own Success, and Much More.

Bruno’s book, “Wrestling With The Truth,” is available online at Crowbarpress.com.

One subject that Lauer speaks about is the birth, of sorts, of Harvey Wippleman. That wasn’t the first name WWE gave him. In fact, they never gave him that name. It was actually started due to an error from a famous announcer. Bruno explains this to James Guttman:

“When I first went up there, they didn’t have a name for me. When I had my initial tryout in Wooster, Massachusetts…They called me Henry Herman. Henry Herman was my name at the tryouts. Gene Okerlund said, ‘We’d like to introduce you now to Henry Herman.’ Kind of like a Pee Wee Herman deal. I had the britches that came up. Like the flood.”

Bruno goes into more detail on his outfit and the person his name was based on. He continues:

This is definitely a shoot that any fan of insider stories has to hear. Lauer holds nothing back and no subject is off limits on ClubWWI.com from Memphis to Big Bully Busick to Harvina to tuxedo matches with The Fink, Harvey tells all.