Dr. Tom Prichard speaks out in his first post-WWE interview 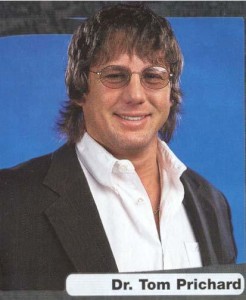 DR. TOM PRICHARD SPEAKS OUT ABOUT HIS FCW DEPARTURE IN HIS FIRST POST-WWE INTERVIEW
By: WorldWrestlingInsanity.com

He was one of World Wrestling Insanity’s first columnists in 2005 and the first ever audio show host on ClubWWI.com. Now, after five years with WWE, Dr. Tom Prichard has returned to ClubWWI.com for a 61 minute “Tuesdays With Tom” reunion with James Guttman – his first audio interview since leaving WWE’s developmental company, Florida Championship Wrestling.

This interview, just like the past editions features nothing but straight talk from Doctor Tom. Among the many topics in the discussion are: a definitive answer to “Will you join TNA?”, whether having his brother Bruce Prichard in TNA helps or hurts him, something WWE does for their developmental stars that no one talks about, a crazy story about throwing up in a restaurant with Michael Hayes and The Hardy Boys, whether Tom had heat for comments he made on World Wrestling Insanity upon returning to WWE, Joe Hennig’s name change to Michael McGillicutty, Having FCW Talent review Raw, the shocking review one guy gave it, how Twitter has affected wrestling, hating The Bodydonna Gimmick, WWF filming his Bodydonna Haircut, the former WWF Champion who just happened to be leaving the salon when they showed up, Raw 1000, Bobby Roode, Austin Aries, and tons more. For a full list of topics, you can head to: http://www.worldwrestlinginsanity.com/am2/publish/newsnotes/ClubWWI_Tuesday_With_Tom_Prichard_Reunion.shtml

James Guttman welcomes Tom Prichard back to ClubWWI.com after long last. He asks him, before anything else, to let the fans know what he’s doing now. What’s going on in the world of Dr. Tom Prichard?

“You know, I’ve been doing a little bit of writing. I have a website out, Dr.TomPrichard.com. I obviously wrote this curriculum. I don’t like calling it a book, but it’s a book.”

Aside from all his upcoming camps and appearances, Tom has created something unique to this business – a one year curriculum for wrestling training. As someone who was so recently with WWE as a longtime trainer and someone with a gift for writing (aside from his Insanity columns, Prichard also wrote the forward for Guttman’s second book), Dr. Tom is offering something that both students and trainers have never seen before.

“Well, first of all, I want to stress that this isn’t and wasn’t written necessarily as a learning curriculum as much as it was meant to be a teaching curriculum. In other words, you would have a coach or a trainer there with this curriculum in front of them to explain the moves more so than having everything written out step-by-step. There are suggestions in there. There are lists. There’re ideas for potential independent wrestlers, people who want to know more about the business, and things of that nature. But it’s not necessarily going to teach you everything step-for-step, move-for-move. So anyone who gets it and says, ‘Well, you’re not telling me how to do a 3D or some of the moves in the later months’, which are pretty advanced, they’re not explained step-for-step. That’s why I wrote in the introduction that Google is your friend…This isn’t for everyone. This business isn’t for everyone.”

The entire thing was written when Prichard was still with Florida Championship Wrestling, WWE’s Developmental. So, even for non-wrestlers, the curriculum serves as a really fascinating look into the minds of trainers and trainees for today’s wrestling product. It’s available on Tom’s website and is a must-have for any wrestling collector. Although the discussion covers everything from his brother Bruce in TNA to his role in the WCCW vs. USWA feud, the million dollar question is about Tom’s release from WWE. Having been a part of training every major star on TV for years, Prichard was instrumental in molding future talent. James asks Prichard about his time with WWE, his eventual release, and how he feels about it all. He tells ClubWWI.com members:

“Here’s the thing. I had a great time there. I have nothing negative to say about FCW, WWE, Triple H, or anyone at that organization. I made a great living. I was there a long time. I had a great time and things change. People want to go in different directions. I understand that. It’s the nature of the business. I wish everybody nothing but – and this is going to sound like such horsecrap, but I really do. I wish everybody there succeeds. I want everybody there to succeed. How stupid would I be to say, ‘Oh! I hated it. I hated it! It was horrible!’? Because it wasn’t. It was really cool. It was a really cool thing. There were really long days. But that was my passion. That is my passion. I don’t mind long days. I don’t mind getting there in the morning and leaving late at night. I just feel it was one of those things where you have a new administration. They want a team that they can count on, that they believe in, that they trust, and that they want. That’s the way I interrupt it and that’s the way it is, I guess – in my mind. I have nothing negative or horrible to say about anybody there because everyone in FCW from the top to the bottom busted their asses every day. Man. It was a great place to work. It’s still a great place to work. I can’t say enough about everyone.”

Guttman’s mentioned in past ClubWWI.com audios how in a business known for diminishing jobs available to wrestlers, trainers have even less. The amount of available positions for trainers is so small that it speaks volumes when you get a position like Tom had for as long as he did. Prichard agrees.

“I cannot have any animosity towards anybody or anything that happened in my time with FCW or WWE at all. You’re right. There are very few spots. Once you’re in that spot, you understand what it is. Believe me, I completely understood where I was at. I completely understood what my spot was. Sometimes you have to take calculated risks. I thought I had taken some calculated risks. Come to find out, (laughs) that I calculated wrong. But hey. Who doesn’t? WWE is the leader in the industry. If you’re going to be the leader, you have to have people you believe are going to lead you where you want your company to go. That what happened and I’m cool with that. It’s a great company, man, and they have some great people in it. I’m talking about in the office, the talent side of things, and the administrative side of things. They do what they do and they do it well, James. I have to say, because I have been on that side of it. I’ve been in the office and I’ve been down here (in FCW) for five years. I had a great run. I really did.”

Dr. Tom Prichard’s full 61 minute return to ClubWWI.com includes many topics in as available along with all the “Tuesdays With Tom” archives dating back to 2005.  Along with over 300 top wrestling stars in uncut interviews, staff audios, and exclusive superstar hosted shows the moment you sign up.  Be sure to follow Tom on Twitter @DrTomPrichard and World Wrestling Insanity @ClubWWI.