Home / Podcasts / Edge interview on Between The Ropes

Edge interview on Between The Ropes 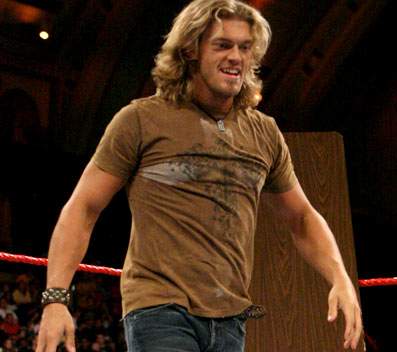 Between The Ropes
Tuesday, September 30, 2008
ESPN Florida AM 1080 and AM 1060
Simulcast online at BetweenTheRopes.com

WWE Superstar Edge was interviewed on Between The Ropes this past Tuesday to discuss Smackdown’s move to MyNetwork TV, his recent hiatus from WWE, working with Vickie Guerrero, and more.

Edge has enjoyed his recent time away from the ring, saying, “I needed to just kind of get a break and step back from the pace and the hundred-and-twenty-mile hour kind of lifestyle. Just chill for a little bit … For once, time off without surgery, without a sling or a neck collar or anything like that. So it’s been really, really nice.” Edge said he asked for the break and feels such rest periods are beneficial to both his passion for the business and novelty as a character.

The Rated R Superstar’s heel performances throughout the year have been tremendously received by fans and journalists nationwide. Edge spoke about the psychotic character he portrayed prior to his SummerSlam Hell in the Cell Match against The Undertaker. “Initially it wasn’t going to be that route. (The night of the Mick Foley Cutting Edge segment) I just felt it and kind of went the psychotic route as opposed to the backpedaling guy who’s afraid to get into this thing. I wanted people actually maybe doubting that I could pull this thing out. And I thought that the only way to do that was to go full-board the other way.”

The on-air romance and storyline chemistry between Edge and Smackdown General Manager Vickie Guerrero remained the highlight of the blue brand for many viewers during much of 2008. Edge admits he was initially reluctant to work with Vickie in such an intimate-based angle, but ended up enjoying his role as the GM’s love interest. “It was fun to take it all over the place, mostly because people thought, ‘There’s no way. There’s no way … huh – it’s working.’ So it’s cool to take on that kind of challenge and – not necessarily throw it in people’s face – but just say, ‘Ah, I knew we could do this.'”

Edge shared his thoughts on working a prolonged program with The Undertaker, beginning at WrestleMania XXIV and culminating with their Hell in a Cell showdown in August. “It was awesome. He’s a legend and a future Hall of Famer – it’s cliché, but it’s completely true … I always wanted to be able to work a program with him and it just never happened, whether I was on Raw and he was on SmackDown or I wasn’t at that level. Whatever it was, it took ten years of me being in the company to really have it be something that people would want to see. And the way it worked out, we had this year and a half thing that just worked.”

Edge commented on the transition from entering WWE as a company rookie to his current status as a veteran in the locker room. “It’s pretty strange. For a while I was still one of the kids and I’m thirty years old and still being called a kid … But now, it’s been such a transition through the locker room and I look around and there’s maybe four of us who have been there since I’ve been there … it’s interesting, and when you have – Ryder and Hawkins, I called them my ‘kids’ – and to see how excited they are and to come up and ask me for advice and everything, and it’s really fun to kind of give back in that respect.” Edge credits Bret Hart, Dory Funk, Tom Prichard, and others for providing him with valuable advice during the early years of his career.

To hear this interview in its entirety – including further discussion with Edge on the topics above, his January 2006 TLC Match against Ric Flair, what he feels are the keys to becoming a successful heel in today’s wrestling environment, the possibility of Christian Cage returning to WWE, and much more – visit the show online at http://www.BetweenTheRopes.com, where you can also become a site member and access hundreds of previous BTR broadcasts and interviews. Join Brian Fritz, Vito DeNucci, and Dickerman for Between The Ropes every Tuesday night from 6:00-8:00 PM ET on ESPN Florida AM 1080 and AM 1060 or worldwide on BetweenTheRopes.com.