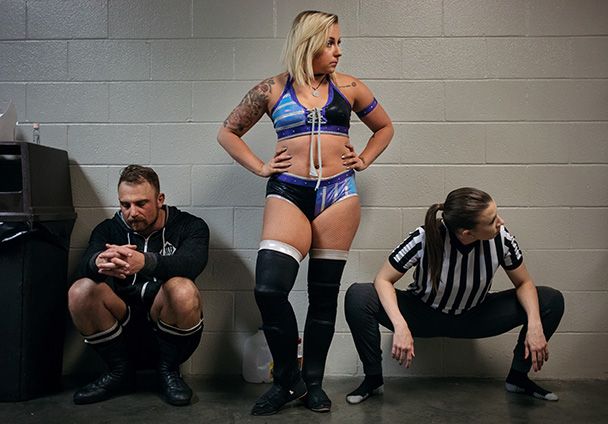 In the middle of the night, at a quarter ’til 2, the audience fends off exhaustion and cold. The main ballroom in the Pontchartrain Center is cavernous, and as the thermostat dips into the low 60s, the men and women (mostly men) and children (two of them) lean forward, waiting for the show to go on. The venue is set up to house 2,500 people, but just 300 tickets have been sold. In the end, only about 170 fans have shown, so the faction that’s here feels sparse, the event a little clandestine.There’s a bald man sitting ringside in a black shirt with bold white letters that blare: “POLITICALLY INCORRECT … AND DAMN PROUD OF IT!!!” A group of seven friends who look to be in their mid-20s sit clustered together eight rows up in the bleachers, a sea of vacant blue seats in front of them. The room is mostly dark, save for the ring in the center illuminated by spotlight. There are no windows to the outside world here, and even if there were, the vista beyond, to Kenner, Louisiana, wouldn’t offer much. An expanse of green fields. A smattering of shade trees in the distance. Downtown New Orleans is nearly 15 miles away, but with those fields and those trees blanketed in a velvety night, the city feels farther. This might as well be the ends of the earth.

Inside, as 2 a.m. draws near, the music picks up, a rhythmic pounding that crescendos in sync with strobing lights. It’s a neon pink and green and yellow rave-like affair, and it’s through a colorful cloud of smoke that Kimber Lee, royalty in the independent wrestling circuit, emerges. She’s here in a homecoming of sorts — returning to the indies after more than a year away in the WWE ranks — to face “Hot Sauce” Tracy Williams at Lit Up. The show, hosted by Beyond Wrestling, is the promotion’s first card featuring just men versus women, intergender matches from the opening bout until the final bell.

Kimber Lee runs the perimeter of the guardrails, reaching out to fans pushed up against the metal gates. She leaps over the turnbuckle and raises her arms, her sequined jacket and purple-and-black, bedazzled bikini set glinting in the spotlight. “Welcome back” chants break out. And when she squares off with Williams — a svelte 192-pound man in miniscule black trunks — the fans are unmistakably in her corner. For five minutes, they grapple and slam each other onto the canvas and trade kicks and expel grunts. Then Kimber Lee climbs to the top rope, launches herself through the air and slams her feet into the chest of a staggering Williams, sending him flying upon impact. Williams retaliates, picking up Kimber Lee and flinging her over his shoulder before spiking her to the ground. “Death Valley Driver!” the announcer hollers.