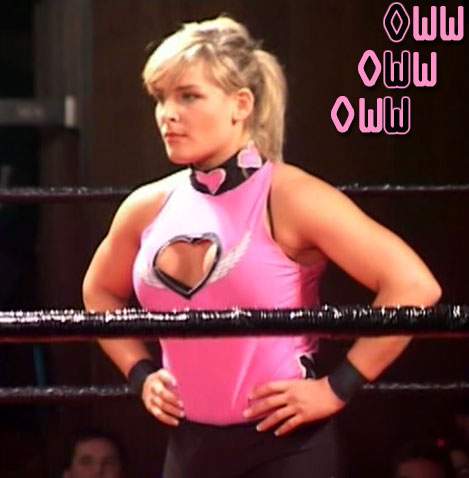 Please credit Alan J. Wojcik of http://alanwojcik.com if used, thanks.

Chamberlain controlled the match by outpowering Madison until Madison snuck in a punch on a supposed clean break. All that did was make Chamberlain mad and he forced Madison to the floor. Madison came back in and tried to make peace with Chamberlain but tried to sneak a cheap kick to the gut in, only to have his leg caught and his whole body press slammed to the mat. Madison slid to the floor and when Chamberlain got close to the floor, Madison tripped him up and slid back into the ring so he could lay the boots in. Madison took over with some cheap shots that opened up Chamberlain’s right eye. Madison tried to keep Chamberlain on the mat with a chinlock but Chamberlain fought to his feet and hit a series of moves that led to a powerslam for the victory.

In the opening minutes Taylor and Osborne had a mat wrestling exchange that didn’t yield any offense. So Anthony tagged himself in and was able to take advantage of Osborne until a well placed knee allowed Gray to tag in. But he walked right into a drop toe hold and his team took control until Anthony got too close to the wrong side of town and spent several minutes fighting for his life. Thanks to Osborne missing a top rope move Anthony tagged out to Taylor who came in to end the match quick. The end came when Anthony avoided a moonsault, carried Gray on his shoulders and drove him into the top turnbuckle. Taylor won after he hit a top rope splash. After the match Osborne and Gray had a heated verbal exchange but it didn’t escalate to anything physical.

After a salt ceremony in the corner, Afa attacked Wilson as he was taking his jacket off. Afa kept on the attack with a head butt and some body shots which kept Wilson off balance. Anytime Wilson tried to get on the offensive, Afa raked the eyes or hit a shot to the throat. Afa even used his wrist tape to try and choke the breath out of Wilson. Wilson went to the ropes but came off into a kneelift which allowed Afa to lock in a nerve hold to Wilson’s shoulder. Wilson fought to his feet but came off the ropes into a Rock Bottom backbreaker that got two. Wilson got to his feet and hit the ropes but his sunset flip was blocked by Afa who went back to the eyes and got two after a shot to the head. Afa sent Wilson to the ropes but this time Wilson hung on and kicked Afa in the chest before hitting a German suplex which sent both men to the mat trying to recover. Wilson was the first to his feet and on the offense hitting a slingshot elbow drop that got two. Wilson and Afa went for their finishers but Afa picked up Wilson, dropping him on the ring apron. When Wilson went for a slingshot sunset flip, Afa grabbed the ropes and held on as he dropped to his knees to get the pin.

Hager and Hart shook hands but Hager pie faced Hart to the mat. Hart went to lock up but Hager used his power to toss Hart clear across the ring. Hager began to showboat and Hart slapped him in the face. Hager bailed to the floor to clear the cobwebs and came back in not knowing what to expect from Hart. What he got was a lockup with Hart that saw Hart flip his body over and take Hager down into a cross armbreaker. But Hager made it to the ropes and caused a break. Hager and Hart traded slaps, waistlocks and hammerlocks but Hart got a side headlock into the armbreaker. Hager went to the ropes but Hart refused to back off, hitting Hager with several kicks to the mid section. Hart backed Hager to a corner but his move only got him dropped on the top rope throat first. Hager got his senses back and went to work on the damaged throat. Hager went for a suplex but Hart countered out into another arm breaker. But Hager raked the eyes and sent Hart to the mat writhing in pain. Hart ended up writhing in pain again after a tilt-a-whirl gutbuster but Hager couldn’t finish him off. Even with a choke hold and raking Hart’s face across the top rope. Hager went back to the tilt-a-whirl move but Hart countered out into the armbreaker but Hager got to the ropes once more. Hart hit an inverted atomic drop followed by a tornado DDT but got two. Hart went up top and hit Open Hart Surgery but somehow Hager kicked out of the pin. Showing frustration Hart went up again but Hager got his knees up causing Hart’s mouth to bleed. Hager quickly got the pin fall win. But it was when Afa Jr. joined Hager in the ring with a chair things got ugly. Afa wedged Hart’s head into the chair and went up top but TJ Wilson came out to stop that.

The lovely Bella Twins (Nicole and Bri) made their way to the ring with a bag. They talked about the new FCW website that included photos of all of the FCW superstars and Divas along with upcoming FCW events. They opened the bag to toss out free FCW and WWE items to the fans.

(5) In a super heavyweight match, Rycklon defeated “the Mastodon of Mayhem” G-Rilla via countout.

If you were expecting a top rope move battle, you picked the wrong match because this was all about power moves. Both went for side headlocks and armbars as they talked trash. G-Rilla hit a shot to the throat to free himself but Rycklon went right back to the headlock only to be leveled by a clothesline. But as G-Rilla insulted the fans Rycklon to his feet and was ready to fight. They decided to have a test of strength but G-Rilla hit a boot to the gut before they could finish the lockup. Both men went to the ropes and the mid-ring collision sent G-Rilla to a corner but not off his feet. Rycklon used a closed fist to back G-Rilla to a corner where he a clothesline but his German suplex was blocked as G-Rilla sent Rycklon forward into the corner. G-Rilla fell back and used a school boy to get the win but ringside attendees said they saw G-Rilla use the tights. So the referee restarted the match but G-Rilla rolled to the floor where he had a verbal confrontation with a member of the FCW security. G-Rilla refused to re-enter the ring and was counted out awarding the win to Rycklon.

FCW Diva Victoria Crawford was the referee for this match that was Lacey’s debut. It got started by Neidhart telling Von Erich she was the only 3rd generation Diva and then slapped her in the face. Von Erich went to fight back but Neidhart locked her in a double chicken wing hold. Von Erich got out and also escaped a headlock by hitting Neidhart with a forearm to the jaw. Von Erich got Neidhart down with a drop toe hold into a front facelock but Neidhart countered out into a hair pull which sent Von Erich’s head to the mat hard. Von Erich was sent to the corner chest first where Victoria ordered a clean break but Neidhart refused. She went for the Sharpshooter but Von Erich countered out into the Claw but let the hold go. Both ladies got into a punching and hair pulling stance before Neidhart went for a stretch submission. Von Erich fought out and hit a corner monkey flip. But Neidhart was able to lock in the Sharpshooter and get the submission victory. The match ended and the Bella Twins came out to aid Von Erich who had trouble walking to the locker room.

“Handsome” Heath Miller made his way to the ring for some interview time. Miller said he had some stuff to get off his chest, namely making sure the fans he knew who he was and how ticked off he was that Ted DiBiase Jr. got his title shot at Harry Smith. Miller actually accused DiBiase’s dad, “the Million Dollar Man” Ted DiBiase, of paying off the FCW Commissioner to get his son the title shot.

Both men tried to get control of the match using chain wrestling holds but it was Smith who hit a belly to belly suplex into an armlock. DiBiase made it to the ropes and got somewhat a clean break until tempers began to rise. Smith got a waistlock but DiBiase got out with an elbow to the jaw and a clothesline to the corner. Smith recovered and hit a standing suplex that got two. Smith went for a rope move but DiBiase held on and when Smith charged, DiBiase hit a drop toehold that sent Smith to the ropes throat first. DiBiase pushed the rulebook to the side and used his boot to choke Smith down. DiBiase slowed things down with a rear chinlock but Smith fought out and got a sunset flip pin for two. But DiBiase got to his feet first and kicked Smith in the face. Both men traded forearms but DiBiase dropped Smith on the ropes again for a choke before hitting a dropkick for two. DiBiase took Smith back to the mat with the chinlock but Smith fought to his feet again. This time DiBiase hit a slam and the fist drop made famous by his dad. DiBiase went up top but Smith caught him and dropped DiBiase on the buckle. Smith went up after DiBiase and hit a superplex but couldn’t get the pin as both men were trying to get their heads cleared. Smith hit DiBiase with a series of moves including two clotheslines and an enziguri. But it was a Perfectplex for two that nearly ended the match in Smith’s favor. Smith went to the ropes but DiBiase hit a powerslam for two. DiBiase slid out of the running powerslam into the Million Dollar Dream but Smith backed him to the corner. Smith went for the win with the Sharpshooter but the match was ended when Afa Jr. threw salt into Smith’s eyes. He was joined by G-Rilla, Jake Hager and Shawn Osborne. But Ted Hart and TJ Wilson came out to aid their fellow member of the Hart Foundation members.

After things settled down G-Rilla decided to make Saturday’s match against the New Generation Hart Foundation a no DQ, no holds barred bout. Smith spoke for his team and said the challenge was accepted.

On Saturday October 13th FCW will be returning to the Jewish Community Center, 9841 Scenic Dr of Port Richey, FL. This will be a fundraiser for the Shady Hill Raiders of the Pasco PAL (Police Athletic League). Tickets are $7 in advance and $10 at the door. Doors open at 7 PM and Bell time is 8 PM. Former WWE Intercontinental champion and current Raw Superstar Santino Marella will be performing along with the FCW Superstars! Plus an 8 man tag team match, featuring the New Generation Hart Foundation vs. Jake Hager, Afa Jr., G-Rilla and a 4th partner to be announced.