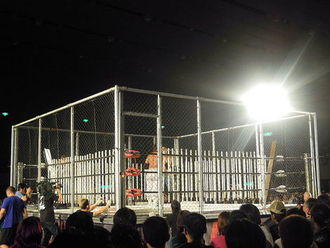 TNA Lockdown just took place, the one TNA event each year where every match takes place in a steel cage. While the event has a couple of matches that might be amazing, here are five cage matches from the history of the WWE, WCW and NWA that rank as the best of all time.

This match was the culmination of one of the hottest feuds in all of professional wrestling, as Larry Zbyszko had been billed as Bruno Sammartino’s prize pupil for many years until frustration led him to the point that he laid out Sammartino with a chair. Zbyszko immediately became the biggest heel in the world and that led to this, the biggest cage match of all time at this period in wrestling history.

This match is not as good as their Wrestlemania match, which Owen Hart won. It is dragged down slightly by the escape only to win stipulation, which sucks. However, these two put on a clinic and when Bret won while Owen dangled from the cage upside down, it was brilliant. These two always put on great matches and this one was no different.

This isn’t the best steel cage match as far as technically sound matches go but the result of the match makes it great. Ric Flair was in Texas defending his NWA Championship against Kerry Von Erich and Von Erich friend Michael Hayes was the referee. At this time, The Freebirds were good guys. Hayes tried to cheat to allow Kerry to win the championship but Kerry refused to take the win. Hayes took it personally, smashed the door into Von Erich’s face and the Freebirds-Von Erich feud began.

There have been many “I Quit” matches in wrestling but none have ever been as great as when Tully Blanchard and Magnum TA fought in 1985. Blanchard was one of the Horsemen and Magnum was supposed to be WCW’s answer to Hulk Hogan.  Unfortunately, Magnum wrecked his car and his career ended. That is too bad because if this match is any indication, he could have been huge. The ending was also perfect, the best I Quit ending in wrestling history.

Author Shawn S. Lealos has been a professional wrestling fan since the rock and roll days of the 80s. Shawn watched all the promotions, but held an affinity for the more rugged ones in the Mid South and Dallas focused World Class regions. He still watches wrestling today, enjoying the WWE, TNA and ROH, watching all three on television weekly.

Check out the original story here!