Adventures in Larryland, by Larry Zbyszko 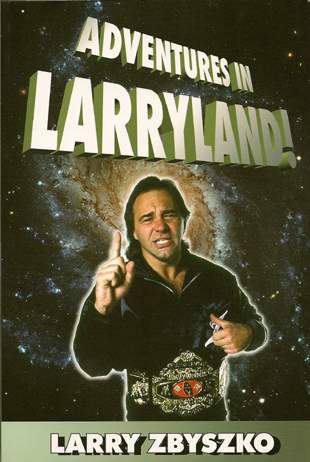 It was a very successful attempt to make the fans hate him, when Larry Zbyszko dubbed himself “The Living Legend” early in his career, stealing the moniker from his famous mentor, Bruno Sammartino.  Sammartino earned the nickname after becoming the most popular wrestler in the Northeast and helping Vince McMahon Sr. build the most successful territory in the world.  Zbyszko may not have been worthy of the title at the time, but he has managed to grow into it nicely over time.  Today, the handle “Living Legend” fits Zbyszko like an expensive custom-made shoe.  Although nobody could match up to Sammartino’s legendary status, Zbyszko did his absolute best to continue the tradition and represent that much-needed reminder that the “old school” mentality is still alive and a worthy of today’s product.

“Adventures in Larryland,” is the fascinating story of Larry Zbyszko’s life as a professional wrestler.  The journey begins with Zbyszko becoming the protégé of Bruno Sammartino, and eventually breaking out of Bruno’s enormous shadow and engaging in one of the WWWF’s most lucrative feuds of all-time.  From there, Zbyszko hit many other territories, most notably the NWA and AWA, before settling into an announcing position with World Championship Wrestling in the 90s.

I think everyone will enjoy this book, but I do have one itty bitty complaint; when I first heard that the “Living Legend” Larry Zbyszko was going to put out a book about his life as a professional wrestler, my initial thought was; “Wow! that is going to be an epic story – 400 pages AT LEAST!”  When my copy of “Adventures in Larryland” arrived in my mailbox I was shocked to find that I had 191 pages of light reading on my hands.  It’s a shame when the people who actually have the illustrious history to fill a HUGE book give the fans 50% of themselves in print.  Meanwhile, bums like Chyna, Goldberg, and Batista, and people with far less experience put out boring 300-400 page books before their career is even finished.  Thankfully, that would be my one and only complaint about this book.  Larry Zbyszko’s book hits on most of the important topics, but barely skims, and sometimes ignores, some of the pressing issues as well.  I’m begging you Larry (and ECW Press), give us Adventures in Larryland 2!

Adventures in Larryland was released by ECW Press for $19.95 (US).  Orders can be placed through their website at www.ecwpress.com

His career spanned the 70’s, 80’s 90’s and he was last seen in TNA Wrestling getting his head shaved by Raven after losing a match. He wrestled in front of over 40,000 people in Shea Stadium and over 70,000 in the Tokyo Dome. He labeled himself “Wrestling’s Living Legend” in 1980 a scant six years in the business. Today he possibly deserves that title as Larry Zbyszko and ECW Press send Adventures In Larryland! (ECW Press, 192pp, $19.95 US) out into the world for all to enjoy.

With it being a short read, Zbyszko skips over the normal childhood background and delves right into how he became the protégé of then WWWF star Bruno Sammartino. That encounter got him into the world of wrestling that today’s fans will never see; the world of territorial promotions like the AWA, NWA, Championship Wrestling from Florida and Stampede Wrestling who ran their businesses like a mob family. He got a crash course in the old boys’ network and the world of Vince McMahon Sr. long before “Junior” took the reigns. What would seal Zbyszko in the annals of history as backstabber takes up five chapters that are well worth reading. With Sammartino in retirement doing TV work, they launched the feud that may never be matched in pure hatred from fans. Zbyszko takes you through the inner workings of the feud and who in the WWWF wanted it to fail.

After the feud ended and the WWWF was taken over by “Junior,” Zbyszko made stops in the AWA and Japan, before working for the now defunct World Championship Wrestling in the early 1990’s. He joined Arn Anderson in becoming “the Enforcers” and earning another nickname “the Cruncher” after the duo broke Barry Windham’s hand in a car door. You will get a backstage look at the many people who ran the promotion from Jim Herd, Kip Frye, Bill Watts and eventually Eric Bischoff who all had their good and bad traits.

There is some talk of the New World Order and “the Monday Night War” but let’s wrap by saying the book is a great read but ends too short as Zbyszko briefly mentions on the last page getting a call from TNA. Could be the “Living Legend” has another book in store for us.

Adventures in Larryland! will be available in stores, online and through the publisher www.ecwpress.com