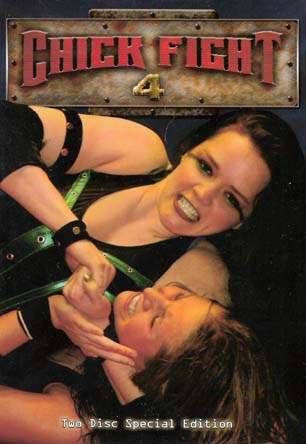 That’s right wrestling fans, women’s professional wrestling still exists in this crazy world of sports entertainment — and it’s more accessible than you might think. The California-based All Pro Wrestling is one of the more respectable independent wrestling promotions in the United States, and has gone above and beyond their duty to present unique women’s competition for your viewing pleasure. Case in point…..

The ChickFight concept is enough to excite any wrestling fan; a tournament featuring eight of the toughest female wrestlers in the United States, and often accompanied by a bit of international flavor.

The first round matches got started with “The Latin Sensation” Mercedes Martinez steam-rolling past poor Carla Jade. I’d heard a lot about Carla Jade and was happy to finally get to see her in a match. She is young, and so far inexperienced, but certainly looks like she has potential. The next match was a bit more of a level playing field as hometown girl Cheerleader Melissa battled the Minnesota Home-wrecker Rain. Rain was in full heel mode, stalling and cowering for the first five minutes of the match, until Melissa finally caught her. Melissa squeaked by in the end to advance to the next round. Next on the line-up was the ultra-intimidating MsChif tormenting the innocent “Canadian Goddess” Candice LeRae. LaRae is just as green as Carla Jade but managed to score a little offense on her opponent despite the tough loss. One thing is for sure, Candice will be experiencing some terrifying nightmares for a long time after this match. The fourth and final bout in the opening round featured the other Minnesota Home-wrecker, Lacey, taking the fight to Hailey Hatred. Hatred came up short in her quest to advance, giving the second round slot to Lacey. Advancing to the 2nd Round: Mercedes Martinez, Cheerleader Melissa, MsChif, and the Lovely Lacey.

Round number two kicked off with the best match of the Tournament pitting “The Future Legend” Cheerleader Melissa against “The Latin Sensation” Mercedez Martinez. Awesome match with both girls showcasing their talents during the contest, but east coast topped west coast on this occasion as Martinez bested Melissa to advance to the Finals. Next was the frightful MsChif taking on an old IWA: Mid South nemesis in Lacey. This was another fantastic match featuring two very confident performers. MsChif came out on top, pinning Lacey and solidifying her spot in the ChickFight Finals.

The night came down to two dangerous fighters challenging each other for the ChickFight crown. As if the match were not powerful enough, Cheerleader Melissa (an apparent sore loser) hit the ring and igniting an intense three-way brawl all over the arena, including each woman being thrown mercilessly into rows of unforgiving steel chairs. Security tried desperately to extract Melissa so that the match could continue, and eventually did so, but not before “APW brass” member Jason Deadrich got smashed with a rogue elbow from Melissa during the chaos. When the dust settled, MsChif managed to score the pinfall over Mercedes Martinez to finally claim to the prestigious ChickFight 4 Trophy!

Does the phrase “worth the price of purchase” mean anything to you? Well if you saw the Bonus Match included with this DVD, you would know the true meaning. Just one night after ChickFight was staged, MsChif and Mercedes Martinez locked up once more, but this time Cheerleader Melissa was an official participant in the match. You can watch this shocking three-way falls count anywhere match in its entirety and you will be left with your jaw hanging wide open when you see the things these brutal beauties of the squared circle do to each other.

Final Thoughts: It should be noted that the production quality of this DVD is off the charts. Whoever did the editing should get an award. I was totally impressed with the quality of the start-up screen as well as the pre-match introductions of all eight participants. My official rating for this DVD is 8/10.