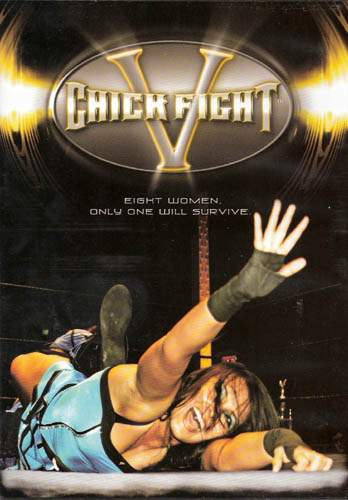 I want start this review by saying the one thing that sets an independent wrestling promotion apart from everyone else is their production style and graphics creativity. A lot of great independent organizations put out some really cool DVD’s but they all seem to follow the same generic production rules. Both of the ChickFight DVD’s that I’ve watched featured jaw-dropping audio and visual effects far superior to anything I’ve seen in wrestling outside of WWE and TNA. The special effects used are integrated to perfection during this show without taking away from the in-ring abilities of any of the girls. So for production value this DVD gets a perfect score of ten out of ten.

The tournament began with a first round match with San Francisco’s own Cheerleader Melissa taking on a blonde-haired Japanese wrestler named Tanny Mouse. Melissa is the only woman to participate in all five ChickFight Tournaments – but has yet to win one! Tanny put up a good fight but Melissa dominated her for most of the match and put her away with the deadly Vertibreaker ( 5 / 10 ).

The second match of the first round featured ROH’s Allison Danger taking on another Japanese wrestler named Yoshiko Tamura. Tamura just looks awesome – and apparently holds several titles in Japan. This match was considerably stiffer than the previous contest. These girls were really kicking the crap out of each other. Tamura finished Danger off with a Full Nelson Slam ( 8 / 10 ). Best match of the first round. Tamura vs. Melissa is going to be out of this world!

A couple of familiar faces showed up in the third match. Former WWE Women’s champion has Jazz resurfaced to compete against former TNA Knockout Simply Luscious (she was “Nurse Veronica” in TNA for like a hiccup). Jazz was playing the babyface and she was in the best shape of her life. Simply Luscious looks completely different than the last time I saw her – she looks like she’s taken her profession very seriously and molded herself into a solid performer. It doesn’t hurt that she’s beautiful as well. She has a lot of charisma too – either that of she was drunk (in a good way). Unfortunately for Luscious, she didn’t stand a chance against the powerful force of Jazz. Luscious tapped out to the STF allowing Jazz to advance ( 7 / 10 ).

The final bout of the opening round included ChickFight 4 champion MsChif taking on Sumie Sakai from Japan. Sakai has developed what I perceive to be an oriental trailer park trash gimmick since making a home for herself in the United States. MsChif is too scary to be the babyface, and Sakai is too cute to be the heel. One of Sumie’s signature moves is to kiss her opponent, and I’ve seen her use this move on several occasions. MsChif put Sakai away with a unique stretch submission hold ( 7.5 / 10 ).

I witnessed Yoshiko Tamura for the first time ever in the first round and she made a fan out of me for life. I already respect the hell out of Cheerleader Melissa so it goes without saying that I was highly anticipating the showdown between these two ChickFighters in the first match of the second round. Even though Melissa easily sailed through the first round and Tamura had a tough match, this bout was extremely grueling, particularly for Melissa who had her knee worked over by her relentless opponent. As the match progressed, Tamura unleashed an ungodly amount of punishment on Melissa, but she could not secure a victory. Like an indestructible comic-book Super-hero, Cheerleader Melissa mounted a comeback and pulled out the victory with a desperation roll-up after 25-minutes of incredible ChickFight action ( 9 / 10 )! Best match of the entire card.

Next up we had former WWE Women’s champion and ECW alumni Jazz taking on MsChif. Now Jazz is one person who wouldn’t be intimidated by MsChif’s head games. I’m sure this was a really great match, but I found myself zoning out reliving the Melissa/Tamura match in my head. Jazz once again used the STF to make her opponent tap out and advance to the finals against Melissa ( 7 / 10 ).

Melissa made her way to ringside and wanted to start the final match immediately and they started to brawl and smash each others faces in until ChickFight security separated them and calmed things down.

The finals of the ChickFight 5 tournament took place 24-hours later at a second event held in San Francisco. Both fighters were fresh and ready to kick the living crap out of each other. Jazz got on the microphone before the match and said she wanted to do it “ECW-style” and Melissa wanted to so it “Cheerleader Melissa-style,” which I know from experience is basically the same as ECW-style except it leaves more bruises. Falls counted anywhere and they dragged each other all over the arena floor scoring numerous near falls before ending up back inside the ring. The match lasted less than ten minutes and saw Melissa gut out the victory to finally win the ChickFight 5 Trophy on her fifth attempt ( 8 / 10 )!!!

After the match, Jazz announced that she signed with WWE to take part in the new ECW and put over Melissa as the deserved winner of ChickFight 5!

Bonus Material: Also included on this DVD are two other matches that took place on the second night of action. A 15-minute match between Yoshiko Tamura and MsChif for the NWA Women’s title; plus a tag team match between Allison Danger & Simply Luscious (the first ladies of Ring of Honor) and Sumie Sakai & Tanny Mouse (Team Japan). Frosting on the cake!

Final Thoughts: I highly recommend checking out any of the ChickFight Tournaments on DVD. The production is phenomenal and the in-ring efforts by the amazing female athletes from all over the world are fun to watch and well worth the price of a DVD. You’ve got to get out there and support your independent wrestling promotions.