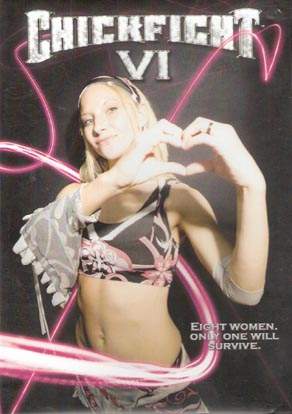 It is the only place where your dream girls will turn into your most feared nightmares, but you’ll be okay as long as you turn and run if you see one or more of them coming your way. ChickFight is back with another thrilling one-of-a-kind tournament jam-packed with some of the hottest women wrestlers on the planet beating the crap out of each other in a series if serious professional wrestling matches.

MsChif vs. Hailey Hatred: MsChif won the ChickFight 4 tournament, but came up short at ChickFight 5, so she was fired up and ready to reclaim her crown tonight. Hailey’s power advantage was no match for MsChif’s flexibility, not to mention the dreaded green mist that was spewed into Hatred’s eyes – helping MsChif advance to the next round ( 6.5 / 10 ).

KAORU vs. Tiana Ringer: Straight from Japan, KAORU looked like she was all-business, showing no expression on her face, as she went up against the Canadian Tiana Ringer. KAORU made the mistake of underestimating the not-so-intimidating Tiana, and eventually became frustrated by Ringer’s stamina. Tiana refused to give up, forcing KAORU to show some emotion, but used that energy to apply a submission hold until the Canadian passed out ( 7 / 10 ). KAORU kept the hold on for a few extra seconds to send a message to the locker room, and then stuck both middle fingers in the air sending a message to the fans.

Cheerleader Melissa vs. Daizee Haze: The Woodstock flower-child, Daizee Haze, made her first appearance at ChickFight, while Cheerleader Melissa won ChickFight 5 after coming up short in ChickFights 1 through 4. This was the longest and most competitive match of the first round. The battle between Melissa and Daizee spilled out of the ring, through the crowd, and throughout the building. They wound up back in the ring, where the intensity increased, as both fighters tried desperately to put the other away. Melissa made two unsuccessful attempts to hit the Haze with her deadly Verti-breaker. Nearing the point of exhaustion, the time limit expired at the 30:00 mark – but Commissioner Gabe Ramirez allowed for five more minutes. Five minutes later we still didn’t have a winner, so Gabe Ramirez ruled that both women would be eliminated from the tournament ( 8.5 / 10 ). Allison Danger ran out and pretty much declared herself the ChickFight champion, which angered Gabe Ramirez into changing his mind and ruling that BOTH Cheerleader Melissa and Daizee Haze would advance to face Allison Danger in a triple threat match as part of the second round.

KAORU vs. MsChif: This is the perfect example of a great match being over-shadowed by the match that happened before it. KAORU had MsChif well scouted, as she wisely ducked the green-mist and scored the victory to secure a spot in the finals ( 7 / 10 ).

Allison Danger vs. Cheerleader Melissa vs. Daizee Haze: For the first time in ChickFight history, the tournament featured a triple threat match between three hard-hitting female fighters. While Allison Danger had a relatively easy first round match (against Frankie), Melissa and The Haze went through thirty-five minutes of hell. Melissa and Daizee figured out that their best choice would be to gang up on Allison at the beginning of the match to make it an even playing field. The battle once again spilled out of the ring and into the stands, then the concession area, and out the door into the parking lot. Melissa ended up being thrown into the bushes – which only served to irritate the angry Cheerleader! They found their way back into the building, followed by the legion of fans that had filed out the door to keep track of the action. The battle continued for several more minutes until Daizee Haze miraculously won the match and earned a spot in the finals ( 8 / 10 ). Melissa raised The Haze’s arm in a sign of respect after the match. APW’s Mafia (Vennis Demarco & Chris Colioni) brutally attacked the injured Melissa after the match.

Finals – Daizee Haze vs. KAORU: The finals of ChickFight 6 took place the following night, so both fighters were well rested and ready to go to war with each other. It was clear who the fans were routing for, as the Haze remained the consummate crowd-pleasure while KAORU maintained a steady scowl on her face. The girls spent a few minutes on the floor, where KAORU tossed Daizee over the guard rail face first into some lucky fan’s crotch. A few minutes later, The Haze surprised everyone, including KAORU, by getting the pinfall to claim the ChickFight 6 championship ( 7.5 / 10 ). KAORU lost the chip on her shoulder and congratulated Daizee.

Bonus Material: As if that wasn’t enough, there are some cool EXTRAS included with this DVD. A match stemming from the beat-down Melissa endured at ChickFight saw Melissa join forces with Scotty Aboot to take on the Mafia (Chris Colioni & Vennis Demarco). Plus an exciting four-way elimination match featuring MsChif vs. Allison Danger vs. Tiana Ringer vs. Hailey Hatred. On top of that Frankie was back to wrestle male wrestler Johnny LaRocca in a match which included the electrifying unification of all ChickFight 6 participants against a bully male wrestler. ChickFight keeps getting better and better. Hop on board before it’s too late!