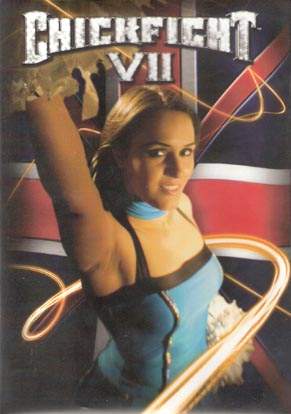 ChickFight ventured outside the Golden State of California for the first time, traveling all the way to the United Kingdom to present the seventh installment of the world-famous ChickFight series. ChickFight tournament brackets featured four USA vs. UK matches in the opening round. The tournament would also include one little English firecracker named Jezebel, who would come within an eyelash of shocking the ChickFight world.

Round #1 – Cheerleader Melissa vs. Sweet Saraya: I remember seeing 17-year veteran Sweet Saraya for the first time on a Queens of Chaos DVD and immediately recommending her to ChickFight owner Jason Deadrich. They referred to Saraya as a legend of British wrestling, but she was up against the “Future Legend” Cheerleader Melissa. They are both current legends in my books. I can’t remember Melissa ever getting stretched so badly by a single opponent as she was by the determined Saraya. My only complaint is that Saraya has abandoned her fiery red hair, which was one her most unique assets (in my opinion). As usual, ChickFight opened with a highly competitive grueling match that really got the fans fired up. Things got extra heated when Saraya flipped over the top rope getting her head stuck between the ropes (Mick Foley-style). The referee, security, a couple of local female wrestlers, and Ricky Knight (Saraya’s husband) tried to free her from the ropes, while Melissa callously tried to break through so she could further punish her squirming opponent. Saraya and Melissa had struck up a pretty intense feud throughout the UK around the time of this show, and this match resembled a can of gasoline thrown on an out of control wildfire. Saraya was finally released from the grip of the unforgiving ropes, while Melissa grappled fiercely with a tag team known as the Norfolk Dolls (who turned out to be Saraya’s 15 year old daughters). Saraya was “hurt badly” as her husband and daughter, Britney (one of the Norfolk Dolls), tended to her as she was carried backstage. No result for the match was announced.

Round #1 – MsChif vs. Jade: Unlike Cheerleader Melissa in the previous match, MsChif was portrayed as a babyface by default – due mainly to the fact that Jade is an arrogant rich girl from Essex, which from what I gather is Britain’s version of Greenwich, Connecticut. MsChif advanced to the next round after hitting Jade with a brutal face-buster off the ropes, distorting Jade’s facial features for life.

Round #1 – Lacey vs. “Jezebel” Eden Black: Lacey is one of the most well known female independent wrestlers in the United States. Jezebel proudly wears the RQW Women’s championship, despite her obvious limitations in the size department. This British spitfire reminds me of a mini-Lita. I was pleasantly surprised when Jezebel scored the victory, but was downright shocked when she won the match by making Lacey tap out to the Garden of Eden finisher! Eden Black solidified her status as a bonafide dark-horse.

Round #1 – Daizee Haze vs. Skye: They said that Skye was the first British female to receive a try-out with the WWE – which is news to me. The last time I saw Skye, on the first Queens of Chaos DVD, I was thoroughly unimpressed – but it seems she has improved significantly since then. This might even be a completely different Skye for all I know. It’s amazing how skinny Daizee Haze is, she desperately needs one of those Giant Gonzalez body suits with muscles airbrushed onto it. Despite being width-impaired, The Haze is one of the toughest women’s wrestlers of all-time. The Haze went back and forth with Skye for a while, making Skye look like a million bucks, before finishing her off with the Heart-punch/Mind-trip combination (which the British announcer called a Mafia kick).

Round #2 – MsChif vs. Cheerleader Melissa: Unless I missed it, they didn’t really explain why Melissa advanced over Saraya, but I assume it was because Saraya was unable to compete due to her “injury.” So Melissa was rewarded with the opportunity to face her American nemesis, MsChif. These two have all but murdered each other in SHIMMER competition. They did that amazing spot where Melissa locked MsChif in the Inverted Cloverleaf and forced MsChif to kick herself in the back of the head. Youch! Very few people can take that move and walk again afterwards. Melissa continued with an aggressive attack and eventually nailed MsChif with an Air Raid Crash to advance to the finals of ChickFight 7. 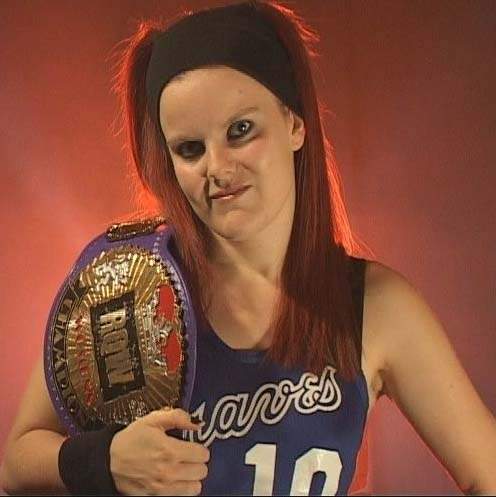 Round #2 – Daizee Haze vs. “Jezebel” Eden Black: Jezebel is living proof that you don’t have to be a monster to be an entertaining professional wrestler. So is Daizee Haze for that matter. Both of these girls rely heavily on their heart and determination, and miraculously it was Jezebel who scored a submission victory over Daizee Haze, once again using her patented Garden of Eden (armbar) finisher. Go Jez, Go!

Finals – Cheerleader Melissa vs. “Jezebel Eden Black: It was only natural for the tournament to feature a USA vs. UK finale. Melissa had been in all six of the previous ChickFight tournaments, and has made it to the finals three times, but was only fortunate enough to win the championship on one occasion – which was ChickFight 5. Melissa played the part of the powerful foreign heel battling the inspirational local underdog, filled with determination, and a heart the size of England. Jez took a serious beating at the hands of the cold-hearted Melissa, and sold it like a crash test dummy with a screaming voice box. Eden Black would make sporadic come-backs, only to be over-powered by the dominant Cheerleader. Jezebel refused to give up, but her dreams were squashed by Spine-crunching Kudo-driver (Vertibreaker) – making Cheerleader Melissa the ChickFight 7 Champion!

Melissa’s celebration was short-lived, as Sweet Saraya limped out to the ring and got Melissa’s attention with two words “Hey Bitch!” going on to say Melissa may have won the battle but not the war. Saraya warned Melissa that she wasn’t going to stop until she gets her revenge. Six months later, this feud would ultimate end Saraya’s career. During a match with Melissa on 6/16, a freak accident left Saraya with a severed tendon on her knee which would require immediate surgery.

Bonus Match – The Norfolk Dolls vs. Kharisma & Destiny: The Norfolk Dolls are Britney & Melanie Knight, both only fifteen years old – which is something you would never see in the United States. They said Britney was Saraya’s daughter but I’m not sure if Melanie is a legit daughter or kayfabed.

Stewart Allen wrote: I read your review of the ChickFight 7 show, and noticed a few things that you weren’t clear on, based entirely due to your unfamiliarity with the British scene. So, as someone who knows about that scene and has attended all CF events from that date onwards, I thought I’d drop you a line and update you on some particulars.

– Melissa vs Saraya at this event was their first meeting, so while it might have seemed like the midst of a feud, it really wasn’t. The intensity here came simply from the fact that Saraya was the “home” favourite (the show was co-promoted by Saraya and Ricky’s WAW promotion and took place in one of their regular venues) and she was drawn against the top name from the States.

– Jade’s character really isn’t a rich girl at all, nor is Essex the equivalent of Greenwich. I have no idea what the American conversion would be, but “Essex Girls” are stereotypically known to be dumb, blonde and easy lays. Have a look at Essex Girl on wikipedia (http://en.wikipedia.org/wiki/Essex_Girl) for a bit more background. It suggests that the nearest Americanism would be Valley Girl, but that doesn’t really work as Valley Girls are known to be rich, whereas Essex Girls are cheap (in every sense of the word).

– That Skye is the same Skye from QOC, and she is, as you noted, significantly better now than she was then.

– You indicated that Saraya/Melissa six months later would end Saraya’s career. It didn’t. She nearly had her kneecap ripped off the bone, but she made a recovery and was wrestling again within six months (despite doctors saying that it would be eighteen months, if ever, before she could even consider making a return to the ring).

– Britani Knight is indeed Saraya’s daughter. The other Norfolk Doll (Melodi) isn’t a daughter, but she does date Saraya’s son Zak, who also wrestles (as Zak Zodiak), so she’s essentially an unofficial extra member of the Knight Family.

So there you go… apart from that, it was nice to be reminded of the show. One of my favourite shows of last year.

Keep up the good work,