Home / Information / DVD Reviews / KayfabeCommentaries.com DVD Collection / My Side of the Story – Magnum vs. Nikita

My Side of the Story – Magnum vs. Nikita 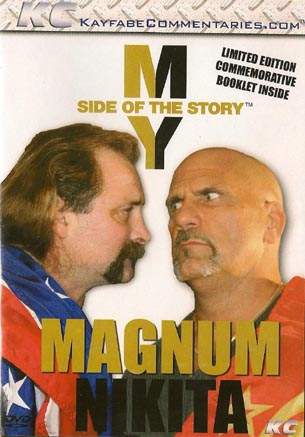 What could be better than a rare shoot interview with a highly influencial wrestler from wrestling’s boom period known as the 1980’s? How about two highly influencial wrestlers from the 1980’s? While Vince McMahon was taking cartoon wrestling to a whole new level, Jim Crockett was still pushing an athletic brand of wrestling based on blood, sweat, tears, and pure unadulterated drama. Two of the principals of this era were a beloved All-American “Mama’s boy” named Magnum TA and a beefy “Russian Nightmare” going by the name Nikita Koloff – the powerful nephew of the legendary Ivan. Nikita wasn’t a legit Russian, but he cared enough about wrestling folklore to transform himself into the character he was playing by shaving his head, learning the language, embracing the culture, and even legally changing his name to “Nikita Koloff.”

Magnum TA and Nikita Koloff were naturally drawn together in storyline due to the growing tension between the United States of America and the Communist country of Russia. The NWA simply could not pass up an opportunity to cash in on something that was on the minds of every single proud American. So for many wrestling fans, the war was waged inside NWA rings accross the country. It was an era when fans believed in what they saw on a wrestling TV program. The feud seemed to go on forever, and had an endless supply of steam, but was cut short when Magnum TA was involved in a tragic car accident that ended his wrestling career. Historians believe that Magnum was destined to become NWA World Heavyweight champion at some point.

Those of you who have followed my reviews of KayfabeCommentaries.com DVD releases, might find my critiques to be a little bit repetitive. The fact of the matter is this; pretty much everything these guys release to the public is tremendous and I would support them 100% with anything they choose to do. There have been one or two that I was not completely happy with, but the majority of the DVD’s have been enormously entertaining and very educational.

KC director Sean Oliver brought Magnum TA and Nikita Koloff together for a reunion (or sorts) and asked them to discuss their legendary feud, sharing the private details of their very public battles. First, Oliver sits each man down seperately and asks them the same set of questions, splicing the video together for the benefit of the viewer. When that is finished, Oliver brings the men together to share some more recollections of the past. It quickly becomes apparent that both men hold a great deal of respect for the other – and it’s not too difficult to realize why.

If you miss Kayfabe, you should already be a fan of KayfabeCommentaries.com DVD’s. And if you’re not then why not give this edition of “My Side of the Story” a shot. The 80’s was a wonderful time to be wrestling fan, and for those who loved it then, but hate it now, will be pleased to know there is a way that they can relive the drama through these well-produced shoot interviews.

If you watched NWA/WCW Saturday Night back in the mid-1980’s or read the Pro Wrestling Illustrated type magazines you knew of the feud between the “Russian Nightmare” Nikita Koloff and the “vastly popular” Magnum TA. It was the personification of good vs. evil and the Cold War which was still going strong. It was a battle that had the Russian holding the US Heavyweight title and the American wanting it back for his country. The feud could have gone for years but fate stepped in when Magnum AKA Terry Wayne Allen was nearly killed in a car crash that ended his career. Shortly after Koloff was turned face joining then NWA booker “the American Dream” Dusty Rhodes in the “Super Powers” tag team which won the 1987 Jim Crockett Sr. Memorial Cup with Magnum in their corner.

Both men have done shoot interviews but never together. Until now thanks to www.kayfabecommentaries.com who brought the two together for their My Side of the Story DVD series. The concept is simple: Allen and Koloff AKA Scott Simpson are interviewed separately with the same questions and Sean Oliver’s crew edits them in sequence. After the questions are done, Oliver brings the two men into the room to talk about the past. This is the second in the series, the first being former WWE Intercontinental champions Greg Valentine and Tito Santana. Like that DVD this one comes with a booklet outlining the feud and significant moments during it as well as bios on both men.

I gave the Valentine/Santana disc a good review. But I prefer this one because both men seem to have genuinely enjoyed working the storyline and each others company, meaning it wasn’t just another angle to them. This feud made Simpson a national name while it elevated Allen to the main event level on the NWA roster. I was shocked at the honesty Simpson gives about his level of inexperience in the business when he was paired up with the veteran Allen. It might take you a few minutes to get used to Simpson talking without the Nikita Koloff Russian accent (I know I did.) Both give honest answers and were a pleasure to listen to. Like any non-WWE produced DVD the one flaw of this DVD is the lack of matches (WWE owns the NWA/WCW tape library, commie bastards.) I would have loved to have seen all of the best of seven series for the US title on this presentation but that’s not to be.

You can buy this DVD from www.kayfabecommentaries.com where you can purchase items from their excellent Guest Booker series including the new Jerry Jarrett DVD.

Another great style of shoot interview is provided through Kayfabe Commentaries in their recent series with “My Side of The Story: Magnum/Nikita.” Unlike one-on-one question and answer style shoots, this interview blends two interview subjects asked the same questions separately & spliced together for every answer so that you will indeed get to hear their sides of the classic feud in the mid 1980’s. At the time, the United States & the Soviet Union were both huge world leaders, and Nikita was pushed as the villain to the patriotic sensation Magnum TA. Both men feuded over the NWA United States Championship, and even had a legendary “best- of-seven” series for the title that no historian of our sport will ever forget. The feud was legendary & the discussion is fantastic. Here’s your chance to re-live the moments through their own memories. After they answer the selected questions, Kayfabe Memories then reunited both Magnum & Nikita together and asked even more questions, telling us even more memories of this feud from over 20 years ago.

One Camera to simply focus on the interview subject during each man’s answers. The setting is a little dark for each person, but in the end when they reunite the lighting is much better which is I think the effect Kayfabe Commentaries wanted their viewers to build through.

The answers to all of the questions are very clear. However, the questions asked are not provided through any audio in the first half, but rather on screen for the viewer to read. They then will split the answers from both Magnum & Nikita in crisp dolby surround two-channel volume. The viewer will have no issues understanding anything, however the reading of all the questions can become a pain, as you just may want to listen.

Besides all the discussion, you will also get a great understanding on the personal sides of each individual. Hear great stories about their memories (or lack thereof) the first time they ever met in the ring & how they developed a match style working together. At first, it was another match, but when they began the epic feud, you become taken in by their styles & how Magnum covered working with a very green Nikita. But it wasn’t until after the “best-of-seven” series & when Magnum was finished in the ring due to a motorcycle accident that both men built up a tremendous respect & developed a close bond after the tragedy. You can hear about how each other persevered through adversity, and it’s seen here. Neat stuff to see…even though I wished this was done many years earlier, as opposed to so many years later on.

This DVD features a great story from an awesome time in NWA Wrestling. The story is memorable, and if you didn’t live through it, a viewer will probably wish they could have.

Buy this DVD. Enjoy the story as it’s told. Witness the reunion. Kayfabe Commentaries provides a great idea to a wonderful subject.