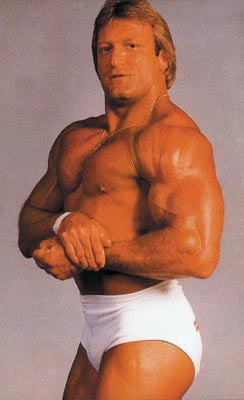 Legends Match – The Score Is Finally Settled:
–Brutus “The Barber” Beefcake vs. The Honky Tonk Man
Back in 1988, the Honky Tonk Man was the WWF Intercontinental Champion, in the middle of his dominating reign that would place him in history as the “Greatest Intercontinental Champion of All Time”. At WrestleMania IV, he was set to defend the title against Brutus “The Barber” Beefcake. Beefcake dominated the match, even escaping the Shake, Rattle, & Roll. Beefcake applied his finishing maneuver, the Sleeperhold to HTM, but Honky’s manager “The Mouth of the South” Jimmy Hart interfered, striking Beefcake with his signature megaphone. Over the next several months, Beefcake would taunt Honky, threatening to cut his signature hairdo. The two men were scheduled to finally settle the score at Summerslam 1988, but Beefcake was taken out by the “Outlaw” Ron Bass prior to the event and was forced to pull out. Honky Tonk Man went on to lose the Intercontinental Title to the Ultimate Warrior in 32 seconds, and HTM & Beefcake never settled their differences. Finally, 22 years later, at Night of Legends 2010 in Franklin, PA on April 10th, the Honky Tonk Man and Brutus “The Barber” Beefcake will end things once and for all! Will Beefcake be able to cut Honky’s hair? Will HTM prove he would have retained the title anyways? There’s only one way to find out!

Legends Match – Family Feud Renewed:
–Larry Zbyszko vs. David Sammartino
In the early 1970s, a young man from Pittsburgh named Larry Zbyszko began training under former WWWF World Heavyweight Champion Bruno Sammartino. He debuted on the historic Pittsburgh television show, Studio Wrestling, in 1973 and soon expanded himself across the country and beyond. As the decade came to a close, Zbyszko had established himself as a top star in the northeast region, capturing the WWWF Tag Team Championship with Tony Garea. But, no matter what, he couldn’t shake the fact that he was considered a protege of the “Living Legend” from Pittsburgh, Bruno Sammartino. When the two men met in an “exhibition match” in Allentown, PA in 1980, Zbyszko lost his mind and attacked Bruno with a chair, leaving him laying in a pool of his own blood. The rivalry between Zbyszko and Sammartino ruled wrestling for several months. Finally, they met inside the confines of a steel cage at the legendary Showdown at Shea supercard held in Shea Stadium in New York. The teacher bested the student that night as Sammartino came out on top.

It’s now 30 years removed from Showdown at Shea, but Larry Zbyszko still has yet to let go of his anger. He still refers to himself as the “Living Legend”, a moniker he adopted just to dig at his former mentor. And, when we here at IWCwrestling.com put up an announcement several days ago about David Sammartino appearing at Night of Legends 2010, Zbyszko contacted IWC’s head office about it. The details on his communication with IWC are sketchy, but we’ve heard word that Zbyszko merely heard that a Sammartino would be at Night of Legends, and Zbyszko wanted to get his hands on him. David accepted, sick of Zbyszko defiling his family’s name for three decades, and the match has been signed! Can the pupil finally satisfy his lust for revenge? Or will Sammartino be able to step up and defend his father’s legacy?

Legends Match – The Bird Man vs. The Wrestling Poet:
–Koko B. Ware vs. The Genius
Two wrestling legends make their IWC debut on April 10th at Night of Legends 2010 in Franklin, PA! “The Bird Man” Koko B. Ware will be taking on “The Wrestling Poet” The Genius! The pompous Genius has been making claims that he is finally coming to IWC to add some intelligence to the Night of Legends live event, especially after seeing Koko B. Ware added to the card. When Koko got wind of this, he took exception to The Genius’ comments, and asked IWC officials to sign the match for Franklin! It’s the Wrestling Poet meets the Bird Man as IWC returns to Rocky Grove High School!

Legends Match – Battle of Extreme Legends:
–Raven vs. “The Franchise” Shane Douglas
Several weeks ago, we revealed that Raven would be in the house at Night of Legends 2010. We now have received word that the IWC Director of Wrestling Operations, “The Franchise” Shane Douglas, has stepped up to take him on! It will be a Battle of Extreme Legends as these two former ECW World Heavyweight Champions square off on April 10th at Rocky Grove High School in Franklin, PA! These two men have taken each other on in an IWC ring before at A Call To Arms 1 in December 2003 in Johnstown, PA. That extreme rules match saw “The Franchise” come out on top. This time, Raven has vowed not to be pinned by Shane again. Will he live up to that vow?

BabyFace Fire Explodes!:
–Shiima Xion vs. Jason Gory
Jason Gory has had enough! Jason was give a second chance in Clearfield, PA to get into the Super Indy 9 Tournament against Johnny Gargano. Unfortunately for Jason he fell short once again. After the match, his former BabyFace Fire tag team partner Shiima Xion once again went to the ring to berate Jason and chastise him. However, this time Jason had enough! Jason challenged Shiima to a match at Night of the Legends. He also promised that this encounter would eclipse anything we have ever seen from the two in the past. Never before have these two been involved in a match against one another with so much emotion involved!

For only an additional $8.00, Night of Legends ticket holders can attend a pre-show press conference and private autograph session with the legends on hand that night before the doors open! Plus, you’ll get to see some exclusive IWC action!

Pre-Show Exclusive – Tag Team Challenge Match:
–“The East Coast Killer” Dean Radford & Jimmy Vega$ vs. “The Whole Shebang” Johnny Gargano & Logan Shulo
The first two men to qualify for the Super Indy 9 Tournament, Logan Shulo and Johnny Gargano will join forces to meet two former IWC Champions, Jimmy Vegas and Dean Radford. Logan Shulo is on a hot streak so far having just defeated Jimmy Vegas at Clearfield Cataclysm 2. There’s no doubt that Logan wants to continue his winning streak through Super Indy 9. This time however, he will have to join forces with fellow SI9 competitor Johnny Gargano. Will Gargano and Logan be able to co-exist with so much on the line at Si9? Will either man have what it takes to defeat two former IWC Heavyweight Champions?

Pre-Show Exclusive – Super Indy IX Qualifying Rematch:
–Justin Idol vs. Michael “The Bomber” Façade
Façade and Idol went to a time-limit draw in Clearfield, PA, for their Super Indy 9 Qualifying match. For those in attendance, you know why they are two of the best young talent on the INDY scene today! Long time IWC fan Jan Templeton called their match, “An IWC Classic!” Immediately following the match, IWC Owner Chuck Roberts announced that there two men will meet once again at Night of Legends 2010 to see who will move on and make it into the SI9 Tournament. This is one match that you don’t want to miss!

—Plus much much more!

Tickets, ticket packages, and seat licenses are available now on IWCwrestling.com!
====================
Ever want to be a professional wrestler?
Do you think you have what it takes?
Then the Iron City Wrestling Academy is for you!
Email [email protected] for more information.
====================
The International Wrestling Cartel has been western-Pennsylvania’s largest and most exciting wrestling promotion for almost 9 years and 100+ live events. Using a healthy dose of established talent like Delirious, Daizee Haze, Ricky Reyes, Irish Airborne, and Sami Callihan, along with an impressive array of fast-rising local talent such as Shiima Xion, Jimmy DeMarco, Johnny Gargano, Jason Gory, Ray Rowe, and John McChesney, a mix of guest superstars such as Ric Flair, Mick Foley, Bret Hart, Jerry Lawler, Sgt. Slaughter, Shane Douglas, Raven, The Sandman, and more, IWC has grown to become one of the most successful indy promotions today. For more information go to www.IWCwrestling.com, visit us on MySpace at www.myspace.com/iwcwrestling.com, or on Facebook at http://www.facebook.com/group.php?gid=5677109121. You can also subscribe to our Twitter news feed at www.twitter.com/iwcwrestling.