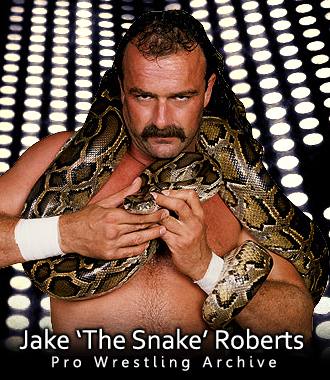 Jake “The Snake” Roberts has been signed for Night of the Legends II: Unfinished Business on April 13, 2013, in Waynesboro, Va.

Roberts is one of the most recognizable legends in wrestling and is known all over the world. Jake has struggled in past years with drugs and alcohol abuse but thanks to help from his longtime friend, Diamond Dallas Page, Jake has made a remarkable comeback.

Jake is preparing for his farewell tour and will make Waynesboro, Va., one of his first official stops.

Advance tickets are on sale now for $10 General Admission and $20 Ringside.

Card is subject to change without notice.

Top Rope Pro Wrestling is offering 150 VIP Packages to get your photo taken with Jake “The Snake” Roberts live at our April 13 show in Waynesboro, Va. The VIP Fan package is $20 online or $25 at the door (while quantities last).