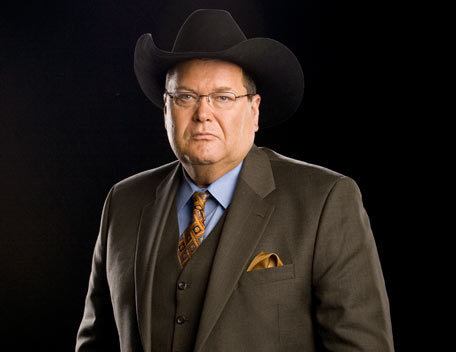 Jim Ross‘ boyhood heroes were fellow Oklahomans Will Rogers and Mickey Mantle. The irony in idolizing an actor and a sports icon, then earning legendary status in the profession that combines both — pro wrestling — is hard to ignore.

But there’s a different throughline that Ross observes.

“Both those men, in their books and their comments and when they were interviewed, that’ll tell you how big a thrill it was to do their profession in New York City,” Ross said of Mantle’s reign in centerfield at Yankee Stadium and Rogers’ works dotting the Great White Way. “So I couldn’t think of a better place to start for an Okie who’s had a long journey from his farm to New York City.”

WWE Hall of Fame announcer Ross is speaking of “Ringside: An Evening With Jim Ross,” a one-man spoken-word tour that kicks off with a pair of performances at Manhattan’s Gramercy Theatre on March 1 before hitting other parts of the country.

Ross is juggling his stage work with a weekly Podcast One project launching soon, and he just signed with FoxSports.com for a regular column opining on wrestling and likely his other loves, mixed martial arts and football.

He says the Fox Sports deal could expand into other projects, but until then, he’ll have more than enough to do by blogging about the squared circle, gridiron and octagon.

“For somebody that was supposed to slow down, I haven’t got that slow-down gear in me, I don’t think,” Ross said.

He’s speaking of his “retiring” from WWE, an announcement suddenly posted on WWE.com last Sept. 11. It’s a subject that will undoubtedly spur many queries during the “no holds barred” Q&A session of his “Ringside” tour.

Ross has already started to open up more about the circumstances that led to his departure from WWE. They center around his appearance at a “30 Years of WrestleMania” symposium last Aug. 17, the day before the SummerSlam pay-per-view. The event was intended to promote the “WWE 2K14” video game.

As Ross explains it, “The wheels came off a wagon I didn’t build.”

A panel moderated by Ross veered from the symposium subject on several occasions, often initiated by “Nature Boy” Ric Flair.

“I knew that when it was over, a lot of the top WWE officials were very anxious to get Ric Flair out of the facility,” Ross recalls. “So I knew there was some concern there, but I didn’t know that the concern involved me. A story started out of misinformation that I had been drinking with Flair all day. And the issue was that if they [WWE officials] had checked their schedule, I had been booked all day with WWE activities and SummerSlam that had nothing to do with Ric Flair.”

Flair and Ross were briefly in a ring together hours before the symposium during a public Fan Axxess event. Ross was co-hosting when Flair hit the ring to confront Damien Sandow as part of the show.

Ross said 2K Sports, not WWE, produced the event and hired him to moderate.

“I knew before we started, we didn’t have any script, we had no prompter, we didn’t have a producer in my ear,” Ross said. “And we had a panelist that was obviously impaired that should not have been on the panel. So you know that things have a chance, now, to not be the smoothest rides one has been on.”

Publicists for Flair and the WWE have yet to respond to emails seeking comment.

Flair told “Stone Cold” Steve Austin the next day as part of Austin’s podcast that officials with the video game company were happy with the event and that he was “dumbfounded” by WWE’s displeasure.

Flair has since returned to the company’s good graces, starring on an “Old School” episode of “Monday Night Raw” and having his surprise appearance at a San Francisco 49ers team meeting the night before their playoff game against the Green Bay Packers heavily promoted on WWE.com.

As for Ross, he admits that the situation involving “a handful of misguided, misinformed WWE people” kept him from possibly going out on a more poignant note, like calling one last WrestleMania match. But he added that the freedom couldn’t have come at a better time and that the circumstances even provided a necessary nudge.

“My job was to keep the rudder in the water,” Ross said. “I didn’t do that. And so, the decision was made that we part ways. And to be honest with you, and this is not looking back, or trying to cover somebody’s tracks, or cover my own [behind], I was really looking for an opportunity to move on. I wanted to get into the podcast business, I wanted to get into one-man show stuff . . . I wanted to look at other opportunities, like this Fox Sports thing that I’m doing now. And I knew I couldn’t do those things while I was under contract to the WWE. But to be honest, to be totally frank with you, I had such a loyalty to that company, and I still do, that after 20 years I didn’t know how I was going to say goodbye.”

The whole SummerSlam saga highlights the juxtaposition of today’s more corporately tinged WWE, which is trying to capture the same success as the late-1990s Attitude Era minus the very irreverence that made it such a juggernaut. The recent real-life departure of disgruntled free spirit CM Punk is unfortunate, said Ross, considering he’s what the company needs.

“This whole locker room has a different feel to it, and a different — they’re not as edgy as the Attitude Era locker room,” said Ross, also the former vice president of talent relations for WWE. “They’re not as competitive. I don’t know that they’re as hungry. But now, CM Punk is different. [Compared with] today’s corporate wrestler, CM Punk is a little bit of a rogue. And I don’t mean that in a negative way.

“Over the last two of three years, he’s been my favorite WWE performer to watch in the ring, without question. He would’ve been a huge star in the Attitude Era, without question. Here’s the deal: He’s a very cerebral guy, who has an old-school spirit, that really cares about every aspect of the business. I think that he needed time off, ample time off, to recharge his batteries. I think he has, for lack of a better term, a major case of burnout. And I think the problem should have been recognized and addressed much earlier than letting it get to a head and him being so frustrated and such a sense of hopelessness that he decided to go home. Walking away from a problem is never a solution. Never. Solve the problem.”

Ross says Punk may benefit by taking a “season” off to enjoy his native Chicago sports teams and mend his body and mind. If afterward he can’t find common ground with WWE, he may not face the same dearth of alternatives other grapplers have faced.

“At some point, he is going to want to get back into a game. Where that game is, I don’t know,” said Ross. “Who’s gonna be playing in that game, good question. But I would be surprised to see him wrestle anywhere other than WWE on any ongoing basis. But I can certainly see him, if somebody had a new promotion, and they wanted someone with a bright mind and a fresh mind, who understood the product and who could communicate well, which he can do, he might be a great fit in a new promotion: upper management, creative, working with talent. He may be perfect for that.

Then the famous broadcaster offered the ultimate job reference.

Punk has trained in Gracie Jiu-Jitsu and even was promoted by Rener Gracie in an interview with FoxSports.com last week as having the potential for an in-cage MMA career.

“He’s glib, he’s intelligent, he’s well-spoken, he understands infinitely the product, and he knows how to entertain,” Ross said of Punk. “He has everything that an MMA company would desire. And I think he would just be phenomenal.”

Ross seems content in putting over Punk for a broadcast gig, comfortable in where his own future lies. After all, for “Good ol’ J.R.,” being able to adapt to new challenges has been not only helpful, but essential.

And it has given him confidence that he’ll have more than enough unique stories to satisfy the crowd on March 1.

Related Itemscm punkjim ross
← Previous Story CBS recently spoke with Stephanie McMahon about the Over The Edge 1999 pay-per-view
Next Story → MensHealth.com presents: “Women Wrestlers Who Can Kick Your Ass”