Ken Patera shoots on…………… Everybody! 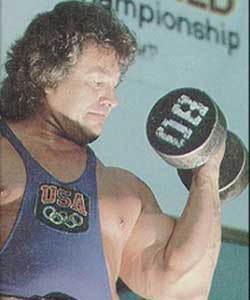 KEN PATERA REVEALS HOW MUCH WWF WAS PAYING HIM DURING HIS FINAL STINT, THE NEAR-RIOT WHEN HE JOBBED TO THE RED ROOSTER,  HOW A JUDGE THREW OUT HIS ONE SIDED AWA CONTRACT, & MORE By WorldWrestlingInsanity.com

Long before “The World’s Strongest Man” and “Your Olympic Hero,” there was only one.  That man’s name is Ken Patera.  Now the legendary star joins ClubWWI.com for a rare 46 minute shoot interview that you won’t soon forget.

With wrestling behind him and a new career to make him happy, Patera has no qualms about shooting on everything from his career.  The shoot includes talk of: Why He Retired At The 1988 Survivor Series, Walking Out The Night He Was Asked To Lose The Georgia Title To Tommy Rich, Early Days of AWA Cameraman Eric Bischoff, Why No One Does The Spinning Full Nelson Today, Public Reaction After He Cut Andre The Giant‘s Hair, Showcasing His Real Life Issues During His WWF Return, Why Big John Studd Didn’t Work As “The World’s Strongest Man,” Rooming With a Rookie Ric Flair, The Grand Wizard, Lou Albano, Vince Sr., Rocky Johnson, Big Bossman, and More.  The complete list of topics is available on both ClubWWI.com and WorldWrestlingInsanity.com.

Ken left the WWF at the 1988 Survivor Series and hasn’t returned since.  A number of factors played into his decision – all of which Patera details during his ClubWWI.com shoot.  One of those factors – money.

“(Vince McMahon) was paying me around 2500 a week.  Back then it cost over 200 a day just to be on the road when you figure out your hotel room, rent-a-car, and so on and so forth.  And then you have a home and kids.  That’s another couple hundred a day.  When you’re making 2500 a week and you have to pay your taxes and accountant, well you’re working for nothing.  This went on for about five or six months.  I just got fed up with it.”

Patera goes into detail about his final conversation with Vince McMahon (who he refers to as a “ruthless son-of-a-b****”), McMahon’s request, and the things he did on the way out.  With his strong amateur background, Ken wasn’t concerned with losing to other wrestlers before his final appearance.

“I remember I did some jobs in the middle of the ring.  What was the kid’s name who walked around like a rooster?…Terry Taylor.  I did a job in the middle of the ring for Terry Taylor at the Boston Garden.  I thought there was gonna be a riot.  Oh yeah. ‘Bullsh*t!  Bullsh*t!  Bullsh*t!’  They were going nuts.  It was an afternoon show.  I laughed all the way up the ramp.  I laughed all the way back.  I said, this is a cartoon.”

Ken goes on to discuss the changing face of wrestling, the first time he was handed a WWF script, McMahon Jr. vs. McMahon Sr., cutting Andre The Giant’s hair, and tons more.  Although his payouts from the WWF were somewhat one-sided, nothing compared to the contract he signed with the AWA.

“I had (a contract) with Verne Gagne, but it was so one sided that a judge threw it out.  I worked for Verne down in Shreveport, Louisiana.  I was making 45 bucks a day and I’m not exaggerating.  That’s what everybody was making down there.  It was a horrible territory when I first went down there.  So he wanted 10% of 45 bucks a week.  Well after I got done paying all my expenses, I didn’t have ten cents left much less ten dollars.  I was training at a gym down there and there was a judge there.  So I showed it to him.  He started laughing.  He said, ‘I’m not even going to charge you for this.  This is so one-sided that it’s an invalid contract.  He’s not giving you any consideration of say-so in this.  He said a contract has to be balanced between an employer and an employee or else it’s invalid.”