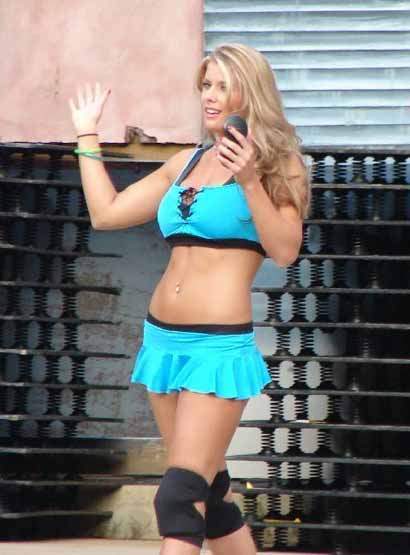 On October 16th, Wrestling Weekly host Doc Young and Les Thatcher were joined this week by Krissy Vaine.Â  Wrestling Weekly airs every Tuesday at 8pm Eastern at www.wrestlingweekly.com – Krissy Vaine joined Doc & Les as their first guest.Les starts the interview by saying that Krissy Vaine is a friend of his & they’ve known each other for around four years & noted that Krissy and her boyfriend, Ryan O’Reilly, became the most talked about couples in wrestling last week. Les continues by talking about Krissy and Ryan requesting their release from WWE & Vaineâ€˜s background in pro-wrestling. Krissy explained in detail why she chose to leave and apologises for anyone she may have disappointed & emphasised “I still have a huge, huge passion for this business” and said she had a wonderful experience theÂ  past few years with WWE. Vaine noted that being away from her family hasÂ  made them closer & realised how important they are. She then spoke about the differences between developmental and being on the main roster &Â  that it was easier to return home if necessary but “youâ€˜re needed for TV & canâ€˜t just go”. Krissy continued by saying that she thought about her decision for months & months before deciding to go through withÂ  requesting her release.

Les then spoke with Krissy about her putting emphasis & valuing her long
term relationship with her boyfriend Ryan. Krissy Vaine then spoke about
her boyfriend in some detail & that if they were to be on different
schedules with WWE that nothing would be worth risking a relationship
like they have for. Vaine say’s she hopes to stay involved in wrestling
& left WWE on good terms. Krissy then talked about TNA saying they have
a good product & have been growing since day one. She continued by
saying “I would love to do stuff for them (TNA), I have so many friends
there…I would love to have an opportunity with them”. Krissy said she
watched TNA’s “Bound for Glory” pay-per-view and spoke about the women’s
match. Doc asks if Krissy Vaine would be able to handle the travel at
TNA. Krissy points out that TNA is a much lighter schedule & said that
when you get called up to WWE, you sometimes still have to go to
development and train. She stated that sometimes it could be seven days
a week & they wasn’t time for friends & family.

Doc asks what where some of the plans WWE had for Krissy. Les says he was
surprised that Krissy Vaine wasn’t called up sooner & Krissy said that timing & luck
played a part in her getting on â€˜SmackDown!’. Les asked Krissy is she thinks Nattie
Neidhart is ready for a WWE call-up. Vaine states that Nattie is ready and that everyday
she’s building confidence each day & “if given an opportunity, she would
run with it”. Krissy highlighted said she was in developmental for a
year & a half. She then said that although you have friends in
developmental it’s competitive. Les spoke about the trainers which
Krissy Vaine had when she was training, who included Brad Armstrong,
Ricky Steamboat, Dr Tom Pritchard etc. Krissy pointed out she had an
experienced trainer when she started out, who worked with The Hardyz &
Shannon Moore. Vaine spoke more about her training and that it was a
fantastic experience to have different trainers and “get a wide array of
opinions, which makes you so much better”.

Les says that Krissy & her boyfriend’s website is www.ryanandkrissy.com
& they are looking for a webmaster. Anyone interested can e-mail at
[email protected]

A question from a â€˜Wrestling Weekly’ listener is a day in the life of a
WWE Diva. Krissy noted “you get to house shows about 5, it’s more
relaxed & talk to who you’re working…there’s usually 10-15 people
working at house shows, TV’s completely different. You are there…about
1, you have one of the writers…agents tell you what to do & then work on
what you’re supposed to do…promo’s and whatnot, then you do your make up
& hair which takes hours…you go and get ready & wait to be summoned for
when you go to work”. Doc asks what happens after the show. Krissy Vaine
points out as she was working both Raw/SmackDown! She travelled on to
the next town & concentrated on getting to work. Les highlights that TV
is one long day with Krissy agreeing.

Doc then asks what were the plans for Krissy’s boyfriend Ryan. She noted
that he was on the road for a few months, working each brand and
highlighted that they had big plans for Ryan and Krissy noted that he
has a lot to offer. DiCapo in the â€˜Wrestling Weekly’ chat room asks
Krissy if anyone has told her she looks like the actress Tara Reid.
Krissy Vaine points out that “yes they have actually”. Doc asks how she
enjoyed Shimmer. Krissy said she enjoyed it & liked it a lot. She then
spoke about the ‘Shimmer’ crowd which is “mostly all girl fans”. Doc
talked with Krissy about the WEW promotion & they then spoke about
â€˜Shimmerâ€˜ again. Doc & Les then thank Krissy for being a guest & they
will be having Ryan be the guest next week.

Krissy Vaine’s official website is at: www.ryanandkrissy.com and their
e-mail for bookings is [email protected]