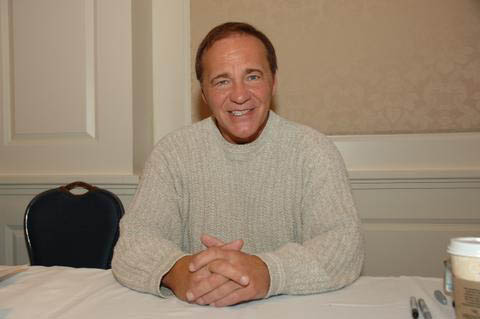 * What is your involvement with NXT?

“Well you know, I’ve been a big fan of NXT…they film it five miles down the road from me. I’ve been going down, and that was a big mistake because now I’m emotionally involved and entangled in all these new guys, talent that’s training there. They have the same dream I had; you can see it in their face, they want to learn. It’s really a cool place. It’s kind of like an omen to me that they would just happen to build this thing five miles down from my house. There’s really not too many people left in the business that know what I know, so it’s working out good where I’m going to be involved. When I go down there I get a chance to pass down the hidden secrets of wrestling’s illuminati to a new era; so it’s really cool…There’s a trick to it. You’ve got a whole bunch of big tough guys, but unless you figure out a way to be different …With wrestling, like any other sport, the fans get emotionally involved with their favorites…you get into their emotions. That’s the secret that they have to be taught, because they’re great athletes and have a great training facility, and they’re learning moves and becoming wrestlers, and that’s great, but to attach to the fans you have to be a personality, and you have to be able to grab that microphone and talk to people, and let your character loose and be creative. It’s a different story. Any idiot can pick someone up and throw them, but drawing money is a different animal.”

* In Chris Jericho’s book, he actually said you were the worst commentator he ever heard. What are your thoughts on that?

“Here’s the story on that. At the time, Chris was a young guy and he didn’t know what he was doing, along with a bunch of other guys; there was a whole group of them. There was Chris Jericho, Eddie Guerrero, Perry Saturn, Dean Malenko, and maybe even someone else, and these were the newer guys coming in to WCW trying to get a break. They were getting upset at the promotion, and a couple of times at me but it wasn’t my fault…These guys were all good athletes, but they were all 5’8”, 5’10”, 180 pounds, 190 pounds, and at that time in WCW who were the big stars that they were pushing? Hulk Hogan, Scott Hall, Kevin Nash, Sid Vicious; these guys that were 6’8”, 6’6”, 300 pounds. So when they were wrestling these guys, every once in a while I’d be getting a message over the voice on the headsets about ‘Hey, mention how much Sid Vicious towers over Dean Malenko’ or ‘How much bigger Kevin Nash makes Jericho look like an ant’. I didn’t want anybody telling me what to say and I ignored them anyway, but I got the drift. And in that time, what could you say; Jericho’s as big as Sid Vicious? So I think the guys let some steam off on me, but it really wasn’t me talking; the office wanted those points made to push their big stars who were giants compared to this new generation of smaller, high-flying guys that were trying to get in. So I don’t blame him for saying it; if everybody liked everybody it would be a pretty boring world.”

* How did wrestling in New England and the Northeast compare to wrestling around other parts of the country?
* What is his opinion of the WWE Network?
* What were his thoughts on the Dangerous Alliance?
* What was it like being around Bobby Heenan doing commentary?
* Does he feel that “cool” heels like the nWo had a negative effect on the wrestling business over time?

This interview is available for listening at http://www.iyhwrestling.com/viewnews.php?autoid=24866.