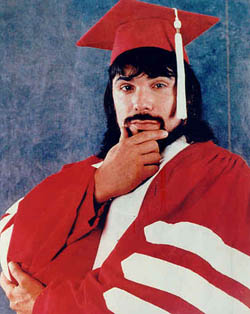 It’s going to be a star-studded night with worldwide media, a red carpet, and great live performances. Open to the public, the launch party for Evan Ginzburg’s new variety/talk show, Evan Ginzburg’s Legends TV (co-hosted by Steve Ludwig) will take place July 27 from 6-10 pm at the beautiful Red 58 restaurant/bar (www.red58nyc.com) in Manhattan. Located at 158 West 58th Street between 6th and 7th Avenue. such stars as Lanny “The Genius” Poffo, Edwin Vazquez, Oliver Sean and other surprise guests will be appearing.

Evan Ginzburg currently hosts both Legends Radio (www.legendsradio.net) and Legends TV (www.legendstv.net) Evan Ginzburg is a 20+ year radio veteran formerly of 50,000 Watt WBAI-FM 99.5 NYC. Legends Radio is co-hosted by longtime journalist and photographer Dr. Mike Lano. Evan is the Associate Producer of Darren Aronofsky’s “The Wrestler” starring Mickey Rourke, Marisa Tomei, Evan Rachel Wood. He is the Producer of “Theresa Sareo- Alive Again” featuring Gary Sinise (Forrest Gump) at www.aliveagainmovie.com (with box cover quotes by HBO, Hillary Clinton and Michelle Obama). Evan is also the Director of the upcoming music documentary, “The Stage is an Altar” and the author of “Apartment 4B, Like in Brooklyn”.

Lanny Poffo’s wrestling career in the WWF was highlighted by a victory over Hulk Hogan in a match seen by over 4 million viewers live on NBC and the subsequent appearances on “Live with Regis and Kathie Lee” and “The Jonathan Ross Show”
He wrestled as “Leaping” Lanny Poffo and “The Genius” As The Genius he would write and recite an original poem before the match.
He now tours the world as a motivational speaker. He’s written two books, both of which are available on his web-site.

Oliver Sean is coming from Europe. The singer/songwriter’s third studio album ‘So Good’ was released in 2011 and had several hits including an MTV Europe Music Awards Nomination in 2012, Vh1 Top 10 spot, No. 2 on an International chart listing, Grammy nomination consideration in 9 categories, and a Vh1 Specials feature. The singer’s recent music video for his 2012 single ‘All I Remember’ hit the Vh1 Hit List in January 2013. Oliver Sean’s new single and music video ‘(are we) Doing That’ is scheduled for worldwide release this August.

Edwin Vazquez Singer, Songwriter, Composer, Guitarist, Drawing Artist & Actor, has composed over 200 songs, and is internationally known, Some of his works: Edwin recorded at The Hit Factory for the PAUL SIMON “SONGS OF THE CAPE MAN” CD based on the life of Salvador Agron. He recorded on 2 tracks, “Adios Hermanos” and “Satin Summer Nights” in which worldwide superstar MARC ANTHONY did lead vocals. This CD featured legendary artists like RUBEN BLADES, DANNY RIVERA, EDNITA NAZARIO, etc. Edwin recorded his first self produced C.D. called Faith dedicated to the memory of his father Roberto Vazquez. This sublime sounding c.d. is an organic version of Latin progressions & rhythms fused with pop elements that include some of the very songs that Edwin performs. Songs like Bailarina, Warixe & Querida; these original songs musically express the Latin roots that stem from the influences of his Father Roberto Vazquez trio music along with the multitude of musical influences Edwin experienced growing up in Brooklyn, New York. Edwin’s NEW EP was released last month during his performance at the Gibson Studios (formerly known as The Hit Factory). Edwin Vazquez Musica consists of the great artists, Alpha Halvorsen, James Grover and Peter Dunphy.

Attention all business owners, you can have YOUR LOGO shared internationally. We will have a “step and repeat” (a large banner for promo purposes) RED carpet and VIP interviews at this event. The interviews will be professionally recorded and the photographs will be published, and shared internationally, press and media will also be in attendance. If you are interested in promoting your business, this is a great opportunity to get your name recognized internationally. Above are the bios of the featured performers and host of this event, we will also have additional VIP guests attending. If you are interested, please contact us at [email protected] or [email protected].

It’s going to be quite the glamorous evening. Sponsored by Cynthia Sepulveda-Caballero’s Flaco Coquito, this event will feature great live performances, media interviews and great networking opportunities. Come on down to the event of the summer as we present the launch party for Evan Ginzburg’s Legends TV, Saturday July 27 at Red 58.