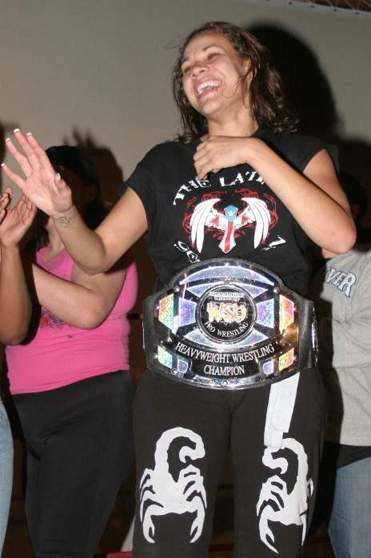 At ACE Pro Wrestling, on 10/16, Martinez defended her world title against the WSU Tag Team Champions, Jana & Cindy Rogers, in a triple threat match. The match started off as one would expect, as Jana & Rogers took turns beating down the fighting champion. However, Martinez would fight back and eventually neutralize her opponent’s advantage.

Despite working together as a unit, Jana & Rogers seemed to make several mistakes. Martinez was able to capitalize. While Rogers had Martinez up for a fireman’s carry, Rogers went to spin with Martinez to get more power, but accidentally bumped into Jana. Jana went flying. The small mistake was costly for Rogers, as Martinez took advantage of Rogers confusion and rolled her up for the 1-2-3.

For Rogers & Jana, frustration set in. Both women have had shots at the WSU World Championship in the past, but neither have been able to win that prestigious championship. Again, Martinez proved why she is the best in the world.

The Saints chased the WSU Tag Team Champions out of the ring, the very tag team champions the Saints will be facing on 11/6 when WSU debuts on iPPV.

Mercedes Martinez thanked the Saints for their help and gave the Saints her endorsement, calling the current WSU Tag Team Champions, “Paper Champs”.

However, don’t take it from us, see it for yourself as WSU cameras were on hand:

For webmasters, here is the embed code:

WSU goes On The Road again this Saturday night, when WSU returns to Fight The World Wrestling in Long Island, NY. Alicia, who is challenging Angel Orsini for the All Guts, No Glory Championship on iPPV on 11/6, will be taking on FTW’s Candy Cartwright. This will be Cartwright’s first chance to be featured on WSU cameras, but she has a challenging task ahead of her, taking on the only grandslam champion in WSU history, Alicia.

For full details on Alicia vs Cartwright, check out: http://ftwprowrestling.com/FTW_Wrestling/EVENTS.html

Alicia has also launched a Facebook account where fans can interact with the Grandslam Champ. To talk to Alicia online, you can see her on facebook at Facebook.com/aliciawsu

WSU will also be filming an upcoming shoot interview with Alicia, to submit questions, contact us on Facebook at Facebook.com/wsuwrestling

Don’t forget, WSU debuts on iPPV on 11/6! For full details visit WSUWrestling.com and GoFightLive.tv today! All the top stars will be there, including the WSU debut of Homicide!?!?!