Metal superstars and superstar wrestlers bang heads at Heavy TO in Toronto! 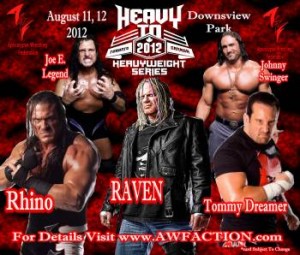 What do rock superstars MARILYN MANSON, SLIPKNOT, FIVE FINGER DEATH PUNCH and SYSTEM of a DOWN have in common with pro-wrestling superstars RAVEN, RHINO, TOMMY DREAMER and JOHNNY SWINGER?

All of the named artists and a whole lot more will be taking over Downsview Park in Toronto, Ontario, Canada on the weekend of Sat. Aug. 11 and Sun. Aug. 12 as part of LIVE NATION CANADA’S HEAVY T.O. two day heavy metal, hard rock and, now, professional wrestling festival!

Just announced for this year’s HEAVY T.O. is the very first HEAVY T.O. HEAVYWEIGHT SERIES, a two day event held over the course of the festival that will feature the very best wrestlers from around the world competing in in-ring action courtesy of Live Nation Canada and the Toronto based Apocalypse Wrestling Federation.

Other Internationally known metal acts appearing on the weekend bill include DEFTONES, LAMB OF GOD, DETHKLOK, KATAKLYSM and more!

Ticket information, directions to Downsview Park and a complete list of bands playing can be found at www.HeavyTO.com whereas more specific information regarding the inaugural Apocalypse Wrestling Federation HEAVY T.O. HEAVYWEIGHT SERIES, including a complete list of wrestling talent, wrestling show times and headline matches to be held each day will be posted online at www.AWFaction.com, the official website of the Apocalypse Wrestling Federation.

Please note that the price of admission DOES include both the music and wrestling and the scheduled talent lineup is subject to change without notice.

Weekend passes as well as day passes to this event are on sale now!

It’s the heavy hitters of rock and professional wrestling, together!  One place.  One event.  One awesome weekend!