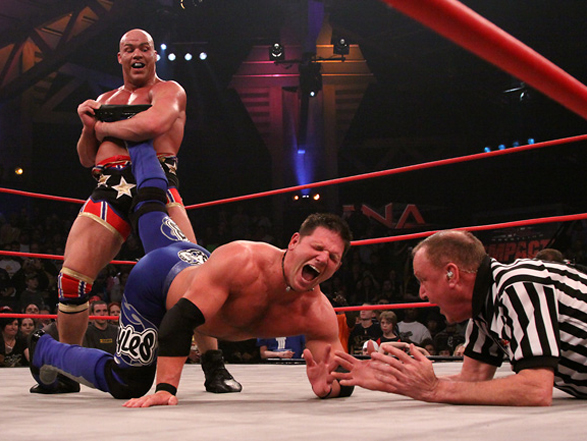 Kurt Angle: These Are The 10 Best Cities To Wrestle In

Where are the best places in the world to wrestle? We asked the Master of the Ankle Lock to find out.

It’s true, it’s true… our Olympic hero Kurt Angle spoke to us and gave us his list of the 10 best cities to wrestle in anywhere in the world, along with his favorite memories from each place. As an Olympic gold medalist and 12-time World Champion between WWE, TNA, and New Japan/Inoki Genome, Kurt knows his way around the world of wrestling, providing classic in-ring performances and winning gold everywhere he has gone.

After 15 years in the business, here are the cities Kurt Angle declares to be the best for wrestlers to perform in.

Source: Flickr user Leon G
New York is where WWE started and they continue to sell out there time after time. It doesn’t matter if it’s a pay-per-view, a television show, Wrestlemania or just a house show, you have to put on your best performance there because it’s demanded by Vince (McMahon); he shows up there even if it’s just a house show. The most memorable match I ever had in New York was probably my match with Eddie Guerrero at Wrestlemania 20 just because he was so great and the crowd was so into it. I wish Eddie was still here. Source: Flickr user Chris Yunker
You’re always going to draw a great house in Chicago, and the fans there are some of the most responsive fans in the world. They just love wrestling. Any place in the Midwest is great for wrestling, but Chicago is the premium town. You know you’re going to be appreciated there. I remember my Wrestlemania match there with Rey Mysterio and Randy Orton had to be cut by eight minutes because Rey had such a long entrance, so we just had to make it work when they called for the finish. That’s how you know you’re in the ring with pros. Source: Flickr user Dany Perry
Los Angeles has such a great cultural mix, and the white, black, and Hispanic fans all show up and sell the building out. The thing that’s such a big surprise for the wrestlers is when you get so many celebrities who show up in the L.A. crowd, and they want to be part of the event. Wrestlemania 21 with Shawn (Michaels) was my favorite event there. The funny thing is, we just sat down and got to know each other during the week and only went over about 5 percent of the match you saw. The rest of it just came together like magic. Source: Flickr user Todd Carr
Wrestling is just a tradition in San Antonio from the time they had Southwest Championship Wrestling there. They love their wrestlers there, and it’s the home of the guy I consider to be the best wrestler ever, Shawn Michaels. Whether Shawn is there or not, though, the fans are always into it. Source: JasonParis
They’re Boston strong, and they’re another WWE town. I remember wrestling Chris Benoit there at the Royal Rumble, and it was such a memorable match. Triple H came up to me when I got through the curtain, shook my hand, and said, “You just raised the bar.” That was really special to have him say that. And then the crowd gave (Chris) Benoit like a 10 minute standing ovation, and Vince just let it continue. Watching that makes me really appreciate the times I had wrestling a guy like Chris. Source: Flickr user jpowers65
Detroit is a hot town, especially Joe Louis Arena. Even though it’s not their newest arena, it’s got a lot of tradition. What I remember most about Detroit is even when we did house shows there, like when I’d wrestle Triple H, the paycheck from the show would be pay-per-view caliber. Detroit fans pay hard-earned dollars to watch you wrestle, and you get paid well for being there. My most memorable match there was with The Rock and The Undertaker, and it flowed so well. There was never a dull moment, and everyone brought great ideas to the table. As complicated as the match may look, it was one of the easiest matches to wrestle because of the guys I was in the ring with. Source: Flickr user Fido Factor
My fondest memory of San Francisco doesn’t even involve me. It’s when I saw Eddie Guerrero win the world title there against Brock Lesnar, because the place just unraveled. The funny thing is they oversold the building by 800 people because everyone wanted to see Eddie. The fire chief actually came by to try to clear people out. When people show up in big numbers to see their heroes, Vince will try to figure out a way to let them do it; I’m sure the fire chief fined him. Source: Flickr user bignavijp
The Japanese fans watch and study the matches, and they just have a different mentality and psychology than American fans. They appreciate the art of wrestling way more than the entertainment aspect. I had a big match with Brock there at the Sumo Hall, but my match with Yuji Nagata at the dome was more memorable. At the time, Brock was sort of just wrestling to have something to do while he was preparing to enter MMA, while Yuji and I had the crowd in the palm of our hands. He’s one of the best, most charismatic guys I ever wrestled. Source: Flickr user vinqui
It doesn’t matter if it’s WWE or TNA; the fans show up regardless. The ratings over there for wrestling are far higher than they are for the United States, and they just love it when American wrestlers come over. My favorite match over there was with A.J. Styles. You can’t have a bad match with A.J., and we went for over 40 minutes. When you watch it though, you’d think it was 10 minutes long. He’s one of the best athletes I’ve ever been in the ring with. Source: Jon Dawson
Pittsburgh has a great wrestling tradition from the days of Bruno Sammartino. It’s very old school, and the fans are so loyal. If you’re a hero in Pittsburgh once, you’ll always be a hero there. That goes for Bruno, and Ben Roethlisberger, and Terry Bradshaw, and even me as an Olympic gold medalist. And the fans also understand the psychology of wrestling, so it’s not hard to get booed there, either. Sometimes I’d have to go out and make sure the fans were prepped to boo me, which was always fun. I remember when they booed me during a match with The Rock, and I grabbed the microphone in the middle of the match and told the fans they shouldn’t boo me because I was born in Mercy Hospital two blocks from there. Dwayne hit me from behind, grabbed the mic and said, “It doesn’t matter where you were born!” The place went nuts. Man, I miss working with that guy.

Who is Movoto Real Estate, you might ask? Movoto is a national online real estate brokerage. Our blog has been recognized for its unique approach to city-based research by major news organizations around the world such as Forbes, CBS News, and The New York Times.