The IRON 8 is an NECW tradition and one of the area’s premiere wrestling events of the year. Billed as “the ultimate test of skill, stamina and strategy,” the IRON 8 is an event like no other. 8 men are selected by the NECW Championship Committee from both inside and outside the NECW ranks. They are then paired into 4 one on one match-ups. The four winners of the opening round bouts then go on to face each other the same night in a four way, 45 minute iron man match. The man who scores the most pins or submissions in the 45 minute period is the winner and the 2014 IRON 8 Champion.

In order to win the event, a wrestler must be capable of wrestling for an hour – first against a top flight competitor on a one on one basis, then against 3 other opponents in an all out battle for athletic supremacy.

All 8 competitors in the 2014 IRON 8 have been announced and they are:  Anotnio “The Promise” Thomas, who won the event in 2009, Sean Burke, Brad Hollister, Damian Wayne, Dirty Money, former 2CW Champion, Jay Freddie, making his NECW debut, the high flying mysterious masked man, El Todo Loco and making his return to NECW and appearing in his second IRON 8, “Sensational” Scott Levesque. 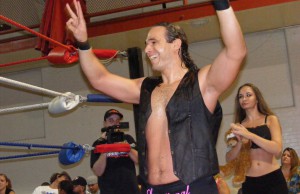 In addition to the tournament there will be one additional match, a special “Champion’s Challenge” mixed tag team match. NECW Heavyweight Champion, Slyck Wagner Brown will be replaced by “The One Man Thrill Ride” Jimmy Preston as he teams with Alexxis Neveah to battle NECW Television Champion, “The Masshole” Mike McCarthy and World Women’s Wrestling Champion, Mistress Belmont.