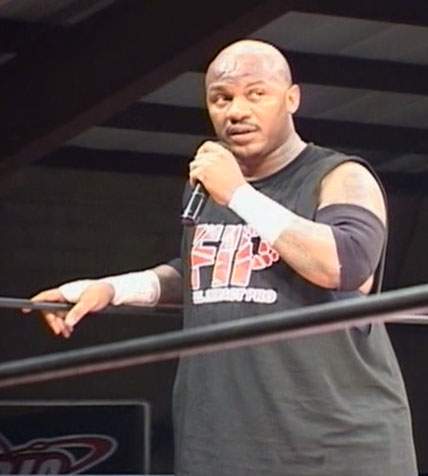 New Jack was the guest on the November 26th edition of the In Your Head Wrestling Online show, hosted by Jack, One Inch Biceps and Barbie Richards at http://www.inyourheadonline.com

New Jack is welcomed to the show and mentions his new federation 2XFW. New Jack says it stands for 2 Xtreme F’ing Wrestling. If it has New Jack’s name on it, it has to be something different. New Jack says it won’t just be hardcore it has to be something that relates to him. It’s not a family show, if you want to bring your kids that’s your business. You don’t know what you will see on his shows, maybe a t*tty popping out in the ladies match, New Jack doing blood and guts and fire. New Jack runs down some of the roster including names like Axl Rotten and Mad Man Pondo.

New Jack says December 15th he will be taking on Pondo in a “Someone is Gonna Die Death Match” at the Blood Bath show in Cincinnati, OH at 3509 Warsaw Avenue. Jack says he and Pondo go way back and going to do what they do best, beat the hell out of each other.

Host Jack asks if New Jack wanted to start the promotion. New Jack explains he was in a bar one night and a buddy of his said he has a building in Cincinnati that he was gonna get rid of and gave the keys to New Jack to do his own thing. New Jack says he wasn’t looking to do it but the chance came up. He says people are tired of what Vince is doing, people will travel from other states to see what New Jack is doing.

New Jack talks about Vince McMahon’s motivation behind the new ECW. He agrees that they started it to kill off the legacy of ECW. Vince doesn’t have the mind to do what ECW started, now people laugh when they hear ECW. Vince killed the name. New Jack says he couldn’t get enough money, then jokes will yes he can, to work there. He says look at Balls Mahoney he isn’t worth a dime now, WWE made him look like a joke.

Host Jack asks if WWE asked New Jack to be a part of the new ECW when it started. New Jack says he wouldn’t because the first thing they do is want your name, no one will pay to see Jerome (his real name). You don’t hear “we want Jerome” chants. New Jack says Vince would buy his name and character then put it on the shelf.

New Jack says the guys in ECW now were fans when he was main eventing the original ECW. He wouldn’t put those guys over, he might stab those guys though.

Jack asks if WWE ever said New Jack couldn’t use his name, like “King of Old School” or “Justin Credible”. New Jack says no, but the guys who go there they make into a memory.

New Jack talks about taping over an hour of footage for the recent CNN special. He said he was very anti WWE saying Vince was a rapist and a murder etc and has gotten away with it for years. New Jack claims Vince wouldn’t let CNN use him on the special. New Jack says all the interviews on it were hand picked by Vince.

New Jack talks about the hand picked interviews on the CNN special saying Vince didn’t use steroids or isn’t all bad and that Chris Benoit wasn’t such a bad guy. New Jack says yes Benoit was a bad guy, “when you choke your kid and murder him and your wife you ain’t nothing good and nobody should ever say anything good about you again in life”. New Jack says no one should defend that mother f-er.

New Jack says his opinion on Vince McMahon is he in the same level as Saddam Hussein and they should string him up by his neck and hang him. He doesn’t give a sh*t about him and never did, anyone who defends Vince McMahon is getting a check from him.

New Jack says he never liked Paul E for the same reasons he doesnâ€˜t like Vince. New Jack isn’t an ass kisser like Tommy Dreamer and Taz etc were for Paul Heyman. New Jack says he was in prison for 3 years and didn’t get f’d then and he won’t now.

New Jack doesn’t believe in ass kissing, he won’t play the game. New Jack says he got himself over by being real, and the people know that. New Jack doesn’t care who it is, he won’t take any bullsh*t. He says Paul E tried to kill him by making him do jobs after he cut the kid (referring to the Mass Transit incident). New Jack says he will do the job he doesn’t care, so he started diving off stuff to keep himself over. So when he jobs people don’t remember that they just remember his big dive. ECW died 8 years ago and his name is still over.

New Jack says f*ck Paul Heyman, heâ€˜s another crook, he is Vince’s lieutenant. He sold his company to Vince McMahon after filing bankruptcy, it was a scam. Vince bought ECW so he should have bought Paul’s debt too. New Jack never got the $3 million that Paul E owed him. He hopes Paul E gets hit by a fruit truck and killed. New Jack says all the guys who came to work for WWE after ECW folded had to agree not to sue Paul E as a stipulation before working there. New Jack says he is 44 years old and he won’t play the game, if you mess with his money he will kill you. Now Paul E makes $5000 a week to sit home and hasnâ€˜t been on TV for a year, just so he can be Vince McMahon’s butt buddy. New Jack hopes Paul’s momma dies of a heart attack.

New Jack says to come out to see him at the December 15th 2XFW show in Cincinnati. He says he won’t have guys going “f this f that f this” but if they swear in a promo that’s fine. If people want to bring their own bottles and drinks, he doesn’t care bring it. It’s his show and he will do what he wants. He says he hired all his boys to work the show.

Jack asks if working on the creative end was something he always wanted to do. New Jack says he helped Paul E. come up with a lot. This new company will be all his and their will be some retarded stuff on the show.

New Jack says January 5th he has a show with all backyard wrestlers. If you live in the area email New Jack at [email protected] or visit his myspace at http://www.myspace.com/newjackuncut and contact him about being on the show. New Jack invited anybody, they don’t have to have any experience. They can kill each other and New Jack will just say good match. New Jack never did it himself but he gets a kick out of watching it. They don’t know what they are doing they just kill eachother, if people don’t like he doesn’t care.

OIB asks a question from RJD on the IYH message board, what are New Jack’s thoughts on WSX. New Jack says it was just a spot show. You had to come out doing moonsaults, it was a 30 minute show so it only had 22 minutes of wrestling with 4 minute matches. It gave some new guys some exposure, anyone who knew anything knew it wouldn’t last.

Jack mentions the current WWE 24/7 Legend of Wrestling edition where they talked about legit Bad Asses in the wrestling business where Mick Foley picked Gypsy Joe. New Jack says that means absolutely nothing to him. Foley probably picked Joe because he felt sorry for him, since Jack beat him up with a baseball bat. New Jack says Foley picked Gypsy Joe and not New Jack because Foley couldn’t follow him with a GPA. Foley was going through padded tables so f him. He was just saying I’m picking Gypsy Joe and not New Jack. New Jack says he doesn’t give a sh*t about “Nick Foley” or “Cactus Foley” or “Jack Nick” or whatever his name is. He’s just a charity case. He was thrown off a cage on a padded table and made to look like a big dea, New Jack was thrown off higher places.

OIB asks New Jack about Dog the Bounty Hunter. New Jack says f that no good racist m-fer (with several other phrases thrown in there). New Jack says nobody saying he did it, Dog did it. It wasn’t an accident the n word doesn’t accidentally come out of your moth you have to think about it. New Jack says the whole show was a joke with his big fat wife, you didn’t give big speeches when he was bounty hunting. You just locked them up.

Jack and New Jack talk about the possibility of a Reality Show. If anyone out there is interested in that idea and could sponsor it email Jack at [email protected] New Jack says it can be him his side kick and a one gold toothed woman.

New Jack says “I’m going to say to you, your co-hosts, all the people out there…what the slave owners said when he freed the slaves…bye n*****s”

For more information on New Jack and 2XFW please visit…

You can listen to the full-length interview at http://www.inyourheadonline.com and new episodes Wednesdays at 8 PM EST including this week with Amazing Kong aka TNAâ€˜s Awesome Kong.

Related Items
← Previous Story Amazing Kong on In Your Head tonight!
Next Story → Recap of Mike Tenay on The Mayem Radio