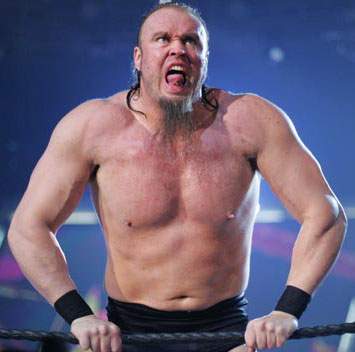 After bad weather caused their show on Friday to be postponed by a week, National Wrestling Superstars made up for the action on Saturday night February 27th, when they returned, after an absence of too many years, to Keyport, NJ’s St. Joseph’s Church Gym. A packed house of fans, looking to get their NWS fix this weekend, filled all corners of the gym as NWS put on another hot show.
As the National Anthem was about to play, the opening of the show was interrupted by Team Commando members “The Cold-Hearted Playa” Danny Demanto and “The Love Machine” Nicky Oceans, plus their manager Brittney Savage and “The Legend Killer” Helter Skelter. Demanto proceeded to insult the Keyport area and its fans before finally going back to the locker room, to the relief of the crowd.

In showdown of high-flying cruiserweights, Jon Justice defeated Mighty Mikey Pacifica. Justice, a fast-rising cruiserweight star, kept an even fast pace with the former champion Pacifica, but in the end had to cheat to win… when Pacifica missed a flying splash off the top rope, Justice rolled him up and used his feet on the ropes for extra leverage (unnoticed by the referee) to get the 1-2-3 pin.

In tag-team action, Michael Reigns & Luchador Manuel Manny Moore defeated “The American Turncoat” T.N.T & “Outlaw” Shane O’Brien. Big Bill Mills was the referee, and the past heat between him and T.N.T was prevalent throughout the match, as they got on each other’s case throughout the night. In the end, Reigns and Manny put down The Outlaw with a Hart-Attack-style running clothesline for the 1-2-3. An enraged T.N.T chokeslammed his partner for losing, then started throwing punches at Bill Mills, who bravely punched back before T.N.T overpowered and chokeslammed him too. A furious Commissioner Moore was ready to fine and suspend T.N.T, but instead announced that Bill Mills, who is in training to become a wrestler, would have his first match against T.N.T in May when NWS returns to the Bayshore area, and also announced that Shane O’Brien would be the special guest referee.

NWS Cruiserweight Champion Jumping Joey Janella retained his title in a triple-threat match against former champion J.D. Smoothie (with “The Legend Killer” Helter Skelter in his corner) and Trent Acid. The three cruiserweight standouts, which included Trent in his first NWS match in quite a long time, put on a thrilling hard-hitting and high-flying exhibition that had the fans on the edge of their seats the entire time. The ending of the match was tainted by outside interference… after a flying kick from Trent knocked Smoothie out of the ring, Helter Skelter hit Trent with a “Wet Floor” sign and knocked him out. Unaware, Janella landed a back flip on the prone Trent and got the 1-2-3. After realizing what had happened, Janella shook hands with Trent and promised him a rematch down the road. Trent was furious, and demanded a one-on-one match with Helter. Commissioner Moore announced that the two would meet in May when NWS returned to the Bayshore area.

The tag-team grudge match with The Nigerian Nightmares (with manager Voodoo Princess Sheeta) versus former WWE star “America’s Hero” The Patriot & The Famous Wrestling Clown (with special guest manager Coach Pat from the St. Joseph’s Baseball League) was declared a no-contest. This match proved to be one of the toughest challenges to the Nightmares’ undefeated streak to date, as Patriot’s strength and the veteran antics of The Clown kept pace with the raw brutality of the Nightmares. After leveling both Nightmares with a flying clothesline, Patriot and one of the Nightmares took the fight to the floor, but then The Commandos and Helter Skelter ran out and attacked Patriot on the outside. The Patriot was rescued from the beatdown by the appearance of former WWE stars Snitsky and Tito Santana, who also ran into the ring to stop The Clown from being pinned by the other Nightmare. The referee called for the bell and ruled the match a no-contest. Since Nicky Oceans and Kevin Matthews already had a match scheduled, Snitsky challenged Demanto to a  “Loser Gets Put Through A Door” Match later in the evening. Demanto insisted he have Helter Skelter as his partner and that it be a handicap match. Snitsky was fine with that, and said that whichever one of them goes through a door, it’s not his fault.

Former WWE hall-of-famer “El Matador” Tito Santana emerged as the winner in his tag-team match with him and NWS Heavyweight Champion “Corrupted” Corey Havoc versus The Commandos (former WWE developmental protege “Too Cocky” Kevin Matthews & NWS Junior Heavyweight Champion “The Love Machine” Nicky Oceans, with manager Brittney Savage). From the beginning, it was apparent that Havoc was not on Santana’s side, as he refused to tag in, and ducked out of the corner every time Santana came near to make the tag. The veteran Santana was gradually beaten down by The Commandos, and eventually Havoc as well, until The Patriot and The World Famous Clown ran in from the back to take down Matthews and Havoc. Santana then hit his flying forearm finisher on Oceans and got the 1-2-3 for the victory.

In the Main Event, former WWE RAW TV star Snitsky defeated “The Cold-Hearted Playa” Danny Demanto & “The Legend Killer” Helter Skelter in a handicap “Loser Gets Put Through A Door” Match. Despite the double-teaming of Demanto and Helter, Snitsky’s power was enough to keep them at bay. Towards the end, Demanto hit Snitsky with a chair, then climbed to the top rope as Helter held Snitsky down on the door which was draped across a pair of chairs, intending to smash Snitsky through it and win the match. But then suddenly Trent Acid appeared at ringside and knocked Demanto off his feet, cauding him to spike himself on the turnbuckle. (Ouch!) Snitsky then overpowered Helter Skelter and smashed him through the door twice, and Demanto once as well for good measure, earning the victory and sending the fans home happy.

Related Items
← Previous Story AS I SEE IT: Independent Promotions 101
Next Story → WSU 3rd Anniversary Show is This Saturday!