Home / Podcasts / Outback Jack on In Your Head recap

Outback Jack on In Your Head recap 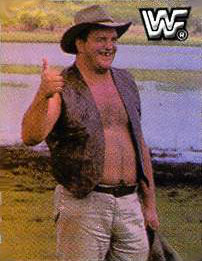 InYourHeadOnline.Com, the premier wrestling online radio program hosted by Jack and OneInchBiceps has 80’S WWF talent Outback Jack on the show. Outback Jack was known for his brief stint in WWF and his brief feud with Frenchy Martin and Killer Khan.

IYH is the premier wrestling radio show, and has had Chris Jericho, Vince Russo, Mick Foley, and Awesome Kong amongst it’s long list of guests.

The show starts off with the familiar IYH theme and we are off. Jack welcomes us to the show with his co-host, One Inch Biceps. The show starts off with a brief discussion of the movie, “Signs”. Jacks brings up that the only wrestler he’s ever had a poster of was Roddy Piper. OIB bings up Piper’s confrontation with Santino, and Santino’s recent DUI. Jack states that Santino is his favorite promo guy to date. Jack talks about TNA, and how they beat WWE Raw and Smackdown in the ratings in Australia.

A caller from Portugal calls in, and asks Outback Jack who helped him out and who tried to sabotage him in the WWF. Outback Jack states that Hillbilly Jim, JYD, and Hulk Hogan helped him out while Bobby Heenan treated him poorly. The caller asks about the state of Australian pro wrestler. Outback Jack answers that he no longer lives in Australia, but he heard that WWE opened up an office in Sydney. For the record, Outback Jack lives in Florida. 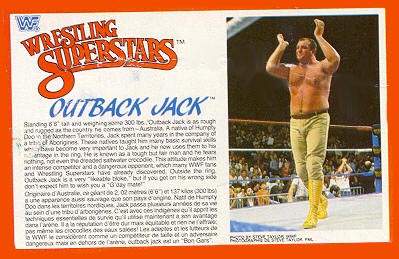 Although Jesse Ventura used to call Outback Jack, Outhouse, Outback has no hard feeling towards Ventura and even considers him a friend. One Inch Biceps asks a question regarding Killer Khan. Outback calls him a good guy, but was the laziest guy he’s ever met. Outback Jack states that Steve Strong tried to intentionally beat him up in a ring, but after the match he beat up Strong. Regarding the travel in the 80’s WWF, Outback states that the travel wasn’t bad, but he took various chemicals to help him cope. Outback Jack admits that he used steroids. He goes into a lengthy discussion about the affect of steroids and whether they should be illegal. Outback says that he is a conservative, but believes marijuana should be legal.

One Inch Biceps asks if he was ever approached about a WWF Legends Contract. Outback says that no he hasn’t, but he did have a good selling doll when he was in WWF. Jack states that guys call their doll-action figures. 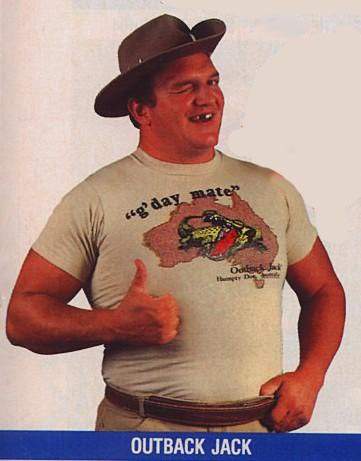 Remember, if you want to listen to entertaining interviews with such stars as Percy Pringle, Bill Goldberg, Tully Blanchard, Alex Shelley, ODB, and Gary Hart just go to www.inyourheadonline.com

After the interview Jack found that Bushwacker Butch is opening a wrestling school in New Zealand. The hosts talk about the WWE wanting a multi-cultural group of giants. They talk about Nathan Jones, and if he was wrestling in the 80’s he could of been huge. They then talk about Heidenreich’s clip of him thrusting behind Michael Cole that was aired on Raw a few weeks ago.

The hosts bring up the state of the WWE announcers. OIB and Jack disagree about Michael Cole. Jack, who is a huge fan of Mike Adamle thinks he will be the new Gordon Solie. Jack also states that the best play-by-play guys were former wrestlers. OIB says that he is de-sensitized to Tazz now that he is an announcer. Jack brings to light that he was never a fan of Gorilla Monsoon, even though he liked the pairing of Monsoon and Heenan. Jack says that Jim Ross knows how to make a moment seem legendary (the Austin stuff, Foley falling of the cage, and Flair’s last match). OIB and Jack both agree that Tony Schiavone got a raw deal, and that the last year of WCW ruined his legacy. A caller calls in and threatens to hunt down Jimmy Jacobs for the way he’s treated Lacy. OIB says that Jimmy Jacobs can’t wrestle, and all he does is wear eye-liner and cries.

To hear this interview and show in it’s entirety please visit http://www.inyourheadonline.com and live every Wednesday at 8 PM EST including this week with Vampiro !!!