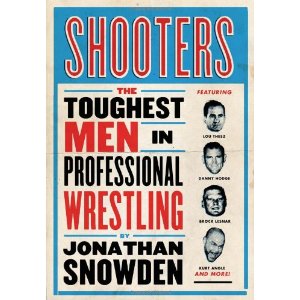 OWW is pleased to announce the release of Jonathan Snowden’s excellent book, Shooters: The Toughest Men in Professional Wrestling.  The official press release is shown below, followed by a book review by OWW correspondent Kyle Davidson.

“SHOOTING” on SHOOTERS: THE TOUGHEST MEN IN PROFESSIONAL WRESTLING

Jonathan Snowden takes us on a journey, a journey in time. He takes us from the beginning of wrestling through to the modern day tough guys. It covers men such as Farmer Burns, William Muldoon, the “Strangler” Lewis, Frank Gotch, Kurt Angle, Ken Shamrock, Greg Gange, and one of the all time toughs, Lou Thesz, to name but a few. He walks us through the evolution of a sport to an entertaining art form that millions of people from around the world love today. He takes us to the dawn of wrestling through to the WWE’s Daniel Bryan, who up until Wrestlemania (in April 2012) was the company’s World Champion. It covers the roughest and toughest wrestlers the world has ever known, and gives us the insider’s news, the facts and the things we may never have known.

In a day and age where books are replaced by movies and social media chats, reading is becoming a lost art. However Jonathan has put out an easy to read, fact filled book. The book has a great flow, and takes the reader to the time in history he is writing about.

One of the things I noticed upon reading the book is the fact that it does a good job of making a historical event seem modern. He took an event that occurred in 1910 for example and gave it a modern feel. One of the best examples that stood out in my mind was the match between Frank Gotch and George Hackenschmidt. It reminded me of the Wrestlemania we experienced this year, seeing The Rock face John Cena. It showed similarities, such as the both occurred in early April. The main bouts both saw bests of their respective eras. Both had what we call a big fight atmosphere and drew large crowds (for their respective times).

Other names to that fans can look forward to are names such as Brock Lesnar, Bobby Lashley, Danny Hodge, The Funks, Eddie Graham, Harley Race, Cain Velasquez, Shane Carwin, “Dr. Death” Steve Williams and many more.

The book consists of about 300 pages of well researched stories, interesting facts and legitimate tough guys. All together a great read, and a book that touches more than just the wrestling business, as it covers someUFCand otherMMAas well. I think Jonathan Snowden and the guys at ECW Press have published a must read book, and a great addition to any readers collection.