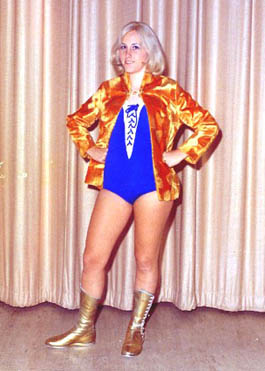 The ORIGINAL from the 1960’s was Joyce Fowler

J. Michael Kenyon wrote: I am far from an expert on distaff grapplers. But what I think is this:

Joyce Fowler, born circa 1946, and who married George Becker in 1968 (and was married to him 31 years until his death in 1999), was trained by Fabulous Moolah.. She worked very briefly as Barbara Nichols and toured the then-WWWF as Joyce Grable (along with Moolah) in 1967-68 … then became Joyce Becker after the marriage. Her career on the mat lasted approximately from 1964 to 1973.

The “famous” Joyce Grable (whose real name was Betty Wade — according to you) was trained by Moolah and began wrestling, I think, around 1974, at age 22. They billed her sometimes as the “Golden Goddess.” She was a big star in the 1970’s and 80’s and traveled extensively. In recent years, she has made appearances at the Gulf Coast reunion. The main portion of her career went through the late 80’s.