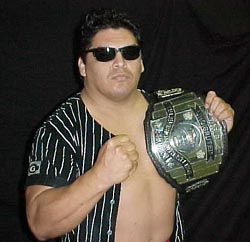 I feuded with Manny Villalobos in the early part of his career while under the Joe Blanchard promotion Southwest Championship Wrestling. Went to CMLL promotion in Monterey, Mexico and briefly teamed with Pirata Morgan and Jerry Estrada, in a version of Los Bucaneros. Sold out the Colosio in Monterey vs Rudy Reyna in a Hair vs Hair match. carried the Texas Jr Heavyweight belt into Mexico and lost it to Arandu, in Monterey, but regained it the following night in Cd Victoria. had memorable matches vs Black Gordman in Guadalajara, Mexico.