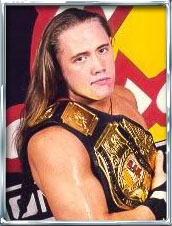 LordsofPain.net writer Daniel Pena reports that Christian York appeared on the Shining Wizards podcast (available at ShiningWizards.com). Highlights from the interview are as follows:

On how he got involved on Gut Check: “I was working in MCW (Maryland Championship Wrestling) and TNA was doing a house show in Bowie, Maryland, and the agents asked for a list of 10 guys, and I was one of the 10. I was eating breakfast with my wife,and they gave me call saying, we want to use you on some house shows and get a look at you. So I did that, and they called me back about doing this Gut Check.”

On the Gut Check Experience: “They told me it’s all a shoot, it’s all real. It’s not scripted stuff or anything like that, and we did that. We went from there, they did the profile thing with me, and then the match with Zema (Ion), which was pretty wild. All day long you don’t know anything, its just like a rehearsal type thing. Just stand in the ring and we will go from there. Its all a shoot, they want raw emotion.”

The Boy Band Gimmick: “We started that in ’99. We weren’t really on board with the boy band thing. We were like, man, that’s gay. We were trying to be edgy, like every indy wrestler, trying to be cool as hell. We wanted to be called Fourplay, but we ended up being the Badstreet Boys. It worked, we had tons of girls as fans. Kanyon had seen the gimmick and had the idea of getting Shane Helms and Shannon Moore a tryout. Myself and Joey didn’t have any idea about this. Then Shane called and said, hey, man, we just got signed, and I was like, did we get signed? And he was like, no, they are gonna give you a tryout, we are gonna do the boy band gimmick with Evan (Karagias). ”

On WCW not being around: “I miss the hell out of it, man. I wish it was still around so guys would have a place to work.”

First Run with WWF/ECW: “After we got released from WCW we had a no compete clause, 120 days. We waited and we just said, let’s go there and try to get on. And we got on, it was pretty cool. They let us do dives and like all kinds of stuff, stuff that unheard of. They were like, just go out there in tear it up. So we did that, and they liked us and stuff, but we looked like kids compared to the cast of characters in WWF at the time. So they said why don’t you go to ECW and go there and get over, get seasoned, and then come back here. We got in touch with Tommy Dreamer, and they were already interested in us, so we went there and off we went.”

Question:  What is your favorite Christian York match?