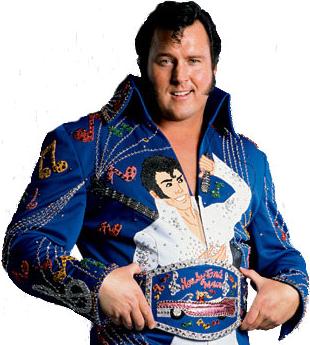 LordsofPain.net writer Daniel Pena reports that the Honky Tonk Man appeared on Kayfabe Wrestling Radio with Alan Wojcik and Spug (interviewavailable atWildTalkRadio.com). Highlights from the interview are as follows:

Working in Calgary before coming to the WWE:  “I was still very active in Calgary; in fact, I was the North American Heavyweight Champion I think at that point in time, or if I’m not mistaken… yeah, I think I was because Ron Starr, my partner, we were tag team champions and when those guys left and went to the Maritimes for the summer; and at that point in time I was picked up by WWE, so it was through the good graces of Stu Hart that he brokered the deal for me and gave me the rite of passage to leave Calgary to go over to the WWE. You know, Stu was the nicest guy in the world and would never hold anyone back and of course his son, that being Bret and his son-in-law, Jim ‘The Anvil’ Neidhart, the Dynamite Kid and Davey Boy Smith. They were, all for of them, there at the time and had went over the year before, then I came over and shortly after that I kind of left it off where Bad News Allen, which became Bad News Brown in WWE, and he came over shortly after me, six-eight months later, and that’s how it went.”

How much of the Honky Tonk Man was personally created and how much was by Vince:  “That’s a very good question; I like how you put it, because it was one of those things where I had started this character down in the Southeast wrestling with the Fullers, Robert and Ron Fuller; Robert being, of course, Col. Rob Parker in the WCW days. And then, I took the character up for Stampede Wrestling, for Stu Hart and the Harts; worked on it and developed in down in the Southeast down in the Mobile and Pensicola area, then took it up to Calgary and then came back to the Mobile/Pensicola area, then back to Calgary again.

“So I spent three-five years working on this character: the black hair, the jumpsuit, the guitar thing, the interview style and all of that, so when I went over to interview with Vince McMahon; he wanted me to bring a tape so he could see something, a little piece of a match and of course some interview stuff.  Their first thing was, back then there was no creative department or anything, there was just Vince and pretty much Howard Finkel, Pat Patterson, Arnold Skaaland; I mean, those were the guys in the office when I went over there. He looked at it (the tape) and saw these visions of black sideburns and the sunglasses; he saw little foamy guitars and little jumpsuits. Vince was always into the marketing part of it.

“The wrestling thing, I heard you say earlier as part of your intro ‘you’re not supposed to say ‘wrestling’; Vince was not really into the wrestling part of it. I mean, he loved it and that’s his life, but what you did in the ring was secondary to what he had planned for you. But I had developed this character to be a bad guy, not a good guy and he envisioned it as a good guy, but eventually about six months later, it eventually went back to what I had developed, which was the bad guy character.”

Being an entertainer and perceived as a ‘cartoon’ style character working with WWE in the ’80s:  “You know, it was never something that I had a problem, because there’s so many people who have said those nasty things about me over the last few years; that I was terrible in the ring, I couldn’t wrestle, I couldn’t what they call ‘work’, I was not technical by any means and all. Well, you know, thank you very much; I have never considered myself to be a wrestler. I have always been an entertainer; I entertain people and I happen to be in sport entertainment or I like to call professional wrestling ‘theatrical athletics’ and anybody who says its different must be living, they obviously come from somewhere else. But Vince understood the entertainment value of what we were doing and consequently he had a group of guys there that were entertainers and that’s what we did.”

If he thinks he would have been as successful with a different manager, other than Jimmy Hart:  “I think it would have been a little more difficult. It’s like I said, I don’t know if the gears would have clicked as much with; you know Bobby was more, and I know that, from just my conversations with Rick Rude over some periods of time. Rick was one of those guys that; Rick never thought that he needed a manager, in fact, and he really didn’t. Rick was a good mouthpiece himself and of course Bobby is a mouthpiece and Bobby was Bobby and was already well established as a bad guy and had been thrown in with weasel suit matches and things like that.

“It’s difficult when your manager, when the fans are yelling while you’re in the ring and you’re trying to get your persona and get your character developed and get the fans to watch you; and your manager is outside and they’re chanting ‘Weasel, Weasel, Weasel’. So, Rick had the problem a little bit; he thought he should have the microphone time. And Bobby was a great mouthpiece, I mean, he was fantastic on a microphone and he was perfect for someone like an Andre the Giant. He was perfect for someone, like when Captain Lou Albano was always the talker for someone, or you know The Grand Wizard. Mr. Fuji wasn’t as much of a talker as a manager; I know when he managed Don Morocco, Don did all the talking and Mr. Fuji just kind of stood there and smiled with his devious smile and facial expressions. So, I don’t know if I could have done as well with someone else other than Jimmy.”

His historic Intercontinental Title run and how it started:  “It was, in bookings gone past, Vince’s father’s way of doing things and it was with a lot of promoters and bookers; they would tell you ‘Yes, we will start you (on a title run) on this date and six-eight months from now or thirteen months from now, you’re going to finish. I went to Puerto Rico and I had a starting date and they told me like nine months; when I went there it would be like nine months later, I’d be leaving on this particular month on this particular weekend and this was when I was going out, this is how they did it. But no, when it came to what we did, the way Vince (Jr.) was doing it, it was strictly on ticket sales, it was ‘Hey, if you can get the job done, you’re going to run with it.’

“And that was the whole thing with me, when they mentioned Butch Reed’s not here and they were in a panic situation because Butch was going to get the belt from Steamboat and he wasn’t there; he was AWOL that night. I just happened to walk by and Hogan and Vince were talking and Hogan said ‘What about this guy?’ and Vince took a look and said ‘Alright, maybe so’ and he pulled me off to the corner and mentioned to me about the belt. I said ‘Hey, you know Vince, I told you when I first came here if you give me a chance, and I do good, pay me.

“If I don’t do good and I can’t make it, fire me and I’ll be gone. You won’t have to fire me, I’ll pack my bag and leave.’ And that was our deal, our handshake deal and that was the way it was with the intercontinental belt. I said ‘Believe me, I don’t want a day off.’ He said, “Well, everyone needs a day off. You’ll burn out and you need to see your family every now and then.” And I said, “Listen, if you give me that belt, I will run with it as long as you want me to and as long as I can sell tickets.’ He said, ‘Ok, I like that.’ And that’s how it happened.”

If he ever had problems with people during the IC Title run:  “Naw, I never had any problems with that until I won the Intercontinental Championship. I had put, even with the belt, when Jake was on his hiatus or when Steamboat left, they were left a void there for a couple months of bookings for Steamboat that had to be filled with substitutes and anytime they had a substitute, the substitute would win and made it a non-title match and the substitute would win clean, 1-2-3. I actually lost more matches than I really won if you go back and look at this thing. The only time I ever won matches was on TV, on the TV Tapings, other than that it was a DQ or Jimmy Hart got involved; we always kept the belt somehow.

“Even Steamboat, he’s gone on record saying the one match he’s never liked was losing to an Elvis impersonator. Well, you know, I look at it like this; listen ‘Dragon’, you could have lost it to a guy in a skirt blowing the bagpipes, or you could have lost it to a guy with a snake, or you could have lost it to Hulk Hogan, hey Brother with the 21-inch pythons, or you could have lost it to Brutus ‘The Barber’ Beefcake and he could have shaved your head. You know, to say something like that, it struck a little chord with me and he was not the most professional that night. If people go back and watch this match, you’ll see I gave him about 90, or maybe 95 percent of the match was all his and let him shine and do all his stuff and by fluke and however it went down; we threw Jimmy Hart in the mix and Jimmy got hit and boom and this and I grab the rope, 1-2-3. And it was one of those things where I did everything to make this guy look good and make him be happy about it. After it was over and he back and we had return matches a couple of time, he was fine.

“You know, there’s been other guys; if Tito was here right now, I’d tell him, I hope he’s listening. Tito Santana; Oh, you’ve got to pull my feet, Jimmy Hart’s gotta hit me with a megaphone, we’ve got to knock the referee down. Oh, come on, I took that flying burrito elbow and never said a word about it, 1-2-3. But when it comes time for those guys to do the favor, it was like, ‘Naw. Can we do this? Can we do that?’ There was a couple of times that went on. Yeah, you know, I never ever said anything about any of it until that came up with the Macho Man thing, and it nothing to do with Randy; Randy and I talked about it. It was all about the television thing with 35 million people.”